The Best Filipino films of 2016 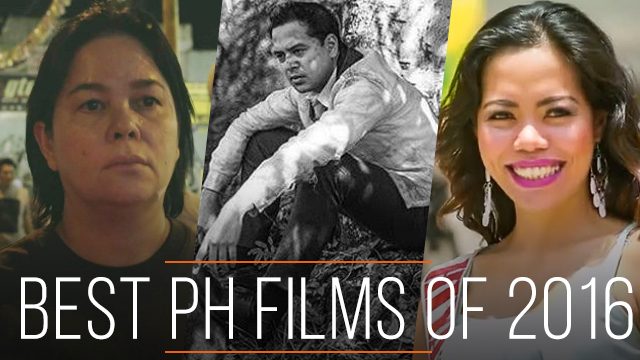 2016 will likely be remembered as the year when the whole world clamored for change and received it with all its extreme implications.

Riding on an overwhelming wave of discontent citizens who felt betrayed by how Aquino’s administration seemed to have abandoned the change it promised, Duterte took over the nation, quickly unleashing policies and actions that made the public know that change has come. Upholding human rights – then a sacred covenant between the government and the people it safeguards – has been overtaken by the need to rid the streets of addicts and criminals. All of a sudden, history, which had been concretized by years of institutionalized education, has become so malleable, with the term “revisionism” being thrown around either in  anger or complacency, depending on which side you’re on.

Cinema did its part.

It offered escape, eased the conscience, and perpetrated a feeling that everything is, or will be, fine. Romance is still the talk of the town, with films like Mike Tuviera’s Imagine You & Me, Dan Villegas’ Always Be My Maybe, and Gino Santos’ Love Me Tomorrow earning millions of pesos by repeating the timeless mantra that love conquers all. And it has for the most part of the year, except that nearing the end, Vice Ganda and Coco Martin came defiantly marching, armed with Joyce Bernal’s The Super Parental Guardians and its dangerous mix of relevance and inanity, reaping profits with its brand of brazen hilarity at whatever cost.

It also exposed truths otherwise drowned by the real world’s noise and vitriol. It opened perspectives, rationalizing the madness with discourse that elucidate with both conviction and precision the current state of the nation.

Filmmakers, divided by process, taste, and politics, are united by their need to express opinions. And they did express this with all the might they can muster, turning 2016 into the year when cinema became that beacon of everything that is right in an age when everything feels wrong. The myriad of voices, opinions, themes, and narratives bravely put forward by filmmakers proved that despite the scathing and boisterous discord, there will always be culture to put everything in the arena of productive discourse.

This was most apparent during the Metro Manila Film Festival, which was abruptly reformed from a blatant cashcow into a showcase of intelligent and affecting craftsmanship. Moviegoers, who have been trained by Hollywood and its local copycats to treat cinema as a mere commodity for instantaneous happiness, are now discussing films, debating, arguing, even fighting – all in the name of their personal assessment as to what makes a film good and worthwhile. It is no longer enough that they laugh or cry. (READ: MMFF 2016 revamped: 10 important changes to know)

2016 has produced a lot of gems like Saving Sally, Avid Liongoren’s labor of love; How to be Yours, Dan Villegas’ ode to love amidst shifting priorities; T. P. O., Joselito Altarejos’ scathing examination of a crumbling marriage in a bureaucracy that offers no escape; Tuos, Derrick Cabrido’s elegantly weaved portrait of myth merging with reality, and a lot more. So coming up with just 15 movies to sum up an entire year marked by division and diversity is a daunting task.

John Torres playfully converts the decaying reels that represent the personal trauma of 80’s sexy star Liz Alindogan in the hands of legendary director Celso Ad Castillo, into a multi-layered exposé of the oppression that exists both at the filmmaking set and in the country under the Marcos regime.

2. Women of the Weeping River

Sheron Dayoc concocts a beguilingly lyrical and emotionally exhaustive exploration of the Mindanaoan conflict through the story of recently widowed Satra, played evocatively by newcomer Laila Ulao. Satra gets trapped in the middle of clan wars, painfully reminding Fatima of the humanity she has lost after suffering the same fate.

Lav Diaz’s 8-hour opus merges literature, folklore, and history to dissect a nation  conceived from the divisions and fractures resulting from a flawed revolution. Ambitious in scope, context, and for the attention it demands from its viewers, the film is an immensely important work, one that challenges not just because of its length but also due to its ability to confront the sins of the distant past for a nation’s current failures.

Eduardo Roy Jr’s third film feels like an exhausting, meandering piece of poverty propaganda, but it is undeniable that the film resonates on an emotional level. Its profoundly comprehensive coverage of a homeless couple searching the city for their kidnapped baby provokes sensibilities, allowing the restoration of some humanity to those whose private lives have become public by societal decay.

Alvin Yapan bravely recreates the massacre of 4 hapless gold miners in a small village in Caramoan, exposing not just the blatant injustice that was committed against the community but also the discordant definitions of what justice is or should be in a society confused by so many overlapping conflicts and issues.

Lav Diaz once again looks into the past to paint the melancholies of the present. Essentially a revenge movie where a wrongly imprisoned woman, convincingly played by Charo Santos-Concio, plots to kill the man who was responsible for the injustice committed against her, the film morphs into a seething portraiture of a society of outcasts united by shared experiences with institutionalized inequity.

In a regime that exploits a national tendency to forget even the most painful of atrocities, Gutierrez Mangansakan II dutifully and unwaveringly presents unadorned, thorough accounts of the Martial Law experiences of people from the margins.

Brillante Mendoza’s film may very well be remembered for Jaclyn Jose’s impressively measured portrayal of a shrewd mother who is forced to stomach police corruption. However, the film, even absent the lauded performance, is a  relevant work, one that ought to restore humanity to the same people the current administration’s drug war has stolen it from.

Jun Lana’s film is absolutely endearing. It has just the right amount of humor and drama to elevate the story of a trans woman, played convincingly by Paolo Ballesteros, who even in death wishes to flaunt the queerness that has dealt her brief life with aches and struggles.

Petersen Vargas’ impressive debut film uses history to drape the coming-of-age of an overachieving teenager who is suddenly forced to face his own sexuality when he is befriended by half-American twins. The sentimentality of the picture is very much pronounced, but it doesn’t drown the essential political repercussions of the sordidness and power struggles that pervade the high school romance.

Extensively layered almost to the point of ambiguity, Keith Deligero’s third film is one beautiful mystery. Inspired by a Cebuano legend that parents use to scare children to go to sleep, the film expands on the household fiction, turning it into a document on flawed masculinity, of men and their fear of commitment.

It is nearly impossible not to be moved by Baby Ruth Villarama’s intensively researched documentary on domestic helpers in Hong Kong who become pageant contestants on Sundays. Compelling from start to end, the documentary proves that truth, when patiently sought out, can trump even the most cleverly crafted fiction.

Bradley Liew’s use of rock icon Pepe Smith to play his very own impersonator is more than just clever and ingenious; it is profound. With that one decision, the film unmasks celebrity, forcing a very real person whose fame has turned him into a character, to assess the faults and pains of his own mortality in the face of an immortality his dehumanized legacy has inadvertently granted him.

The love story at the center of Theodore Boborol’s film has been told so many times before that it risks being tedious. However, the delightful inflections that he peppers the film with – from the delightful courtship between the two lovers via text messages to the unabashed references to other romances it heavily borrows from – make everything feel brand new.

The abundant laughs that Jason Paul Laxamana’s black comedy offers come with a hefty price tag. Underneath the amusing bizarreness of the story of a failed mother, played astoundingly by Pokwang, who adopts and eventually falls in love with a blonde, Caucasian drifter is a scathing commentary on the country’s love-hate affair with America, which has taken the spotlight after the current administration’s drastic shift in foreign alliances. – Rappler.com