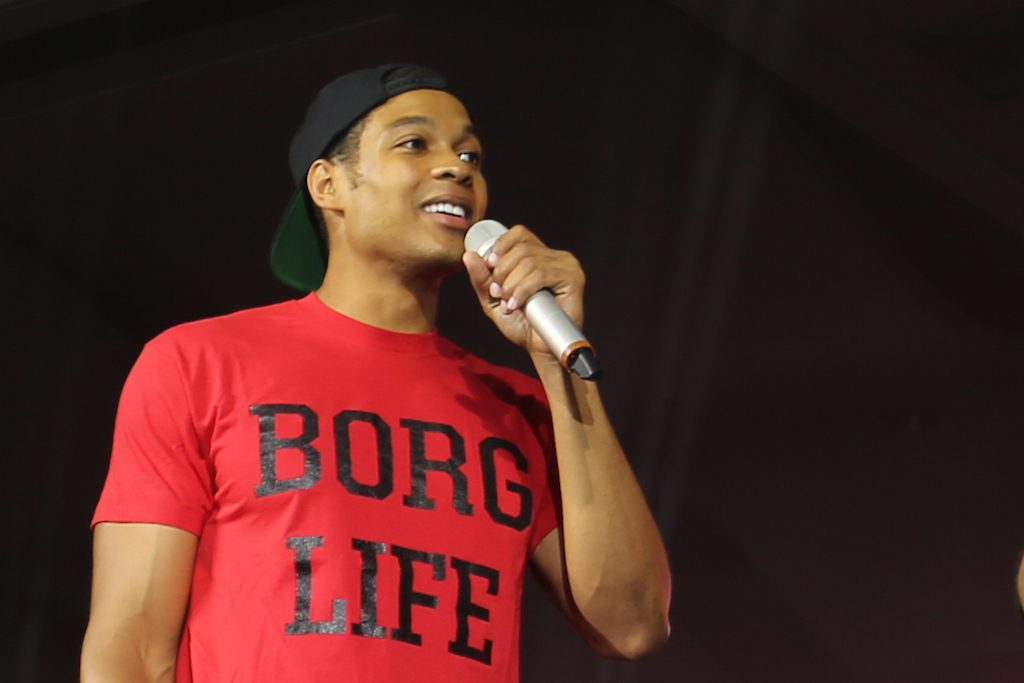 MANILA, Philippines – Cyborg isn’t exactly the most well-known member of the Justice League in the upcoming DC Extended Universe film. At the moment, the cybernetic character is eclipsed by bigger superheroes who have had their own Hollywood blockbuster movies like Superman, Batman, and Wonder Woman.

Like the character he plays in the film, Ray Fisher – whose background is mostly in theater – is perhaps the most low-profile of the Justice League cast, which includes already established DC stars Henry Cavill, Ben Affleck, Gal Gadot, and Game of Thrones alum Jason Momoa.

Being the new kid on the DC Extended Universe block doesn’t seem to bother Ray, whose energetic, easygoing presence quickly won over the crowd during his panel at the AsiaPOP Comicon on August 28.

The star kicked off the conversation by talking about how he reacted when director Zack Snyder told him he would be playing Cyborg in Justice League.

“When they called me up – and I was just under the impression they were just gonna say ‘listen thanks for coming out but we’re gonna go with a different direction for the role’ – and I’ve had myself prepared just in case…When [Zack] called me up, he said one sentence, and that was it, he said ‘Ray, looks like we’re making a movie.’” Ray said.

Ray dove into preparations for the movie right away, reading every comic he could about the character that he first encountered in the Teen Titans cartoon series from the early 2000s.

Cyborg is a man/machine who has the power to manipulate technology. Before becoming Cyborg, he was Victor Stone, a former student athlete whose body was wrecked in an accident that claimed his mother’s life. Victor was saved by his father through cybernetics – giving him his superpowers in the process.

For Ray, while Cyborg is a new and unfamiliar character for casual followers of the DC Extended Universe films, he has the potential to become a DC heavyweight, particularly because of his tech-related powers.

“While I know Cyborg was not an initial member of the Justice League, this is a new day, this is a new age. Our technology makes Cyborg extremely relevant,” Ray said. “Everyone’s got a cellphone in their pocket. You walk out of the house you feel naked without it. It becomes such a vital part of our lives.”

But for Ray, his character’s biggest strength goes beyond his ability to manipulate tech.

“I think what makes him strong has nothing to do with his superpowers…the greatest asset that he has is his heart. He’s a guy that’s gone through a lot of trauma, a lot of history…instead of letting that drama drag him down and turn him into a bad guy, he chooses to use his powers for good,” Ray said in a media interview the day before the APCC panel.

Cyborg’s fighting spirit is at the heart of “Borg Life,” a statement that Ray has been using to refer to his character.

Such positive and uplifting statements seem to come naturally for Ray, who spent a considerable amount of time during his panel hugging audience members, dancing with cosplayers, and joking with the host and people who were asking questions.

By the end of his panel, half the room had crowded around the stage’s fringes just to be closer to Ray, and as he exited, people were yelling their I love yous and crying out his name. Ray, cool as ever, took everything in stride, returning the love as best he could up to the very end.

With Justice League due out on November 17, it’s only bound to get crazier for Ray – though if anyone can wear superstardom and super powers well, it’s him. – Rappler.com