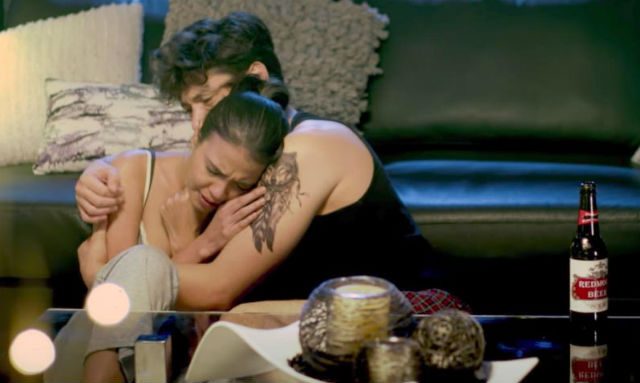 Facebook Twitter Copy URL
Copied
'12,' set in a house full of screaming, is a film that is painful to the ears

Dondon Santos’ 12 is a film bursting with many words that point to one inevitable direction: an amicable breakup.

Its central conceit, which is the exhaustive and exhausting dissection of how a seemingly perfect relationship can go wrong, is its worst mistake. The film doggedly latches on that singular idea, while neglecting plot, pleasure, and point. Sitting through it is really quite a test of patience.

Painful to the ears

12, set in a house full of screaming, is a film that is painful to the ears. It opens with the couple fighting, and preoccupies itself with prolonging the death their relationship. In an effort to grant the audience a glimpse of what the duo’s relationship was like before it turned into a shrieking mess, Santos pairs the numerous shouting matches with flashbacks of more pleasant ones. However, those brief joyous moments are not enough to give the relationship a sliver of character that would have made the audience root for it to succeed.

In essence, 12 is a film that drowns in negativity and how anyone can consider this entertainment is simply beyond logic. It can be argued that the film can be instructive about the aches of being in a doomed romance, but its insights are both specific to the fictional couple to be of any relevance and too convenient and conventional to be any way deep and telling.

Written by De Rossi, 12 is filled with statements that feel better suited coming from the pages of personal diary than the mouths of enraged lovers. The fake profoundness defeats the aim of aping realism. Simply put, all the flowery words turn into the poison and bullets that would ultimately kill the picture. (READ: Alessandra de Rossi on life after ‘Kita Kita’ and new movie ‘12’)

Moreover, the film’s perspective is lopsided.

It isn’t surprising that 12 favors Erika, as it portrays Antonio as the one ridden with more faults and less charm. However, De Rossi could have at least attempted to strike a more gentle balance in depicting the two imperfect individuals. It would have resulted in a film whose staggered presentation of a love story in its death bed feel more sensible.

It also doesn’t help that while De Rossi portrays her character with ample charisma and apt levity, Padilla bludgeons his with needless intensity. He makes no room for subtlety, and looks more like a man suffering from constant bouts of aneurysm than a lover trying to salvage a failed love. “I hate this romantic bullshit!” blasts Antonio while trying to stop Erika from leaving him.

By the end of the film, after suffering through inexplicably lengthy minutes of verbalized misery, it is very likely that one would shout the very same words at the screen. – Rappler.com