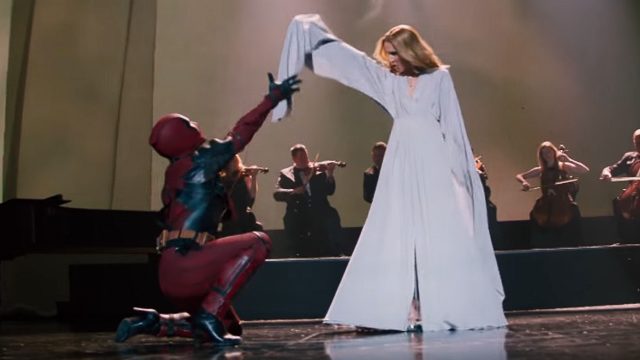 MANILA, Philippines – Celine Dion and Deadpool have teamed up for a dramatic music video for “Ashes,” a song in the Deadpool 2 soundtrack. (IN PHOTOS: Ryan Reynolds visits Seoul for ‘Deadpool 2’)

In the video above, which was released on Thursday, May 3, the pop powerhouse shows off her signature strong vocals as Deadpool performs graceful pirouettes in stilettos. Behind them, 6-string instrumentalists accompany Celine’s voice and Deadpool’s Flashdance moment.

Fans will also catch snippets of the upcoming movie, including a scene with Deadpool and his love interest Vanessa. (WATCH: Deadpool goes full on Bob Ross in new trailer)

At the end of Celine and Deadpool’s rousing performance, Deadpool says they have to do it again: “It’s too good. This is Deadpool 2, not Titanic. You’re an 11. We need to get you down to a 5, 5 and a half tops. Just phone it in.”

Not one to back down, Celine replies with sass: “Listen – this thing only goes to 11. So beat it, Spider-Man!”

Deadpool 2 will be in Philippine cinemas on May 16. – Rappler.com