MANILA, Philippines – When you’re making a movie based on a book that’s based on the very real lives of Asia’s upper crust, there’s no scrimping – particularly when it comes to clothing and jewelry.

“We had people lending us millions of dollars’ worth of jewelry. We had security guards around, and end dates, because they had to go back to the vault. We definitely couldn’t afford to buy those items or even rent them, because pieces like this don’t get rented,” according to Crazy Rich Asians movie director Jon Chu.

“Chopard and Bulgari lent us beautiful pieces and the actors really enjoyed wearing them,” she said.

But of course Michelle Yeoh, who plays the feared and revered Eleanor Young, used some of her own pieces too. Eleanor is the mother of Nick Young, Singapore’s Prince Harry and boyfriend to America-raised Rachelle Chu, who is blissfully unaware of the life Nick’s family really lives – until she flies to the city-state for the summer.

A ring that plays a big role in the narrative is one of Michelle’s personal pieces. Filmmakers had originally designed a ring for the purpose but during pre-production, they realized it wasn’t quite up to par. Michelle just so happened to have a similar one – “but much better,” recalls producer Nina Jacobson.

“She said, ‘I have a ring. Would this be good?’ And it was exactly right! It was similar to the one we envisioned, but much better. So, she generously lent it to us for the scene,” she said.

And while it’s easy to get carried away by the glitz and glamour that is the Crazy Rich Asians jewels and wardrobe, Mary Vogt made sure the clothes would never be the main event.

“For example, Gemma Chan (who plays Nick’s cousin Astrid Leong) wears fabulous outfits as Astrid, but audiences shouldn’t see the dress first. You should look at her and say, ‘Wow,’ and then, maybe a beat later, ‘Is that a Valentino?’” she said.

Here’s a quick roundup of the outfits and jewellery the main characters wore, based on notes from the production: 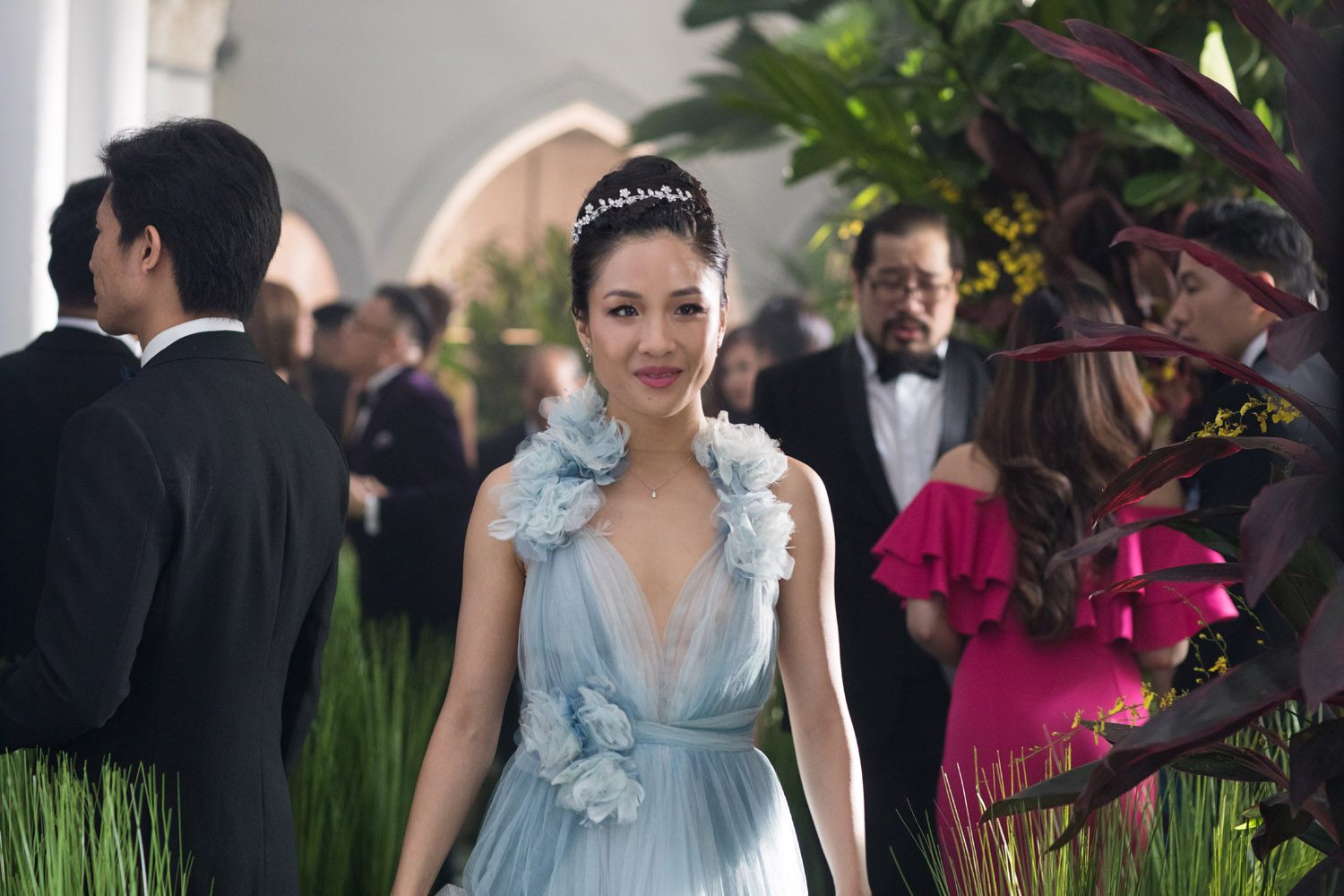 Rachel Chu’s looks reflected the challenges ahead of her. While in New York, where she teachers economics, she wears stronger looks. In Singapore, she wears a white and pink Giambattista Valli dress and later, a pale blue chiffon gown with fabric rosettes by Marchesa. 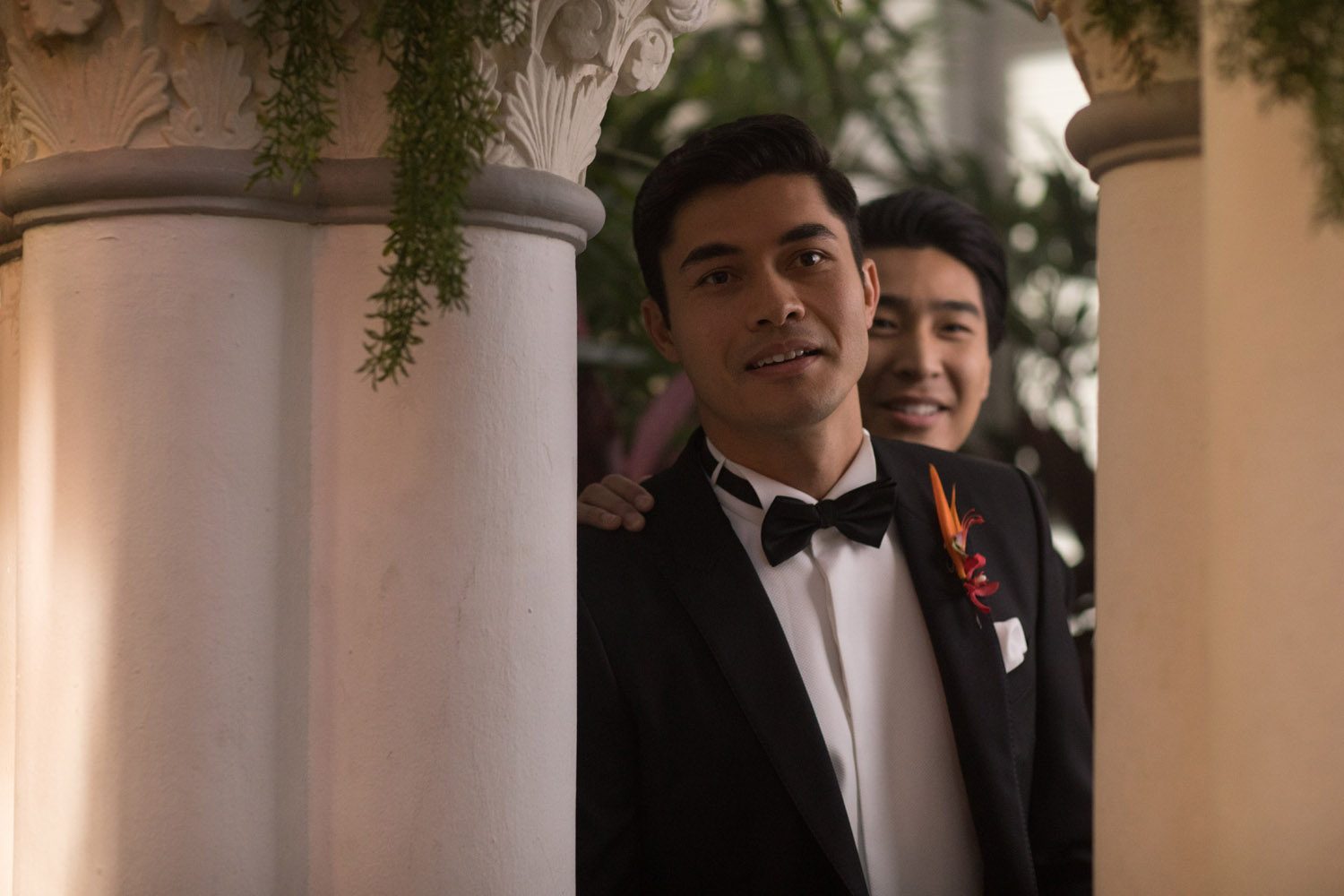 Nick Young’s suits and tuxes mostly came from Dolce & Gabbana, save for several linen suits and shirts that were custom-made in Singapore and Kuala Lumpur. Henry Holding, who plays Nick, said the clothes helped him get into character faster. “Every time I put it on, it was like a suit of armor and made me feel like I’d stepped right into his life.”

Non-spoiler spoiler: Watch out for his all-white ensemble during the dinner at Ah Ma’s. Eleanor Young’s outfits were inspired by Michelle Yeoh herself. “She has a dancer’s grace and movement, so I wanted her to look casual and unrestricted, which is how Kevin describes Eleanor in the book,” said Mary Vogt. During the Tan Hua party, Eleanor wears a burgundy Valentino dress with a large brooch. She then wears a pale blue, silk and satin and gold metallic hand-embroidered tulle dress and coat by Elie Saab, with a yellow and white diamond Michelle Ong brooch as a belt buckle.

“It’s a strong look but Michelle pulls it off,” said Mary.

Astrid Leong, Singapore’s elusive it-girl and cousin to Nick Young, is the epitome of understated cool. For the first scene in the movie, Astrid wears a sleeveless Christian Dior dress with a half-circle skirt falling just below the knee, accessorized with oversize Jackie O sunglasses. The style peg? No less than Audrey Hepburn, who Gemma Chan, the actress who plays Astrid, is a fan of.

“She likes things for what they are. It might cost a few million or be something she finds in a flea market and she’ll mix different styles. It was great fun working with Mary to put together Astrid’s looks,” said Mary Vogt.

Peik Lin, Rachel’s college friend, is another fashion show-stopper. “Her clothes are fun. We had outrageous five-inch heels for her which Awkwafina wore with aplomb. She can put anything on; she’s an actor whose personality is so strong you look at her first and then notice the clothes,” said Mary.

She wears Stella McCartney pajamas during the daytime and has – as all Crazy Rich Asians do – a walk-in closet full of designer dresses just in case.

Araminta Lee, whose wedding is Singapore’s biggest event in recent years, was one of Mary Vogt’s biggest challenges – after all, what should *the* society bride wear on her special day? What made things even more complicated was that the gown needed to be waterproof – Sonoya Mizuno had to walk down an aisle that turns into a stream.

The final gown had a fitted bodice with a huge skirt, flowing tiers, and a long train. “It weighed a ton. It must be one of the only waterproof wedding dresses ever made! Sonoya is a dancer and an athlete, so she’s strong, and she carried that dress like it was air,” said Mary Vogt.

Crazy Rich Asians premieres on August 22 in the Philippines. – Rappler.com