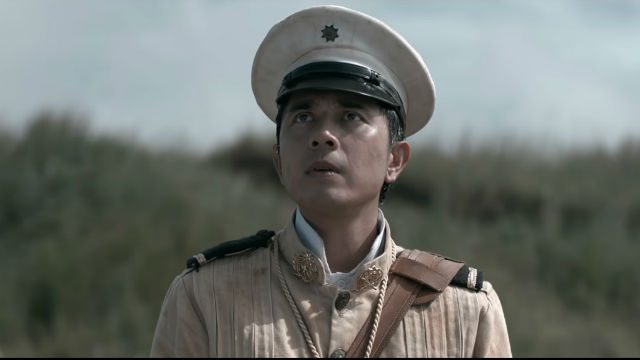 Heneral Luna’s most iconic image, the appropriation of the indelible tableau in Juan Luna’s “Spoliarium,” is undoubtedly a signal by Jerrold Tarog of his intention to subvert the usual intent of the historical drama genre to question the concept of nationalism instead of kowtowing to it.

Revolutionary Graciano Lopez-Jaena spoke of “Spolarium,” saying that “behind the painted figures… there floats the living image of the Filipino people sighing its misfortunes.” The painting has then been read as representative of the country’s plight under Spain’s blatant oppression.

By repurposing the distinct drama of the politically-loaded painting to depict the tragedy of the general’s murder by his countrymen, Tarog shifts the attention of the historical drama, which for decades has painted the country as unified against its colonizer, towards the glaring conflicts that plague and continue to plague the nation.

In a way, Tarog’s epic doesn’t feel so much an artifact like many of its ilk because it speaks of struggles that are as pertinent today as they were when the characters it depicts are still alive. (Rappler Talk Entertainment: History and the big screen)

Having already laid down his intent with Heneral Luna to make use of history as a gateway for the nation to be conscious of its still prescient sins, he redirects his subversive efforts toward a national hero whose claim to fame rests comfortably on his youth and his martyrdom.

The film opens with the words of Apolinario Mabini (Epy Quizon), contemplating on how the redemption of Emilio Aguinaldo (Mon Confiado) rests on death in battle. Mabini’s wise words resound throughout the film as it patiently documents the strange career of Gregorio del Pilar (Paulo Avelino), who rose to become one of Aguinaldo’s top generals by a mixture of dumb luck, youthful brashness, unmitigated loyalty, and the nepotism that characterized Aguinaldo’s regime.

The film, right from the start, puts into question the very value of martyrdom, not as a banner for nationalism but as a redemptive act for a disgraced person of note. (Rappler Talk Entertainment: Paulo Avelino and Epy Quizon on ‘Goyo’)

The film largely centers on Del Pilar’s private life and how during the months of uneasy peace, he spent his time relishing his quick promotion by flirting with Aguinaldo’s daughter (Empress Schuck) while wooing a town beauty (Gwen Zamora) and rollicking with his pals, all of whom are also decorated military officials.

As Del Pilar’s martyrdom has been constantly lionized by textbooks, teachers and movies, the most prominent of which is Carlo J. Caparas’ unimaginative Tirad Pass: The Last Stand of Gen. Gregorio del Pilar (1996), Tarog’s relentless depiction of the hero as a womanizing, self-doubting, and reckless leader of the revolution is humanizing in the sense that it paints the historical figure less as a revered icon and more a privileged youth wrestling with both his inherent imperfections and the responsibility that suddenly landed on his lap. Goyo: Ang Batang Heneral cleverly avoids flattery, stripping the young general of all the myths that decades of misinformed idolatry have afforded him. Instead, he is presented as a passive creature, gullible to the adoration of both his comrades and fawning fans.

Avelino suitably portrays the young general to complement this surprising imagining of the venerated figure as a muted and almost inert character. Compared to John Arcilla’s impassioned impression of Antonio Luna, Avelino is ironically docile and domesticated, with the full and satisfying effect of his austere depiction of the hero being revealed in the climactic battle where his glorified martyrdom is subversively reduced to a surprising non-event that can even be regarded as the gory punchline to a joke that an entire nation has taken too seriously for generations. Goyo: Ang Batang Heneral, for all its costly endeavors to be a picturesque and accurate recount of historical events, is in fact an astute comedy, with both its pleasures and discourse hinging on its grasp of all the ironic scenarios that hounded the revolution.

From its start, where revolutionary soldiers mistake a bearded General Alejandro (Alvin Anson) for General Luna, to its end, where the grieving love of Del Pilar dolefully walk out of the screen while Glaiza de Castro sings her rendition of rendition of Ernani Cuenco and Roberto Nicolas Rigor’s Bato sa Buhangin,” the film appears to be bent on carving potent humor out of the foolishness of a nation’s infatuation with personalities.

Even the climactic battle of Tirad Pass is played not as a stage for that rare instance of Filipino valor in Tarog’s interpretation of history, but as a missed opportunity – a window for redemption for Del Pilar that unfortunately shaped up to be a squabble that is brimming with humorous mishaps rather than a grandiose showcase of military genius.

This is a film that is flushing with subtle sarcasm.

It entertainingly ejects specific nuggets of history from the confines of typical deference, subverting them and converting them into bittersweet accounts of a nation that right from the start has begun to drug itself with etching whatever glory out of the hollow achievements of hollow heroes.

Tarog and co-writer Rody Vera’s screenplay is sublime. While it concentrates on the disrobing Del Pilar of his legendary status by making him the two-timing leading man of a lopsided romance and the irresponsible leader of the gang of a loafing youth comedy, it also takes time to shape the treacherous world that the young general conveniently neglects in favor of his youthful interests.

It never neglects to depict the fractured republic under Aguinaldo’s leadership, with Del Pilar’s narrative thread only serving as the most obvious evidence of the unfortunate political culture that has been inculcated right from the start. Despite its numerous characters with their respective threads, the film still feels unified in theme and texture. This is a truly testament to Tarog’s unfettered vision. The film is risky in the sense that its central figure is true to its theme – a pillar of salt, a castle made from sand. It is fueled not by attractive expletives or spectacles but a consistent intent to subvert, to shatter myths, idols, and martyrs.

It uses humor and all other available tropes to dismantle a national addiction to pat itself in the back with its wide array of symbols and icons, all of whom are as problematic as the present leaders we criticize today.

Tarog is not just an ingenious director. He is also meticulous. While the film convinces in its effort to turn history as a point of self-criticism and conversation rather than a source for shallow pride, it also shines as a scrupulously crafted film, with its visual and aural design seamlessly complementing its lofty discursive ambitions. – Rappler.com