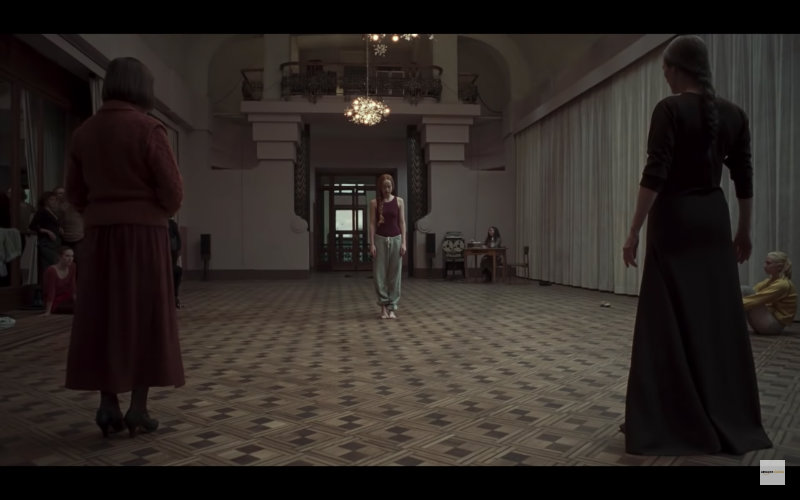 Perhaps one of the most indelible elements of Dario Argento’s Suspiria is Goblin’s effectively grotesque score.

Its mix of disconcerting percussions and a simple melody composed of a few notes repeating over and over again is the first thing that welcomes its audience to its blistering madness.

Then there’s the glaring pinks, greens and blues, then Jessica Harper’s Susie Bannion with her determined large eyes marching out of the airport only to be greeted by Berlin’s bizarrely powerful breeze. Suspiria never stops punching forward with sights and sounds that captivate as much as they repulse.

Luca Guadagnino’s Suspiria, less a remake of Argento’s film and more its more elegant but subtly more vicious younger sister, is less upfront in its viciousness.

It opens without the fanfare typical of Argento, without the musical warning that gothic horrors are yet to come. Instead, it opens with Susie Bannion, now played by Dakota Johnson, in a Berlin subway. The otherworldly score is replaced by a sound design that is terrifyingly precise in accentuating the noises that while ordinary in the setting, is unsettling amidst the sensual blend of curiosity and caution that is apparent in Susie’s face.

Guadagnino takes his time. He places the pieces of his puzzle with thrilling cruelty, knowing fully well that each character and each new information he throws into his film confuses as much as it captivates. He briefly moves away from Susie and introduces a terrified dancer (Chloe Grace Moretz) hurrying to meet with her psychologist (Tilda Swinton, underneath thick layers of make-up).

The psychologist, a peculiarly soft-spoken man, listens to his client ramble about her dancing school and witches. Guadagnino’s camera is constantly curious, loitering about, peering into items in the office, almost as paranoid as the characters.

Guadagnino makes his audience wait, knowing that real suspense is not about unexpected bursts of violence but about the mind piecing together the clues only to unravel an evil that is not just fictional but is also grounded on very real issues. His Suspiria isn’t a horror that irks just the sense. It also punctures the mind.

Argento’s Suspiria feels like it is set in another world. With its sharp colors, it is almost like a dark and distressing fairy tale where young woman discover that witches exist.

Guadagnino takes the fairy tale into the real world, blurring the lines between women and witches, unraveling a terror that doesn’t rely on myths but on how those myths are shaped by a history of both invisibility and voicelessness. His Suspiria is angry. It is also irresistibly beautiful. Unlike Argento, Guardagnino doesn’t hide his witches. He reveals them right from the start, right from when the wayward dancer confessed to her doctor. It is almost as if he doesn’t want to source his film’s horror from labels established by folklore or literature, but on valid emotions, such as love, betrayal, trust and rage.

The film gets violent, but not in the way that feels perfunctory.

The violence is always part and parcel of grace, art, and motion, which are elements of dance. It all makes sense because emotions are best conveyed in fluid movement.

In one scene, Susie tells Madame Blanc (also Swinton), the head of the dance school, that “the resistance is more emphatic,” defending her decision to stay on the floor instead of jumping straight away as choreographed. Blanc defends her choreography, telling her how she doesn’t know what happened forty years ago when the dance was created.

Clearly, the film makes art the core not just of its horror but of its very existence.

“This isn’t vanity. This is art,” shouts a decomposing witch in the film’s climax.

The scene is perhaps the most outrageous, most brutal, and most otherworldly in a film that in turns jumps from very real history to supernatural. Guadagnino makes his statement. Art, whether out of vanity or humility, is indeed terrifying. It breaks bones. It kills. — Rappler.com