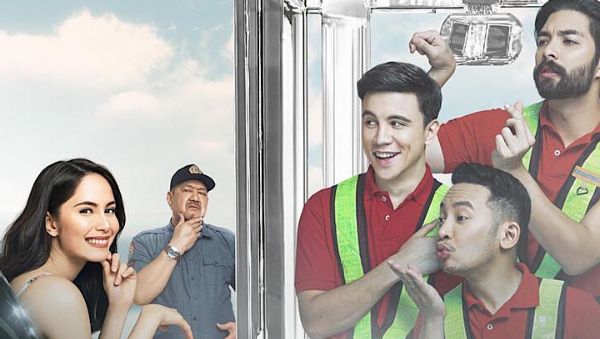 It is a blissful work that is just so earnest in its desire to give its audience a grand time in the theaters that it is so easy to dismiss it as just funny fluff.

Don’t make that mistake because there is much more to Tol than just the appearance of a well-made gag reel.

Writer-director Livelo and his writing partner Joel Ferrer have carved careers based on a collective obsession of men to never grow old, desperately clutching at every opportunity to remain in the past.

In 2013, the duo teamed up to write Hello, World, directed by Ferrer, about the awkward coming-of-age of a teenager who is about to take his first step towards adulthood.

Livelo made his directorial debut Blue Bustamante, the screenplay also written by the tandem, that same year. In the film a dad is forced to take pride in temporarily abandoning the seriousness of adult life for a lucrative role as one of the masked heroes in a Japanese TV show.

Ferrer then wrote and directed Baka, Siguro, Yata (2015), where a man who adamantly refuses to be a responsible adult is thrust into a situation where he needs to be mature. Livelo also directed Unli Life (2017), whose very clever conceit hinges on the idea of having multiple bids at changing one’s fate because of a concept lifted out of videogames.

Through years of pushing feature-length comedies and web-based sketches that tell hilarious parables of men coming to terms with their varying inescapable adulthood, Livelo and Ferrer have established a brand of comedy that endearingly reveals what are essentially embarrassing truths about the Filipino male psyche.

Their methods are often haphazard, with most of their films struggling to merge their desire to create a sensible aesthetic with the buffoonery they project. So far, Tol seems to be the pinnacle of their efforts.

Amidst all of its intentional ridiculousness, Tol is surprisingly a clean-looking caper.

The film tells the story of 3 friends (toll booth attendants Arjo Atayde, Joross Gamboa, and Ketchup Eusebio) who are trying their very best to outwit each other in their efforts to woo their childhood crush (Jessy Mendiola). Funnily framed as a series of anecdotes told while the trio is being interrogated by an unamused cop (Jimmy Santos), Tol faithfully fulfills Livelo and Ferrer’s penchant for depicting men who are content in being trapped in the past while comically suffering the absurd consequences of their immaturity.

Unabashed silliness is delightfully abundant. The film is relentless in its outrageousness. It knows that the quality of its comedy hinges on its ability to portray charming idiocy within human reason.

Tol isn’t merely a collection of characters performing skits and stunts in a slapdash effort to earn laughs no matter what. There is actually either a motive or an emotional basis that grounds all the nonsense.

In the end, the film just doesn’t give its audience all the chuckles they deserve. It also shines a light to why the spectacle of a bearded man, a mama’s boy, and a dude who has fallen out of his ambition, acting like toddlers, can also be affecting and dare I say, relatable.

It is a comedy where almost everything works. The performances of Atayde, Gamboa, and Eusebio are close to perfect in terms of jiving with the effort of Livelo to depict childish men. The story is simple, devoid of any unnecessary clutter that could have otherwise crowded the comedy. The jokes are definitely at the center of the film.