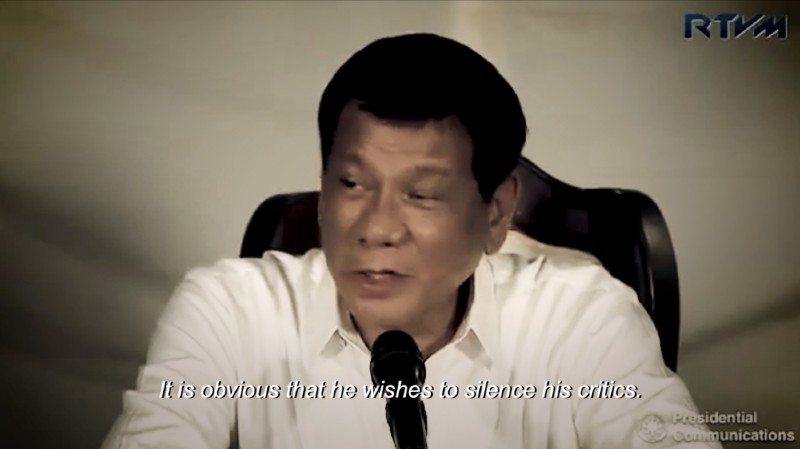 MANILA, Philippines – Director Mike de Leon is not a man who minces his words. And in a new short released online, he certainly holds nothing back in his critique on the Duterte administration.

The 5-minute short was uploaded on Vimeo early Sunday morning, February 24 – a day before the country celebrates a revolution that toppled a dictator.

“Rodrigo Roa Duterte A Portrait of the Dictator as Filipino (with apologies to Nick Joaquin),” reads the video description – a reference to the Nick Joaquin play.

The movie then shows different cuts of President Rodrigo Duterte, the former Davao City mayor who was elected president in 2016, cursing and hurling expletives during public speeches.

(His supporters enjoy his obscenity and vulgarity. He believes that these traits endeared him to the masses)

It then shows clips for Duterte’s police-led campaign against illegal drugs – an endeavor Duterte and his allies call the “war on drugs.” The controversial but popular drug campaign has claimed the lives of tens of thousands.

Critics – and independent investigations by journalists and nongovernmental organizations – have linked killings of alleged drug personalities to the Philippine police force.

Kangkungan goes on to critique a handful of Duterte’s policies – both the official and unofficial.

But it is his close ties to one infamous family that Kangkungan derides the most.

“At nagawa niya ang ‘di mapapatawad na krimen laban sa bansang natuto na atang lumimot… ang suportahan ang pagbabalik sa kapangyarihan ng walang konsyensyang pamilya Marcos (And he has committed the most heinous crime of all… against a nation that has forgotten its past… By supporting the return to power of the sociopathic Marcos family),” narrates the film, as it shows current and archival clips of the Marcos family.

Duterte is a close ally of the Marcos family, the heirs of the late dictator Ferdinand Marcos. His eldest daughter, Imee, is among Duterte’s handpicked senatorial candidates for 2019.

It then calls on voters – the youth, especially – to vote “as if your future and life depended on it.”

De Leon is best known for films that tackle both social and political issues. His latest film, Citizen Jake, was screened publicly for the last time on Saturday, February 23 – two days ahead of the People Power anniversary. – Rappler.com