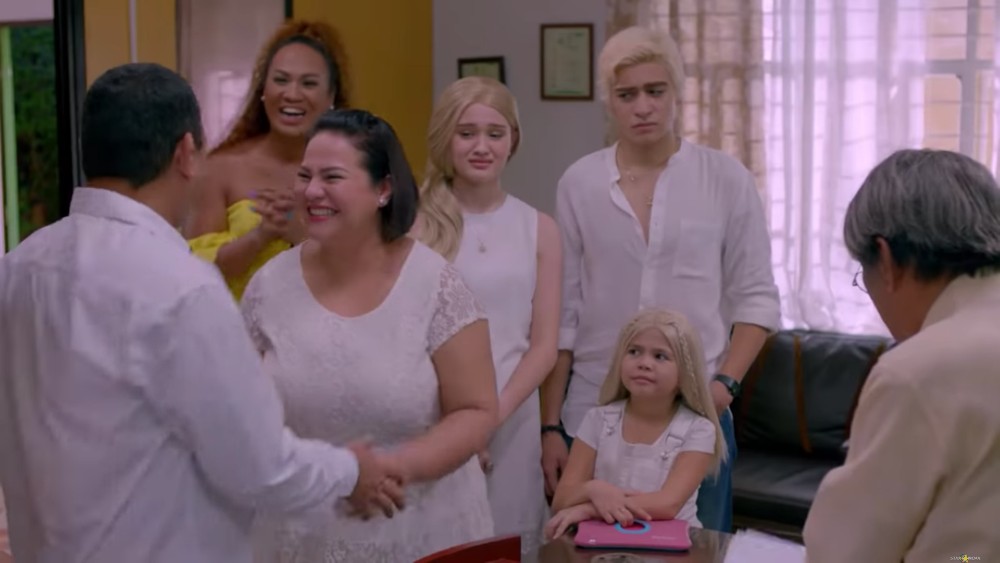 The wigs are fake. The accents are put-on. The conflicts and sentiments are borrowed. The climax that puts all concerns to a convenient close is lazy, and the predictably happy resolution is bluntly underwhelming.

It isn’t the managed expectation of being a meager pastime that makes Sineneng’s latest diversion such a louse since there have been countless broad comedies from Wenn Deramas’ Tanging Ina (2003) to Joyce Bernal’s Kimmy Dora: Kambal sa Kiyeme (2009) that remained committed to their crass and corny core without surrendering to creative complacency.

There is actually promise in its premise of a widow and mother of half-American and blonde-haired children falling in love with a widower of almost exactly the same circumstances. On its surface, the peculiar situation already encompasses discourses involving post-colonial experiences, skewed concepts of beauty and appearances and the gaps in cultural experiences that affect familial interactions.

In fairness to Sineneng, his film manages to squeeze in whatever it can from the vast buffet of possible themes within its mostly nonsensical plot. Sadly, the film is just a garish mishmash of jokes, gags and crowd-pleasing morals borne out of a commercial need to ground itself in supposed Filipino values. Familia Blondina skirts and tiptoes its way out of tackling more serious issues by landing in an area of familiar but repetitive and bland comfort of the family-oriented comedy.

There are just no surprises here. Amidst all the troubles and dilemmas Sineneng sets up for the film’s characters, everything is fixed by a dose of reliable familial love, no matter how incredulous within in the context of all the backstabbing, secrecy and connivances.

Now, this focus on ideals and principles is made questionable by the kind of humor that the film espouses.

The comedy is very desperately lowbrow, bereft of any real wit or inventiveness. The jokes are predominantly mean, relying on insults based on looks, race, and differences. Some of the gags don’t land at all, and it also doesn’t help that Familia Blondina is anchored by the glaringly dull performance of Karla Estrada, playing the confused matriarch who is forced to bring her Westernized children back to the Philippines to escape her dead husband’s debts.

Thankfully, the performances by the supporting cast are more colorful.

Jobert Austria is reliable when it comes to pushing punchlines. The otherwise derivative joke of a doting father punishing his children is given an unlikely freshness by his very earnest delivery. Rubi Rubi and Awra Briguela also give the otherwise banal film specks of actual charm and charisma.

What’s telling of Familia Blondina’s abject weakness is this reliance on extraneous factors to drive its entertainment value. Instead of concentrating on pushing the film to work on its own, it packs itself with cameos and ludicrous skits.

Family Blondina is fake and half-baked.

It is all over the place and doesn’t really become anything more than a silly diversion. – Rappler.com