‘Us’ review: This is America 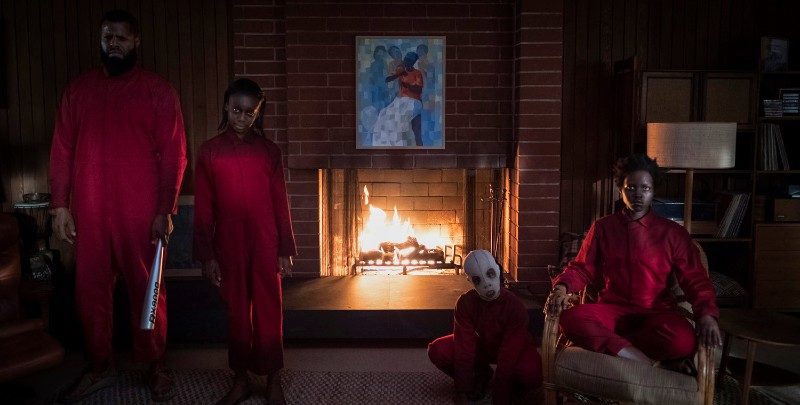 With unblinking soulless eyes and a voice that’s been rendered coarse seemingly by decades of abuse, a woman in a red frock answers. She’s an identity thief and invader, a woman who is unguided by moral rules and social norms in her use of threats, intimidation and violence to get what she wants and what she needs. The most disturbing thing is that the clearest and most certain thing she has ever spoken is the she and her family of freaks and psychos are Americans.

Get Out, Jordan Peele’s debut feature, brought into mainstream consciousness the idea of horror hinging on very current anxieties of a specific demographic.

In telling its tale of an African-American uncovering a ruse perpetuated by a privileged race to live their dreams of both superiority and immortality, the film exposed a perturbing and potent perspective of the troubled racial relations in America. The film fed on oddity and discomfort, wedging the peculiarity of the suspicious congeniality of a white couple in welcoming the African-American boyfriend of their daughter alongside stranger occurrences. It succeeds in carving overwhelming unease out of a conglomeration of cleverly-knotted curiosities, all of which are grounded on very real and very contemporary moods and tensions.

In Us, Peele sets his eyes beyond racial strain without completely abandoning it.

His main protagonist now is Adelaide (Lupita Nyong’o), an African-American woman who has survived the trauma of not just getting lost in a horror house as a child but of bumping into her doppelganger. A wife to a doting man-child (Winston Duke) and mother to a teenage daughter (Shahadi Wright Nelson) who wants to give up being a track and field athlete and a socially awkward son (Evan Alex), she goes back to Santa Cruz, California for vacation with her family, not expecting that her return will set into motion events involving more than just the doppelganger from her childhood.

Us has Peele expanding his canvass, turning the latent divisions that give rise to oppression into the cornerstones that ground his horror of stark distortions.

Us is hardly as sleekly plotted as Get Out. It is, however, a more ferocious film, a work where terror and fury are front and center of a complex puzzle whose too smooth an unraveling seems to be its weakest link.

This is the America of Peele’s fertile mind.

It is a land of institutional distrust, where the fact that miles and miles of unused tunnels exist beneath cities give rise to theories. It is a country addicted to imagery, no matter how far those images are from reality. Its suburbia is riddled with covetous families far too attached to their material belongings, turning them into barometers of worth. It is a nation whose citizens have become too comfortable with their trivial needs and wants that they have become complicit to a gross culture of injustice and division.

Us ingeniously exaggerates and carves a gripping and nightmarish parable out of the alarming vices that have sprung from America’s treasured virtues. It fashions a dark parable borne out of conspiracy theories.

It jumps from being a tense and taut home invasion thriller into a gratifyingly unpredictable deep dive into a distinctly American doomsday scenario, fueling its dread with a broken country’s profound anxieties. What is even more fascinating about Us is that while it tackles a glaring wrong – using sounds and images that incite and provoke, it remains an engaging and exemplary genre picture. It never abandons the need to entertain despite its endeavor to present an America that is not so pristine and beautiful.

She is a spectacle, transforming seamlessly from confused and protective mother to a seething and vengeful force of nature. She gifts the tarnished characters she plays with rich emotionality, never allowing them to fall into the trap of being stereotypes. Us, even absent all the appreciation for its very many layers, is worth the price of admission just because of Nyong’o.

Peele’s meticulous direction however is what really makes Us stand out.

The details in the film are astounding, and even if the film treads unexpected courses towards its unsettling conclusion, it never relinquishes its sense of humor or its grasp of incisive parodying. Us is vast in its ambition and vigorous in its presentation. It proves that Peele is an original voice, an uncompromising creator of nightmares based on everything that has turned wrong in America. – Rappler.com