‘Between Maybes’ review: Romance in Saga 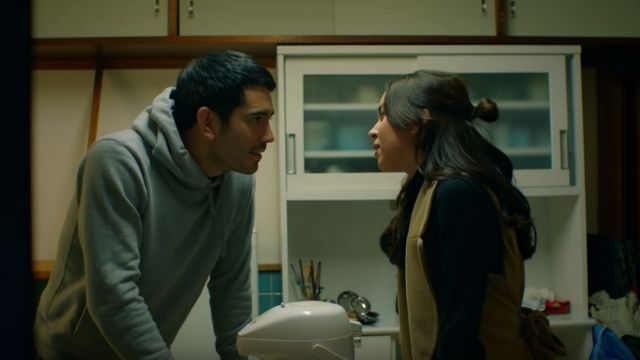 After a heated exchange of hurtful words with her mother (Yayo Aguila), Hazel (Julia Barretto), a former child star who is teetering towards turning into a has-been, suddenly decides to pack her things and take the next flight out of Manila. She finds herself in the middle of Saga, a quiet town in Japan, where she serendipitously meets Louie (Gerald Anderson), a waiter at a local seafood restaurant who becomes her erstwhile tour guide and potential romance during her abrupt sabbatical.

Escape as an underlying theme

Escape is an underlying theme of Jason Paul Laxamana’s carefully plotted Between Maybes. Within the construct and common pleasures of the commonplace rom-com, the film builds very familiar fantasies, only to twist them and put upon the pedestal the supremacy of real life.

The romance of Hazel and Louie isn’t exactly unique. Their chance meeting actually feels like a lazily written set piece, where the burnt-out actress suddenly finds herself in a roadside restaurant in the outskirts of a rarely visited Japanese city just so she can charm a brooding Filipino expatriate with repressed issues.

The film then diligently goes through the motions of the formula, allowing the two would-be lovers to get to know each other through a mix of profound conversations and cutesy interactions. In fact, it can be argued that more than conjuring just another romance for an audience, Laxamana sets up a fantasy for his characters, one that would have them pit escape with real life. (WATCH: Rappler Talk Entertainment: Julia Barretto on ‘Between Maybes’)

It is at this point, where Hazel and Louie giddily enter a romantic relationship against reason and logic, that the film brilliantly separates itself from its ilk.

Between Maybes takes its characters far away from their problems and their imperfect personalities into a bubble where everything is right. With Louie, Hazel is away from her fans, unjudged and loved despite her quirks and complications. With Hazel, Louie finally has a companion after being abandoned in a land where he is still a stranger despite having imbibed its culture.

Sure, there are complications. Hazel is a celebrity who is not used to the simple life Louie can offer. However, the gravity of the complications and the impossibility of their pairing only makes the escape Laxamana concocts so much more desirable.

As the film makes its way towards its conclusion, it becomes apparent that while escape is sweet, it has to give way to life, including all its warts and creases.

What makes Between Maybes work amidst its carefully veiled pragmatism towards love and happy endings is its ability to portray flawed characters and flawed situations without judgment.

Laxamana has a knack for conjuring the most unsavory of characters, forcing them into positions that urge his audience to be able to relate to them and their difficult personalities. He has turned sinners and undesirables – from a plus size woman whose expectations with her own romance are in discord to how she wants society to treat her, to a stalker who takes advantage of a glitch to spy on a girl who also happens to be a fence – into acceptable romantic leads without ever hiding their grime and taint.

Without making so much of a spectacle, Laxamana actually subverts the genre, riding overused formula to allow morally grey characters their chance at elusive happily-ever-afters.

Between Maybes is perhaps the most successful of Laxamana’s subversions.

It inexplicably exposes Hazel as the epitome of the despicable celebrity, one who has been so removed from reality that all her actions scream abuse and shallowness. However, instead of conveniently treating Hazel as a cartoon, Laxamana builds a universe, no matter how stereotypical because of its simplistic depiction of her less-than-perfect family and a condensed showbiz industry, that allows her a stab at redemption.

It also helps that Barretto plays the character with astounding maturity, switching from being aptly comical to generously affecting quite seamlessly. It allows for the ending to feel earned, joyous and glorious even if it behooves expectations.

Between Maybes is just a clever film.

It is immaculately shot, with each frame bleeding with so much thought and faint emotion. It is more sophisticated than it feels and while it allows itself to be goofy and skirt away from a mostly consistent mood and tone, it never really abandons the exquisite elegance it aspires for right from the start. – Rappler.com