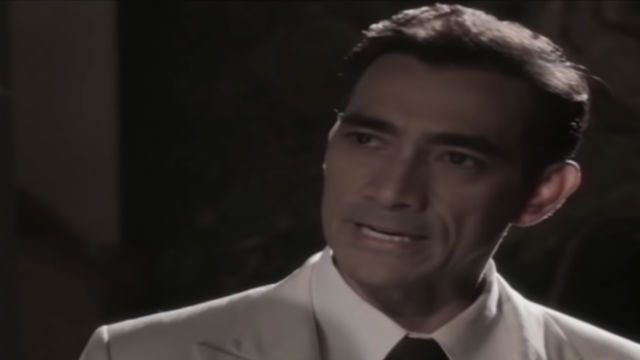 Dwight Eisenhower, who is portrayed in Matthew E. Rosen’s Quezon’s Game by a seemingly too young but effective David Bianco, described the Filipino as a “sentimental and nationalistic people.”

Quezon’s Game makes most of that sentimentalism and nationalism and ends up carving an indelible affect out of a sometimes wobbly but coherent conjuration of melodrama from history.

What is clear is that Quezon’s Game amply cushions its indulgent mawkishness on the grand performance of Raymond Bagatsing. He could have gone the easy route of shallowly impersonating the beloved president but instead, decided to infuse the historic character with the fragile soul of a man on a mission but with very little time to do it.

There is this one scene that could have gone horribly wrong in the hands of a lesser actor. Quezon is busy in his office when an assistant brings him the frustrating news that all of his efforts in bringing in more Jewish refugees are for naught. He waits for the assistant to leave the office, then he elegantly stands up and calmly walks towards the door to close it, and waits for a few moments. The president then lets out a controlled but evidently exasperated burst of emotion, violently clearing his desk of everything, before deflating into the sick and tired executive that he is.

The scene is something out of a soap opera but Bagatsing steers his character towards dignified emotionalism instead of unfettered histrionics.

It isn’t just that Bagatsing did very well in that scene. It also helped that his portrayal of Quezon is not one that imagines the character as the hero that he is now. He plays him with an understanding that he is human who might be exemplary but is still liable for faults in personality and lapses in logic.

Bagatsing makes Quezon’s predicament less like a matter of trivia that is meant for historical books that only those with a precise interest in history will want to know and more like a relatable dilemma, a personal goal and triumph. Limited by an obvious lack of resources, Quezon’s Game imagines pre-World War 2 Manila as a nearly empty and paradisiacal tropical resort town with ladies and gentlemen treading manicured garden roads with nary a worry.

Everything looks too pretty, pleasant and luxurious to the point of incredulity. Rosen is clearly just making most of what he has, restricting his film within the only available location that can approximate the period without giving way to obvious anachronisms. Thankfully, Quezon’s Game is not a film that requires its scenes to happen outdoors. Most of the film has its characters discussing and debating within closed quarters.

In fact, the film’s tension comes from the complicated politics that renders him almost powerless to do what is right. Rosen ingeniously focuses on the issues that strike directly on matters involving sovereignty, turning the humanitarian crisis that Quezon faces into something that is utterly relevant even up to now.

Sure, Quezon’s Game puts the president on a pedestal but it makes sure that such place in a pedestal is earned, at least within the film’s logic.

Rosen doesn’t rely just on unreasonable respect for already revered historical figures. He paints Quezon not as a peerless hero but as a shrewd politician who is not afraid to muster his knowledge of his nation’s attachment to sovereignty and humanity to best the colonizers he still acknowledges as essential to his mission.

What is most fascinating is that Rosen makes all the backroom dealing quite exciting, even if he sacrifices complex writing for convenient stereotyping of some minor players. Ruled by a real statesman

Quezon’s Game is not a perfect film.

A lot of it is fluffed up versions of fact and history.

However, it is a film that is necessary now as it harkens to a time when we were a nation ruled by a real statesman with real morals and real respect for humanity and independence. — Rappler.com