‘Finding You’ review: Lost in the novelty All Easy Ferrer’s Finding You has to do is to properly navigate its apt and relevant premise to a reasonably charming end.

Sadly, the film is far too focused on explaining itself to the point of incredulity. Sure, it’s quite cute in the beginning but as it nears its landing point, it becomes too busy and complicated to make any real emotional impact.

Nel (Jerome Ponce) is on a mission to discover the girl he is referring to in the social media statuses from several years back.

Despite having a curious ability to remember details from years ago, there is that mysterious gap that renders him unable to recall that specific period in his life. He therefore recruits his best friend Kit (Jane Oineza) to help him out to search for that mysterious woman. The set-up allows for the film to explore the many loves of Nel, awkwardly shifting from present to past to present with very little effect on rendering the main character more lovable or at the very least, grounding his unhealthy curiosity for a forgotten past in logic.

By the end of the film, Nel is just a hopeless and selfish shmuck, perhaps even completely undeserving of a happy ending because of gaping lack of redemption in his stretched-out storyline. He is a character who has been woefully reduced by a flimsy conceit.

This isn’t to mean that Ferrer didn’t exert enough effort to make a truly memorable romance.

Finding You has all the cursory elements of an amiable love story. It is a pretty film, with young and good-looking actors and actresses portraying hopeless romantics who have all the unrealistic capabilities to throw away their careers for the sake of love.

The film looks and sounds right, it is just that it opts to be stuck with its initial novelty that it couldn’t possibly graduate to be really enthralling in any significant way. It’s just a sorely stunted work. 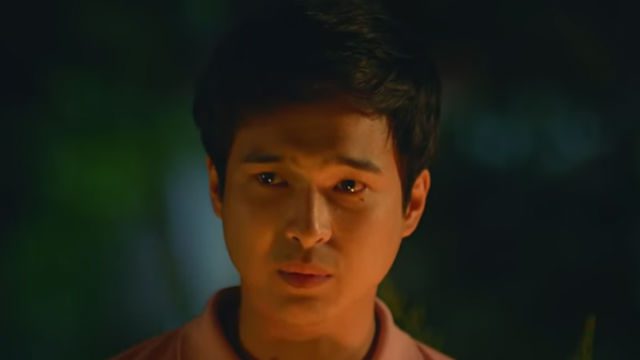 It is unfortunate because Finding You has promise beyond the easy and ready thrills of youthful romance.

First, there is a fervent attempt to define a specific generation. Nel is not just depicted as consumed by a need for love. He is also a lowly employee who would often be bullied by his boss. He is a self-conscious overachiever from high school who has found himself struggling to find success in the real world. He approximates the anxieties of the generation he represents. He also represents the generation’s nagging infatuation with the past and its capability to ensure that memories are preserved even if the owner of those memories can never remember them.

Truly, Finding You could have had a lot more repercussions.

Sadly, the film just keeps finding itself circling back towards its least interesting facet which is Nel’s inexplicable thirst for romance. Even its ending, which is more of a cop out to make it seem that the film subscribes to the notion that love stories should always end happily ever after, is hurried and unearned, seemingly conceived just to close the romance.

Finding You never finds its real footing because it is far too satisfied hopelessly navigating the tired labyrinth of love. Finding You is both harmless and forgettable. It has more than a handful lovely moments but it just fails to sustain its momentum as it lazily makes its way towards its climax composed of an unsatisfying twist and a string of gaudy reveals. — Rappler.com