There’s an outrageous action sequence in David Leitch’s Fast & Furious Presents: Hobbs & Shaw that lends itself as a metaphor for what the franchise has evolving into.

Shaw (Jason Statham) is driving a pick-up truck with Hobbs (Dwayne Johnson) in the back, trying to make sure the chain tethered to a helicopter driven by genetically engineered bad guy Brixton (Idris Elba) stays put.

To keep Hobbs and Shaw from being carried by the helicopter off a cliff, pick-up driven by Hobbs’ relatives are quickly fastened to Shaw’s truck in routine succession up – until all we see is a train of muscle cars driving around a Samoan cliff.

It’s a spectacle by virtue of sheer ridiculousness.

Also, it is also telling of the kind of entertainment all the films branded with the words fast and furious has. Just like the absurdity of adding one truck after another as the only way to keep the bad guy from escaping, the Fast & Furious franchise keeps on adding more and more similar-looking action films to its mantle – to the point of tedium.

Sure, Hobbs & Shaw isn’t about the ever-growing family of the Dominic Toretto but it follows the same formula with very little effort to differentiate itself from its bombastic cousins.

So Hobbs & Shaw is also all about blazing biceps, blundering banters and hyper-powered vehicles doing things that they aren’t meant to do.

It will certainly delight viewers who are eager for endless brunt and nothing more. It is loud and boorish, leaving almost no room for any meaningful dialogue since much of the talk is reserved for the titular characters to reestablish their love-hate rapport.

The film will, however, bore those who are waiting for the franchise to finally step out of its staggered stage of pubescent infatuation with stereotypical masculine wiles and finally be about something more. 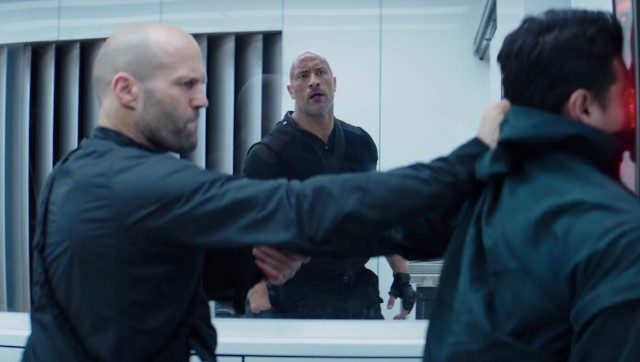 As funny as it is high-powered

Having gotten the obvious out of the way, Hobbs & Shaw is one of the more consistently gratifying entries in the franchise that’s seen itself riddled by a bunch of middling sequels.

Leitch is talented in adding verve to a standard fist fight and color to a run-of-the-mill car chase. An alleyway brawl between Hobbs and Shaw’s sly and slick sister Hattie (Vanessa Kirby) ends in a rather amusing Turkish get-up, allowing Johnson to make turn an underused exercise movement into not just an action scene finisher but also a subtle punchline. The aforementioned line of rugged trucks attached to a rampaging helicopter is not just an outrageous stunt, it is also a potent visual gag.

Hobbs & Shaw is as funny as it is high-powered. Johnson and Statham have palpable chemistry between them and while the countless jabber can get tiring, it still provides a breather to the string of chaos and explosion that fill up the long running time of the movie. Hobbs & Shaw will inevitably be forgotten once the next and more outrageous Fast & Furious entry comes along. Its wit and charms are temporary, and as light and generic as buttered popcorn. — Rappler.com