Zombieland (2009) isn’t exactly a movie that begs for a sequel.

Despite its faults and obsessions, Ruben Fleischer’s film about snarky survivors of the zombie apocalypse feels complete, like it had nothing more to say precisely because it really had nothing hefty to say. The film has mined the gimmick for everything it’s worth. It was fun. It was funny in parts. It is done, a dead film that is best remembered for the few moments that made it somewhat special.

Zombieland: Double Tap, which arrives 10 years after, feels more like a futile exercise in resuscitating a long-dead cadaver.

Fleischer commits to what made the original film somewhat unique. He reminds his audience that part of the reason nerdy Columbus (Jesse Eisenberg) survived the zombie plague is because he has several rules he religiously follows. Columbus does cardio, wears his seatbelt, and is wary of toilets. Columbus is also still with the friends he made in the past film like Tallahassee (Woody Harrelson), the rough-on-the-edges father figure of the group, Wichita (Emma Stone), Columbus’ love, and Little Rock (Abigail Breslin), who eventually leaves the group with a pacifist musician, forcing the group to leave the comforts of the White House to bring her back to safety.

Double Tap is obviously a double dip on the sauce that made Zombieland special.

The taste is so familiar, it has become rote and routine. The witty sarcasm that ten years ago made its rehashed zombie-infested America feel fresh has become redundant. It’s undeniable that Double Tap is still amusing, but now that the gimmick has lost its novelty, all the fun feels slight like punchlines you’ve heard a long time ago but can’t really remember. 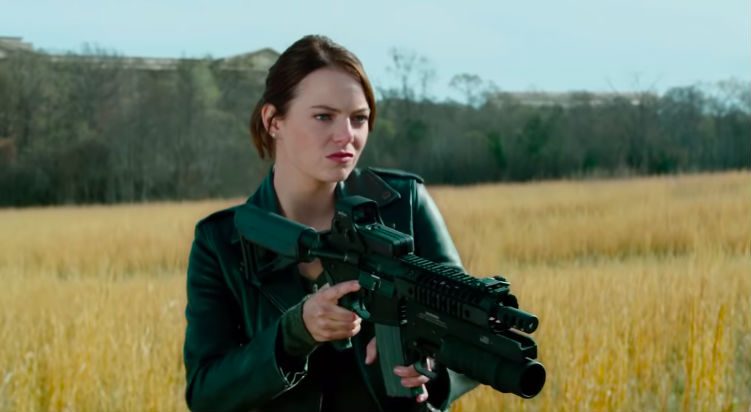 So what’s new in Double Tap?

There are new characters. There is a fashionista (Zoey Deutch) who has survived the zombie apocalypse by hiding in an ice cream chiller in mall. There is also a butt-kicking bartender (Rosario Dawson) who made an Elvis Presley museum her home. While the survival stories of these women seem to be better stories than what Double Tap pursues, Fleischer intends that the new characters enrich the quest for normalcy that has always been the thesis of Zombieland. In Columbus’ desire to evolve his relationship with Wichita, there needs to be a third party, a woman whose ditzy nature matches the absurdist vibe of the film. Tallahassee, on the other hand, needs a match.

It also touts a new kind of zombie, supposedly one that would have Columbus to reassess his rule of double tapping to ensure that the zombie is really dead.

Sadly, Double Tap’s more ferocious zombies are letdowns. By the end of the film, they never really provide the sequel with renewed tension and tenacity. While Zombieland never aspires to be a peddler of horror thrills because it imagines itself to be more of a comedy, a sense of danger for its beloved characters would have made the narrative less of a skit like the previous film and more of a realigning of the film towards its franchise ambitions.

Double Tap, while unnecessary, is a harmless and merry little sequel.

It doesn’t deserve another sequel. What more can be squeezed out of a zombie-infested wasteland populated by nerds, weepy man-children and pacifist hippies? — Rappler.com