There are thousands of horror films that have opened with desperate parents venturing into the unknown for the sake of their children. In the case of Sunod, the desperate parent is Olivia (Carmina Villaroel), a middle-aged single mother who is forced to take an entry-level job in a call center for the sake of her very ill daughter Annelle (Krystel Bimner). However, her new job turns out to be an opening to bigger problems when it’s revealed that the historic building where the call center is located has quite a few secrets.

Ledesma cleverly shrouds the mystery with the mundane.

He melds the realistic anguish of a cornered and concerned mother and the supernatural, resulting in a horror that has its feet firmly on the ground. Sunod supplements its elegant scares with workplace woes, obscuring the elaborately paced ghost story with banal but valid workplace fears such as intolerable graveyard shifts and predatory bosses. Ledesma’s portrayal of call center culture may be stylized to fit the otherworldly bleakness of his horror film, but it all makes sinister sense.

It may not be obvious but Sunod acknowledges social classes, making it apparent that Olivia’s real and supernatural struggles are all linked to the fact that she is economically underprivileged and that she is last in the pecking order of the world. Ledesma’s horror is one that is aware of capital and labor, of the sins of greed and the privileges of the wealthy. 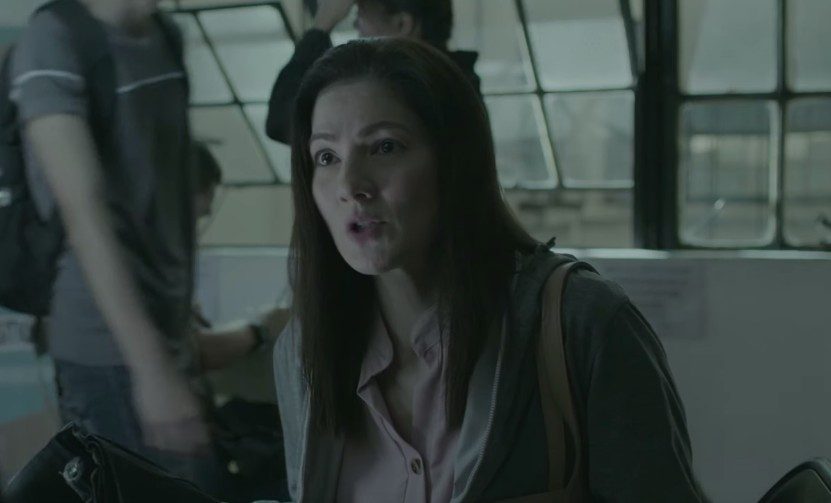 Gaps to be filled

The lore around the ghosts of Sunod is vague.

There are many gaps that could have been filled. While the film eventually succumbs to explaining its conceit, it never fully reveals the mythos that makes the entire thing work. Thankfully, the visuals make up for the lack of information. Mycko David firmly establishes a world of shadows where slivers of color aren’t signs of comfort but signals of danger. The production design is also noteworthy, especially since the effectivity of the scares relies on a certain air of malevolence in the decrepit building.

The film is also very well-acted. Villaroel is believable as a frantic woman whose folly and foolishness is due to her being a caring mother. Bimner is excellent as well, shifting from docile daughter to devil with admirable ease. The supports, from JC Santos to Susan Africa, add further color to the mystery. Sunod is a solid effort.

It is polished from start to finish. It is compelling and serves more than just cheap shocks and predictable scares. – Rappler.com