‘The Mall, the Merrier’ review: More of the same, but messier Once you’ve seen a Vice Ganda-led comedy, you most probably have seen it all.

While the settings change or the genre it spoofs shift, the elements remain the same. The comedies are all anchored on mean-spirited hilarity, all utilizing a broad moral lesson to make its abject crassness palatable to the families it caters to.

The Mall, the Merrier, directed by Barry Gonzales,is just more of the same – and messier.

If one really thinks about it, the conceit has all the makings of something brilliant.

The mall has always been used by filmmakers to represent the sins of capitalism. In George Romero’s Dawn of the Dead (1978), the blending of hordes of zombies haunting the halls of a mall eerily reflects the growing culture of numb commercialism that has been spreading in America. While malls have been used as settings for many Filipino films, The Mall, the Merrier is most possibly the closest that a Filipino film attempted to make something out of the culture created from the preponderance of malls in the Filipino psyche.

In fact, it felt like The Mall, the Merrier was traversing the route of mixing discourse with Vice Ganda’s trademark silliness.

The film opens showing how Tamol Mall has survived the winds of progress, with its shoe box-like structure remaining unchanged despite the skyscrapers sprouting around it. A musical number, most probably inspired by Greg Ternian and Conrad Vernon’s Sausage Party (2016), has Vice Ganda merrily singing and dancing around the mall, revealing in the span of a few minutes the humorous exaggerations of the rundown mall that becomes the setting of a sibling rivalry that gets mixed with the occult. 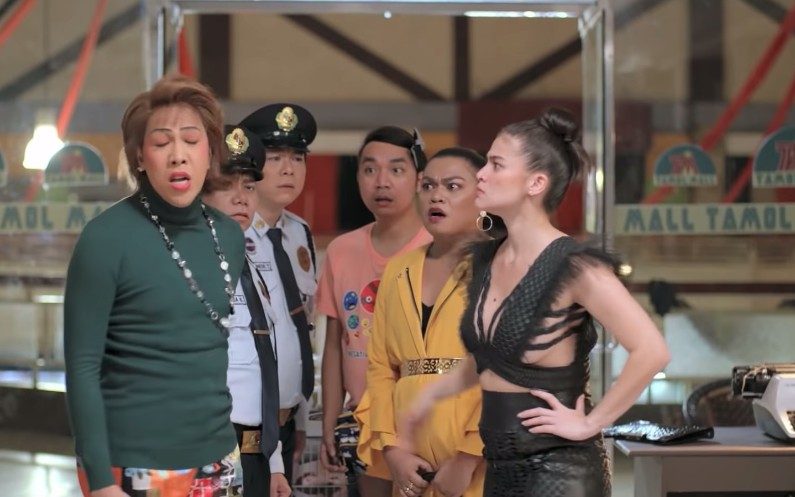 Going through the motions

Sadly, the promise ends with the musical number.

The Mall, the Merrier continues to become like any other Vice Ganda-starrer, with the comedienne performing self-deprecating stunts, insulting her co-performers on the basis of gender, attractiveness and weight, and going through the motions of forwarding a plot that just doesn’t make any sense. Whatever discourse that could have been derived from the fact that the comedy is set and is about a mall is thrown out the window.

The film is a rabid ruckus. It is a weightless hodgepodge whose only goal is to sell, sell and sell.

There is just nothing discreet about The Mall, the Merrier.

It is loud and proud, but not exactly in the same way the best films of Vice Ganda are. While there will always be a certain charm to the unabashed vulgarity of Vice Ganda’s comedies, this one just feels routine and repetitive. What is really bothersome, however, is how the film came so close to being about something rather than being the typical spiritless extravaganza that is only good for a few chuckles.

The film seems to be content on being shallow and absent any compelling agenda that is unique to Vice Ganda as a very successful and influential entertainer belonging to the LGBT community; it all feels like a waste of time.

It is inevitable that the filmwill delight its target audience, while alienating the rest who are still waiting for Vice Ganda to evolve her comedy.

The Mall, the Merrier is proof that innovation isn’t important to Vice Ganda. She’s just there to please her loyal constituents and make a few bucks in the process. – Rappler.com