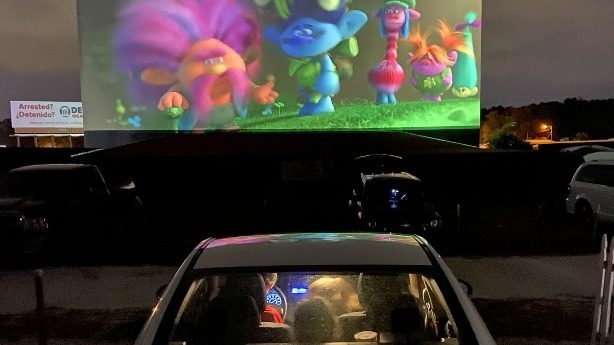 OCALA, USA – Since the United States closed its movie theaters in March to halt the spread of the coronavirus pandemic, a small drive-in cinema in Florida has enjoyed a revival that recalls life in the 1950s.

“The old cliche that ‘the show must go on’ is not a cliche. It’s a way of life to us,” said John Watzke, owner of the Ocala Drive-In in the Florida town of Ocala.

He said that his is one of only 11 still operating across the nation during the lockdowns.

The rusting sign surrounded by stars revives memories of the heyday of the drive-ins, when movie-goers would park their cars in front of a huge screen and order drinks and popcorn from servers who would come to their car window.

“We are a rarity right now,” said cashier Jeff Mellott.

“We’re helping people. Everybody is cooped up. So this is a chance for some people to get out.”

The viewers, many of them wearing face masks, park their cars on the open field to see the movies as night falls.

“Everybody stays their distance, the customers outside are all parked 12 or 14 feet apart,” said Watzke.

Of the 4 films being screened at the weekend, two had already debuted online in recent weeks, Trolls: World Tour and Resistance.

Since customers stay in their own cars during the show and thereby avoid gatherings of more than 10 people, Watzke’s business is permitted to remain open, offering a welcome outlet to people in the midst of the pandemic lockdown.

Hansel Sanchez drove almost two hours from Sanford, another city in Florida “just to break the monotony of sitting at home.”

“My daughter has never been to a drive-in. Neither has my wife. So it’s something cool to do,” he told AFP.

In a world of online streaming services and smart phones, drive-ins have all but disappeared.

The pandemic may trigger something of a comeback.

The United Drive-in Theatre Owners Association estimates that there are currently 305 businesses that qualify as drive-ins in the United States, where once there were thousands.

The Los Angeles Times reported that other drive-ins in California, Kansas, Oklahoma and Missouri have also seen a bump in ticket sales. – Rappler.com