What ‘Rurouni Kenshin’ actors think of their characters Facebook Twitter Copy URL
Copied
'It's like he's a close friend who lives inside of me,' says Takeru Satoh of his character, Kenshin Himura. What do the actors who play Kaoru, Aoshi, Shishio, Sojiro, and Saito think?

MANILA, Philippines – A feeling of closeness to the character of Kenshin. The pressure of playing Shishio. The madness of Sojiro Seta.

With just days leading up to the arrival of stars Takeru Satoh (who plays Kenshin), Emi Takei (Kaoru) and Munetaka Aoki (Sanosuke), as well as director Keishi Otomo in Manila for the Rurouni Kenshin: Kyoto Inferno premiere, the anticipation has reached fever pitch.

How does Takeru feel about playing Kenshin? How was the epic battle between Kenshin and Shishio designed? Here’s what they have to say:

1. Takeru Satoh on his role as Kenshin Himura For Takeru, who continues his role from 2012’s Rurouni Kenshin, this film was about exploring new sides to the iconic character with a distinctive X-shaped scar on his face.

“There are things this time that Kenshin must overcome to defeat his opponent, so Kenshin has to become a ‘new Kenshin.’ Every day brought another scene that was vital, and every scene was a highlight,” he says.

He also adds that he’s gotten quite attached to Kenshin: “I’ve never had this feeling about a character before. I have affection for every character I play, but this is the first time I’ve felt that I wanted to go on playing him forever.” Kaoru holds her own in the anime series, but in this movie, expect to see her fight on a different level! “Director Otomo asked me this time to play a Kaoru who has matured a little. And this time, Kaoru fights, too! Not with a wooden sword, but with a halberd,” she says.

3. Yusuke Iseya on growing into his role as Aoshi Shinomori The accomplished actor says that he’s proud to be part of a world-class team, and that working with Min Tanaka, who plays the tough-as-nails Okina (or ‘elder’) was very important to him.

“My motto is always ‘don’t get discouraged’, and when I was performing with Min Tanaka, the Elder who Aoshi fights with, I found myself face to face with the very personification of that motto.

In the film version, Aoshi is a former ninja who tragically loses his men years before, and is now out to get Kenshin.

4. Yosuke Eguchi on bringing out the nuances to Hajime Saito “Action, costumes, scale…everything’s been powered up this time to the point where there’s no comparison with the first movie any more,” he says.

Saito is a police officer in the new governement, and accompanies Kenshin on the epic battle to take down the evil Shishio.

5. Ryunosuke Kamiki on the madness of Sojiro Seta In the film, the eternally cheery Sojiro, Shishio’s right-hand man, relishes the chance to fight Kenshin for himself.

“In the fight scene with Kenshin, Takeru and I talked about the timing, and we practiced it again and again. I think I managed in the sword fighting to bring out what Sojiro is like deep inside,” says Ryunosuke Kamiki.

6. Tatsuya Fujiwara on the pressure of playing Makoto Shishio 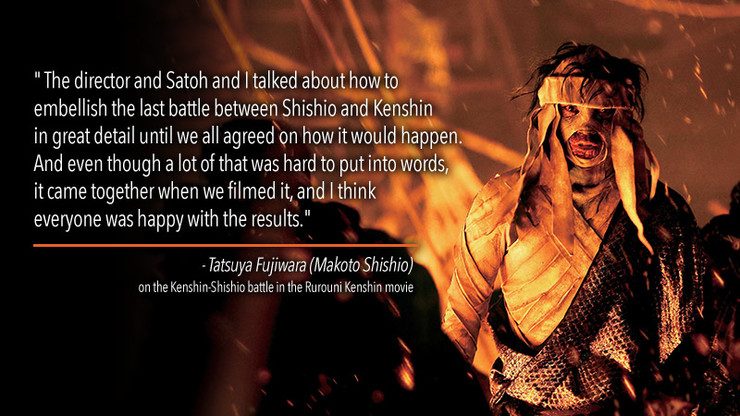 “This was the first time I’d worked with Director Otomo, and Shishio was a special kind of character so I had some worries, but both the director and Satoh were very welcoming,” says the actor of his complex, wicked character.

“Shishio is a character the staff built up with visuals and everything else over a long time. The action team also worked hard with me, so I felt really under pressure to respond to that.” We have seen the newest live-action film, and in ways, it sets the anime free to explore new heights. The polish, glow, and bright colors give way to a grittier, darker feel. Characters face the monsters outside – and within.

All this in the midst of a bustling 19th century Japan that’s seeing and adjusting to Western influences. A lady wears spectacles. There are old-fashioned gattling guns. Men in top hats and long coats walk side by side with women in vibrant, elaborate kimonos. (WATCH: Main trailer for ‘Rurouni Kenshin’ sequels released)

The Rurouni Kenshin animated series, based on the manga by Nobuhiro Watsuki, hit TV screens in 1996. The show and the manga enchanted fans young and old with the combination of  sophisticated action scenes and its depth of emotion as it explored the continuing effects of violence long after a war.

The introduction of the live-action version of Rurouni in 2012 gave the beloved anime a new dimension, allowing fans a new look at Kenshin, the ex-assassin who has resolved never to kill again, wandering Japan as a peaceful young man.

Ten years into this new life, he meets Kaoru Kamiya, a feisty young woman who’s defending her dojo against a sinister killer posing as the assassin that Kenshin used to be. Along the way, he meets and helps new friends Sanosuke and Megumi, building a new family where he now belongs. 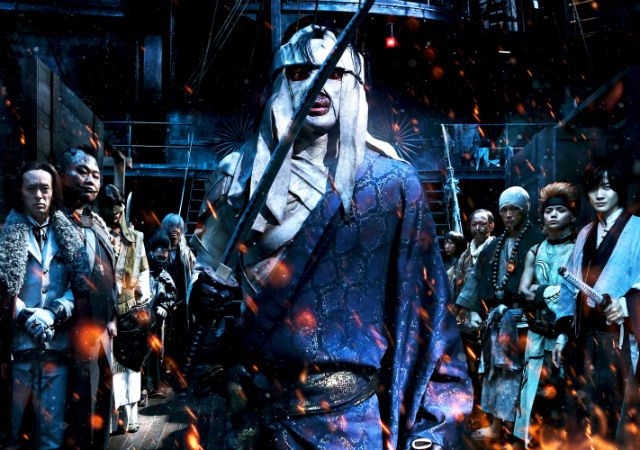 The upcoming sequel moves into the series’ iconic Kyoto Arc, which features the malevolent Makoto Shishio as a challenger trying to take control of Japan. Only Kenshin stands in his way – but what about his vow of non-violence? (READ: Warner Brothers releases ‘Rurouni Kenshin’ sequel teaser)

All photos courtesy of Warner Bros