MANILA, Philippines – The film may have been about a star’s washed-up career, but dark comedy Birdman is about far more than the downward spiral its lead character suffers.

The critically acclaimed film has earned several nominations and wins across the different awards ceremonies. Recently, Birdman tied with equally acclaimed comedy film The Grand Budapest Hotel with 9 nominations each for the 2015 Oscars.

Alejandro González Iñárritu – who previously directed films like 21 Grams, Babel and Biutiful – presented his thoughts on the cast and crew, plus his hopes for the film, in the Q&A below, provided by 20th Century Fox.

Congratulations on the film.

Alejandro: I hope the people get it. The humor is difficult. They say that humor doesn’t travel as well as drama, but we’ll see.

When did you first have this idea?

Alejandro: Like 5 years ago, I was playing with the idea of a guy that was struggling with his ego in the mirror, and the image of himself. It was a little character that I had in another project that I was developing. So the idea of doing something with ego was basically the germination of it. When did you come up with the idea of Birdman as his alter ego?

Alejandro: I think that there was a moment that we were playing with the idea of him being an old actor, with this alter-ego voice over from the theatre, but there was something that felt old-fashioned about it.

Alexander Dinelaris wrote some independent theater plays, and I think him and Nicolas and Armando were not happy with that idea, and then suddenly one day I thought about the alter-ego being Birdman, this superhero.

When I found that, we already had a draft with the old voice, but I thought that was exciting, because in a way it brings it to the times in which we are living.

The voice really belonged to what we are now suffering, which is this global corporate entertainment sh-t, and I think that was a beautiful relationship for all of us. We got very excited. That was exactly the moment at which I thought, “Ah, okay.” It was the way we found that voice that was important to make it a little bit more contemporary.

What were the themes of this project for you?

Alejandro: I think that as an artist, your only responsibility is to talk about your circumstances, or your context, in a way, and to be truthful to that. Through the circumstances and context that I have been living, I felt comfortable and uncomfortable talking about ego.

For me, it was a way to explore that territory, which can be fascinating, it can be embarrassing, it can be very contradictory. What I’m saying is it was for me a way to talk about what I have experienced.

But always the challenge of what I, and all of us, were trying to do was to maintain the voice of the character, very close to the heart. Not commenting on things from above, ironically or pointing and preaching, but really true to one guy that is going through this process, which is painful and human and vulnerable, and always try to make sure that the story really takes place from his point of view, and never take opportunities to do more jokes and more comments than necessary.

This is not really a film about acting – would you agree?

Alejandro: I was afraid that someone in the movie would perceive this as a film of the actor’s acting process, which honestly, I don’t give a damn about. Actors are the most common figures chosen to represent ego, but I think every human being has ego – mostly politicians, and company directors, and dictators.

The world is becoming a victim of the ego of the human sprit, and I think that anybody, any kid, can become a victim of his own ego. I hope that everybody can attach to this idea that the ego is dangerous, it can bring us up and can kill us in one second, and if we empower him, it’s terrifying. It can be crazy. Why was Michael Keaton right for this?

Alejandro: The reason Michael was able to play this role as he played it, naked, emotionally and physically, is because he’s above all that. I haven’t seen any actor more free from vanity than him. He’s one of the most self-assured people that I’ve met. He doesn’t have any concerns about people telling him anything.

He doesn’t empower anybody to tell him who he is. That’s why he was able to do that, because he can see this from above and laugh and really explore without any personal sensitivity, and that was fascinating. Did his history with the Batman films enter into your decision?

Alejandro: Yeah. He was always a strong candidate, and then I thought, ‘This is perfect.’ Not only because of the authority and the past that he has, but also because he is one of the few actors that really can jump from comedy to drama instantly, and that’s very difficult. And to be lovable is hard! To be a prick like the character he plays, and to still be lovable – it’s hard.

Did you sense any hesitation from him?

A: We went to dinner and he was lovely and he was very honest, and I think he jumped in. There was no hesitation. It was great.

It’s great to see Zach Galifianakis in this kind of role. Talk about casting him.

I want somebody that is lovable, because I didn’t want to have a clichéd kind of bad guy. I felt that the guy has one of those faces that you can instantly consider a good friend, a guy that you will hang with immediately, and drink a beer with.

At the same time, if you put your trust in somebody then they can **** you. I think he’s funny, but he’s very sensitive. Even with all the satire and irony that he has, he’s the most sensitive human being that I have known, so there is something of the teddy bear about him that I like. It was a bet; it wasn’t a rational choice, it was more instinct. 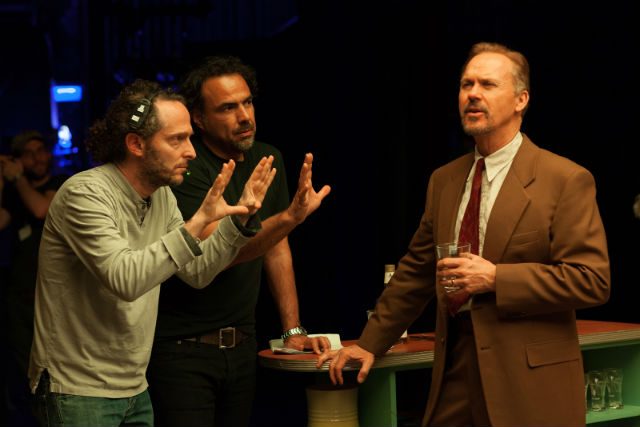 You have history with Naomi because you directed her in 21 Grams. Had you always planned to work with her again?

Alejandro: I invited her and she was very happy. She was living in New York at that time so it was lucky that she could do it.

How about Andrea Riseborough?

Alejandro: That was a role that took me a really long time to cast. I looked at many people and I didn’t find anybody that I was convinced with. It was a very wacky, quirky role, and when she did it I knew that it was her, because she did it right in the tone, and she understood who she was – she was not judging.

Many other people judged her, but she understood her. She nailed that kind of crazy, funny, nervous character. It was a character that has a lot of strange features, and she nailed it.

Did Edward Norton’s background in theater make him the obvious choice for Mike Shiner? He’s a great character but also very arrogant. Did you have to convince him to take it on?

Alejandro: Well that was a tough one because again, I think I wanted there to be a quality of reality in each of them that really projects to the film. I think with Edward, he’s a theater actor, so in a way there was some kind of mental reality to Edward – and again, being a great actor and a guy that has confidence in himself – he loved to play that.

You rarely get the chance to rehearse movies but you did on Birdman. Why was that so important?

Alejandro: We were finding everything so that everything was meticulously prepared and designed for us to arrive to the shooting, basically knowing each lap, each step, each space, and every demanding action and tone. Then you arrive and sometimes it works, and sometimes not, and it’s terrifying.

With the pace and the timing and the rhythm, it’s magical sometimes whether it happens or not. It was like playing live. There’s no way to edit this. You’re playing live, so if it doesn’t happen there, you can’t help anybody. One scene that doesn’t work will sink the whole thing. Were there real public in Times Square scene (when Riggan is accidentally locked out of the theatre and has to walk through crowds of people wearing just his boxer shorts)?

Alejandro: It was something that, honestly, was a lucky strike (laughs). We settled there in the middle and had this band play to distract all the people, so I was able to really get all the people to one place, because I didn’t have money to put extras. We did it and it was very much the real thing, by a trick of manipulation.