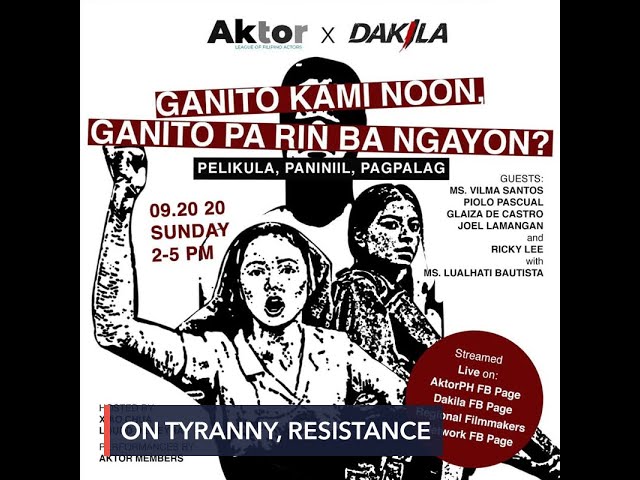 Vilma Santos and Piolo Pascual are set to join a conversation on “film, tyranny, and resistance” to be held ahead of the 48th anniversary of the declaration of Martial Law.

Santos and Pascual starred as mother and son in Dekada ’70, the 2002 film adaptation of Lualhati Bautista’s acclaimed novel about a middle class family navigating the injustice of that era. Santos also played the title character in Mike de Leon’s Sister Stella L, an award-winning film about a nun who finds her voice as she speaks out against government injustice.

The stars will be joined by director Joel Lamangan, who was imprisoned and tortured for 4 years under the Marcos dictatorship; and actress Glaiza de Castro, who starred in the 2018 film Liway as the titular anti-Marcos activist living in a prison camp with her young son.

Bautista, whose other novels GAPÔ and Bata, Bata…Pa’no Ka Ginawa? were also set in the Martial Law era, is joining the discussion. Screenwriter Ricky Lee, who was arrested and tortured during the Martial Law years, will also be part of the panel.

The conversation will be moderated by historian Xiao Chua and writer Lourd de Veyra.

The discussion will go live on Sunday, September 20, from 2 to 4 pm on the Facebook pages of AKTOR, DAKILA, and the Regional Filmmakers Network. – Rappler.com