“We must not forget,” Christine (Liza Soberano), a museum guide, tells a group of schoolchildren while talking about the Spoliarium.

She looks intently at her younger audience, then she subtly shifts her head. She looks towards at her other audience, us, and says, “we must never forget.”

From cautioning about the lessons of history, she segues her discussion towards pop culture, telling the museum’s young patrons that the painting also inspired the Eraserheads to compose their hit song, which she says the band mistakenly titled "Spolarium."

She is abruptly interrupted by Raf, a man around her age, who says that the Eraserhead song she refers to isn’t spelled "Spolarium" as she claims, but "Spoliarium," exactly like Luna’s masterpiece.

They briefly argue, prompting a romance that spans from when the two lovers were still dreamers in college up to when the realities of life forces them to compromise.

From argument to marriage

The opening of Antoinette Jadaone’s Alone/Together doesn’t just function as a convenient way to introduce the film’s two characters and their devotion for each other.

What the opening does is plant the seeds of the many themes and interests that pervade a familiar love story. It prescribes its characters with political color, and with that moment where Christine somewhat breaks the fourth wall, forwards a plea for resistance and activism. The cute argument between Christine and Raf which jumpstarts the film is cleverly staggered. The films chronicles the romance through thick and thin, extending a discourse that attempts to marry usually discordant elements of history and pop, of relevance and escape, of conflict and love, of art and entertainment.

While Jadaone still subscribes to the cornerstones required of a romance, she peppers her film with interesting details that accumulate and convince you that Alone/Together is more original than what its affinity with popular love tandems and mass appeal makes you believe.

There is merit in the decision to make the characters be cultural workers and philanthropic professionals, beaming with all the idealism that would be tested and shaken. There is not just charm but principle in setting the romance in the real world, in the University of the Philippines, in the National Museum, in New York City and its prominent museums, because it grounds the fantasy and reverberates its aches.

There is palpable gravity to the thwarted romance in the face of all the realizations about how the world can push you to settle for compromise. 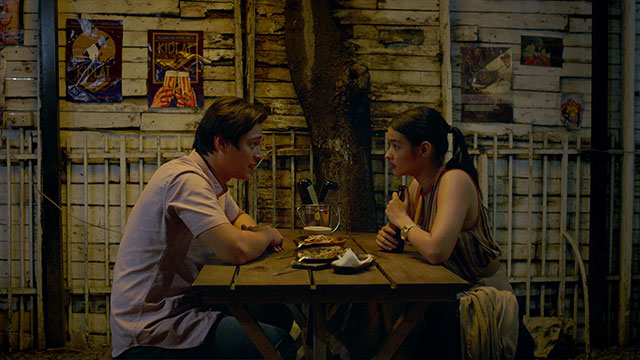 Alone/Together is brisk in showing the pleasures of being and staying in love.

Jadaone efficiently maps the love story, skirting unnecessary subplots and side characters to portray a romance that is as foolishly pure as Christine’s messianic ambitions or Raf’s imagined future for the two of them.

Heartbreak comes early in the film.

After showing the graduation of Christine which would have the audience believe that she is on her way to change the world as she has told Raf, Jadaone shows what has happened to her several years after. She’s the date of a different man (Luis Alandy) in an event recognizing the efforts that aren’t hers. To add further pain, Christine sees Raf, with another girl (Jasmine Curtis-Smith) in tow, being honoured in the same event.

Jadaone embraces this melancholy, using it to pervade Christine and Raf's second stab at romance.

Alone/Together becomes a love story that is handicapped by baggage which isn’t just limited to memories of a failed romance but forces that are beyond the yearnings of the heart. While the film navigates all the opportunities for the two to reignite a relationship, seemingly following the established formula of most commercial romances, it does so with a subtle understanding that love commingles with other motivations, whether they be personal frustrations or unavoidable economic forces.

However, Jadaone never loses track of the fact that her film is about youth and should be youthful. It doesn’t needlessly force maturity or seriousness for a bid at relevance in a genre that has been criticized for escape. Instead, she enlarges the breadth of the typical romance, expands its scope to understand that the heart doesn’t work in isolation.

Speaks to the youth

There is one scene in Alone/Together that sums up its very unique quality.

Christine, in corporate attire that makes her look almost ethereal, enters the rundown hospital where Raf works as a doctor. Amidst the noise, the cries and wails and in a location that reeks of suffering, she’s close to being a disconnected figure, an alien in a world that is not hers. This is Jadaone’s film. It is a film that is clearly within the genre that aspires for escape from the real world. However, it actually treads that real world, looking, with the help of Neil Daza’s precise lensing, more forlorn and palpable than just pretty and glossy.

The conspiracy between the mechanics of a romance and palatable realness is strange at first, until it all makes beautiful sense.

Soberano reveals herself as a formidable performer, an actress who can go beyond innate charisma to draw her audience into her character’s plight. In a gesture that is very mature, Gil generously grants Soberano the spotlight, allowing his character to stay as a support.

Alone/Together speaks to the youth who are rushing to be the successful people they’ve imagined themselves to be when they were still in college, to the youth who get disillusioned as soon as they are waylaid or are diverted from their expected routes.

The film shoots for the stars by talking of failure and concession within a story that has the broadest of appeal. Near the end of the film, a character says that “art should always serve the people I belong to.”

Jadaone has made a film that lives up to the lasting sentiment of its characters.   – Rappler.com