The “war on drugs” has never been an easy topic of discussion. Since Rodrigo Duterte’s rise to power in 2016, the machinery responsible for state-sponsored killings had been set in motion, claiming thousands of lives, mostly from the urban poor. Yet the fast-paced nature of today’s mediascape has left most of these important stories buried under the entertainment economy, forgotten in favor of the next thing that triggers moral outrage, of which there is plenty.

Cinema has responded to this erasure by serving as an archive, taking time to capture the milieu and the changing attitudes towards these violations of human rights. Films such as Respeto (2017; dir. Treb Monteras), Neomanila (2017; dir. Mikhail Red), and BuyBust (2018; dir. Erik Matti) place their characters in the middle of a fictionalized community ravaged by it; The Nightcrawlers (2019; dir. Alexander A. Mora) shadows the lives of those who are tasked to report it; and Aswang (2019; dir. Alyx Arumpac) and Tao Po (2021; dir. Mae Paner) both offer a haunting picture of those directly within the web of loss. While any cinematic effort will never bear the same weight as the stories they draw from, each work brings audiences asymptotically closer to the roots of these injustices; the repetition becoming a continuous effort at defying the network of neglect.

The ‘Aswang’ syllabus: Articles to read after watching the documentary

Unlike the thrillers, dramas, and documentaries that came before it, writer-director Jun Robles Lana makes the bold choice of making Big Night a comedy: one that places the wide, mainstream audience of the Metro Manila Film Festival (MMFF), usually composed of families, into the subjective reality of the wrongfully accused.

Dharna (Christian Bables), a beloved hairdresser from the slums, suddenly finds her “dead name” on the barangay “watch list” — a document of suspected drug addicts and pushers who often become the target of summary executions. Reminiscent of Franz Kafka’s The Trial, Dharna goes on an Odyssey towards proving her innocence, navigating the bureaucratic structures that have imprisoned her to this fate while simultaneously trying to figure out why she is on the list in the first place.

The first scene of the film — where a boy who is assassinated midday is made the butt of a sexual joke, while the rest of the community continues to go about their All Saint’s Day celebration as if nothing had happened — is a jarring, almost disgusting opener that completely sets the tone for the rest of the film. In displaying the lack of sustained moral outrage and panic in the community, it captures the most undiscussed aspect of Philippine society: how we have become desensitized to violence and how moral apathy pervades not because of people’s malicious intent or commitment to ignorance, but because people feel the need to move on in order to live, to keep on making a living.

But when the joke is on you, things aren’t so funny. It isn’t until Dharna herself is included in the watch list that the threat she’s been witnessing becomes real to her. Yet her worries are dismissed by everyone else, even her boyfriend Zeus (the charming scene-stealer Nico Antonio) who is preparing for his last pageant. They argue that Dharna is an upstanding citizen who has a reputation for goodness. What could go wrong? Only her friend Biba (Sunshine Teodoro), her father (Ricky Davao), and her siblings (Awra Bringuela and VJ Mendoza) take her seriously.

Whatever works in Big Night is because it harnesses the talents of Christian Bables — whose star-making turn in Die Beautiful five years ago garnered him acclaim. Previous works have failed to utilize what makes him such an indelible onscreen presence: his inherent lovability, his underdog quality, the levity he brings to every role, no matter how serious, and the rich inner life he imbues each character. Around generous actors, Bables becomes a force to be reckoned with and Big Night is filled to the brim with them — from the corrupt politician-turned-bar owner Madam Chair Cynthia (Eugene Domingo), the religious hypocrite Mr. Roja (Soliman Cruz), the socialist midwife Melba (the underrated Janice de Belen), and the movie star-turned-politician Donato Rapido (John Arcilla). Lana has always been an actor’s director and the performances he draws out from each one turns stars into an array of constellations. 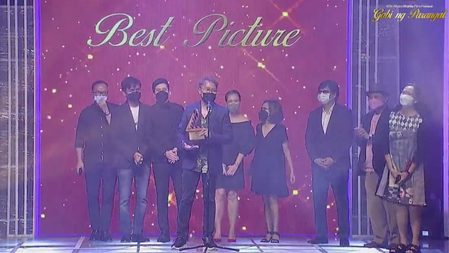 When Dharna requests help from barangay officials and her loved ones, her principles are tested at each juncture and, knowingly and unknowingly, she is subjugated without reward — putting makeup on cadavers, helping pregnant women give birth, offering to give free haircuts, pretending to convulse to help an ambulance pass through a checkpoint, and walking for hours around flagpoles and across the slums.

There is much about the circumstance that merits a breakdown, each scene added to a growing list of frustration without release. Because what do you do when those in power are more concerned about what they can gain than with what you can lose? Who do you go to when those who are tasked to uphold your rights are the ones taking them away? How do you negotiate when your life’s on the line? By asking these questions and spotlighting these moments, Lana creates a portrait that is less about the resilience of Filipinos and more concerned with how this fear of death is taken advantage of by others.

Crucial to understanding this is how entertainment becomes complicit to these injustices. People at positions of power use spectacle as a way to distract patrons and accrue influence over the community, while simultaneously planting manipulative seeds. With people at bars and watching movies, there is an illusion of safety that allows work in the underbelly to continue. It’s a terrifying truth, especially considering our country’s long history of celebrities-turned-politicians, a tradition that is likely only to continue in the upcoming national elections.

It’s easy to see the ending (one that, to me, registers as a dream sequence due to the blackout beforehand) as one that lacks imagination and hope for its character. But Big Night is not an empowering film. It can’t be, because the mere conditions from which it draws its absurdity from is cruel and oppressive. What it manages to highlight is how communities can become acclimated to this disempowerment and how abuse can become commonplace, so much so that people lose the need to question it. It shows how systems breed tyrants who rule under the guise of benevolence and how citizens, no longer used to kindness and equity, learn to settle for less and are forced to participate in a game rigged against them.

When Dharna looks into the camera, it is an admission: that even for a filmmaker as talented and socially aware as Lana, he cannot imagine a way out of the labyrinth of suffering. Instead, he asks that of us as an audience: to stare at the faces we’ve long been ignoring. – Rappler.com