Facebook Twitter Copy URL
Copied
If you’re looking for a profound and philosophical action film, then that train has already left

I used “annoyingly fun” to describe Bullet Train because I don’t know what other oxymoron can best capture the delirium that transpired in its two-hour runtime.

I’d be lying if I said I was immediately hooked on the film as it went along. The chimpanzee-with-a-machine-gun editing and chaotic evil exposition dumps were occasionally off-putting, to say the least. The film’s penchant for animated neon title cards drew it dangerously close to Suicide Squad (2016) territory (thankfully, we were spared from the constant needle-drops). I’m also not sure if its sprawling Japanese backstory, Bolivian massacre tangent, and Russian family soap opera neatly fit together as a whole.

But, about halfway through the film, the cleverness buried underneath all of its mess slowly unearthed itself. It’s not “clever” in the usual sense, it’s a certain kind of cleverness that’s so dumb it’s smart. Bullet Train is transparent about its lackluster depth. It operates in a small window of polarities, routinely switching between “distracting” and “playful,” like a child banging together toys from completely different brands and categories.

A samurai, a Momonga mascot, a deadly snake, and a Mexican assassin collide in a Japanese bullet train LEGO set. Stuntman-turned-director David Leitch is the orchestrator of this playdate, and he has decided to deal cruel, sometimes ironic, twists of fate on his characters, resulting in a crowd-pleasing romp once it shuts up and lets the action do the talking.

Based on the Japanese novel Maria Beetle (published as Bullet Train in English) written by Kōtarō Isaka, the film wastes no time translating the hitman-on-a-train conceit that made the source material engaging. The main difference is the tone; wherein the book is decidedly a thriller, the film has its eyes set on turning its A-list stars into relatable quirky leads — albeit to varying degrees of success — in a fast-paced action comedy.

Brad Pitt plays Ladybug, an American assassin tasked by his handler, Maria Beetle (Sandra Bullock), to obtain a briefcase traveling in a bullet train from Tokyo to Kyoto. Inside this colorful location is a caravan of high-class criminals looking to fulfill their own personal assignments while dealing with the ruptures of fate. Along the ride are Tangerine (Aaron Taylor-Johnson) and Lemon (Brian Tyree Henry), the British hitman duo. They both find themselves in the middle of comical situations, with the latter having an obsession with Thomas & Friends.

The ensemble cast also includes Joey King as an assassin passing off as a schoolgirl, Bad Bunny as a vengeful Mexican executioner, and Zazie Beetz as a venomous killer. Other actors involved include Logan Lerman, Michael Shannon, Andrew Koji, and Hiroyuki Sanada. That’s not counting the numerous cameos that certainly give away the fact that the film was shot around the same time The Lost City and The Adam Project were in production. 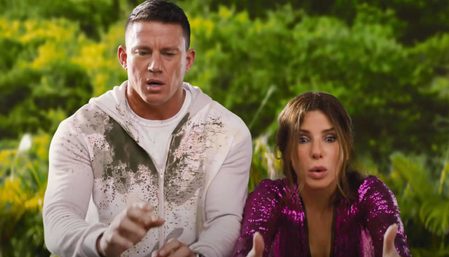 Director Leitch, seemingly interested in all his toys and their novel-like backstories, bites off more than he can chew. The opening half of the film is excruciating since it feels the need to show, tell, demonstrate, and do just about everything in its power to grab the audience by the neck and pour everything they need to know, all at once. Some are character-based and clearly made for stylistic choices, and others are set-ups for comedic punchlines that can be hit-or-miss. It’s almost as if the film is afraid that the attention span of viewers will scurry away unless it cuts to a shiny animation.

Pitt, as the lead character, seems like a no-brainer. His strength is in his laidback charm – Once Upon a Time in Hollywood showed that (and won him an Oscar). By doing close to nothing and letting his mellow and inoffensive attitude take centerstage, he captures a zen-like personality that sits squarely in between the spectrum of John Wick and Deadpool (which, coincidentally, are characters the director has had his hands on). The best part of the film, which rears its head in the second half, is when it’s slowly revealed that Pitt’s character is caught in a storm that he wants no part of; he’s in the wrong place at the wrong time.

More bad news for Pitt is that all the other parts in this film think they’re the main characters in their self-contained movies, and I’m talking about literally ALL parts, even inanimate and non-sentient objects. These converging plot points make Brad Pitt more of an outsider looking in, oblivious to the character motivations that have been blasted in our faces and uninterested in what savage joke fate has to offer him. The duo of Tangerine and Lemon stands out among the ensemble, which is a shame since the film feels more interested in the shaky, if not outright tedious, Japanese crime syndicate subplot.

Luck and the unpredictability of well-laid-out plans play a huge role in the film. There are nifty set-ups periodically planted like Chekov’s gun throughout the film, and they always seem to go off at the worst possible moments. Attempts at gaining control turn out futile, and characters learn this lesson the hard way. There’s something weirdly ingenious about a train with a predetermined route being host to an array of sporadic and off-the-rails confrontations. Or maybe they just chose a bullet train because it looks nice. It’s not like the film shows any indications of wanting to be the next Snowpiercer.

The action, of course, is strong and, in many instances, crafty. It isn’t a shootout or hand-to-hand fight scene every five minutes, so there’s a great deal of variety in the staging and choreography. In a genre now saturated with hours-long gun ballets and invincible badasses, it’s nice to see an action film aware of the immense amount of luck and plot armor that runs in the veins of main characters. I realized that I could be entertained by a guy who happens to be lucky just as much as a guy who trained his entire life for a third-act climax.

If you can get past the childishness and turbulent opening half, I don’t know why Bullet Train wouldn’t be a fun ride. If you’re looking for a profound and philosophical action film, then that train has already left. But, if you’re in line for a fun and exhilarating ride that is better than it has any right to be, then you’re at the right station. – Rappler.com