Facebook Twitter Copy URL
Copied
'The question now is, will the current government listen to what the environmental defenders are telling them?'

What drives environmental defenders to risk their lives?

This is one of the major questions answered in Karl Malakunas’s Delikado. The closing film for this year’s Cinemalaya Festival tells the intertwining narratives of environmental activists defending the forests and seas of Palawan, considered as the Philippines’s “Last Frontier.”

One of these stories follows local lawyer Bobby Chan and his group of para-enforcers who confiscate chainsaws from illegal loggers to prevent deforestation. The other features then-El Nido Mayor Nieves Rosento as she campaigned for reelection against an alleged corrupt opponent.

Hidden by the allure of tourism and promises of development are decades of illegal logging and fishing in the province, enabled by incompetence of the local government in enforcing environmental laws. The movie presents the numerous dangers they faced within battlegrounds ranging from slander in the political arena to violence within the forests.

Illegal logging in Palawan stokes fears of a mining resurgence 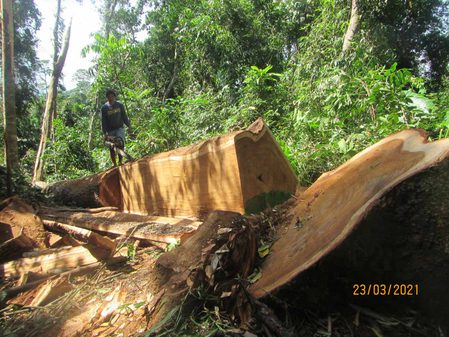 Malakunas’s direction does not hold back on bluntly capturing the tension and precariousness that hovers over their lives. The film heavily features footages of Chan’s group trekking through the forests and catching illegal loggers in the act. The use of POV shots and shaky camera angles emphasized the grittiness and chaos during their operations, a depiction of heroism that is in contrast with the glorified, romantic, and at times overproduced portrayals in other media.

What Delikado also features effectively is that these environmental defenders are real people living ordinary lives. They sing during their moments of rest, they joke around, and they also struggle when preparing speeches and reports. They have families to go home to and take care of. They face real consequences, losses, and hardships, just like the rest of us.

Malakunas fittingly accomplishes this by giving footage of the daily activities of Chan, Rosento, and others time to breathe as they go to church or come home to their families after a day’s work. Interviews with these defenders were also conducted to present their raw emotions. Some of these scenes are even conjuncted with majestic shots of Palawan’s mountains, forests, islands, and seas, as if to remind the audience of what is at stake for them.

Humanizing environmental defenders is needed at a time when red-tagging them and being branded as nothing more than anti-government nuisances is becoming normalized. Politicians and their allies openly threatening activists is not just a trend in Palawan; it is arguably enabled by the brashness of national government leaders in recent years, which has led to the Philippines becoming the deadliest nation for environmental defenders worldwide, as shown in the film.

The boldness of the “enemies’ side” of this narrative may be shocking to some viewers, especially foreign audiences, but it only adds to the emotional impact of the movie. From politicians outright stating that all of them offer money to voters, to some of their allies threatening to kill defenders on live radio, it challenges viewers to openly reflect on these realities that many Filipinos know but do not want to confront out of either fear or blissful ignorance.

As a Game of Thrones character once said, “Perhaps we’ve grown so used to horror we assume there is no other way.” But the truth is there is another way. Delikado ultimately shows the viewers that when the authorities that should live up to their mandate of protecting the environment fail to do so, the people can actually stand up, demand action and accountability, and also do something about it themselves. The stories of Chan, Rosento, and their allies are representative of other Filipino environmentalists who are facing similar struggles in their respective regions, whose own narratives are waiting to be told.

Through all of the death threats, accusations of being a drug trafficker, and unfortunately the loss of lives, what drives these Palaweños to be defenders of the lands and seas?

The film presents several answers to this question. For some, it is protecting the environment as it is an inseparable part of their community, their culture, and their collective identity. For others, it is to provide a future for their children and grandchildren such that decades from now, they will still have towering forests and pristine waters to appreciate and take care of. And there is also the motivation of saving God’s creation as part of being stewards of the Earth, a moral responsibility that moves them to be people for others.

Delikado is an emotionally moving film that shows how environmental protection is not just a one-dimensional issue. It involves political corruption, human rights, intergenerational justice, and the narratives and motivations that drives ordinary people to do extraordinary actions.

The question now is, will the current government listen to what the environmental defenders are telling them? Or will it simply let the system of impunity continue to perpetuate the dangers imposed on those daring to go against the narrative it wants to control?

Even writing this review for this media platform is dangerous nowadays, you know. Yet the truth shall set us free. – Rappler.com