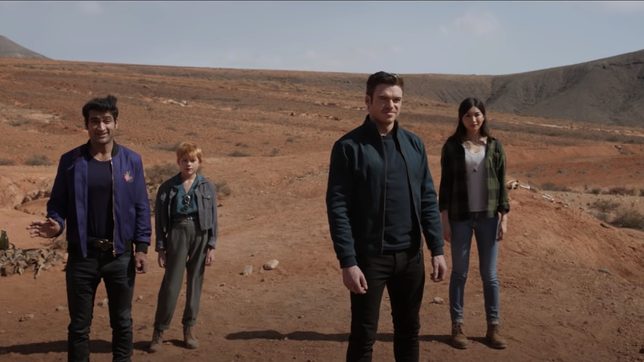 ETERNALS. The upcoming Marvel film is set to screen in US cinemas in November.

Facebook Twitter Copy URL
Copied
'Eternals' is an enjoyable but flawed addition to the Marvel Cinematic Universe, failing to fit the big screen in its scope, suffering from the weight of expectation and representation

After Avengers: Endgame, no one but Marvel knew where they were going. With Robert Downey Jr., Chris Evans, and Scarlett Johnasson bowing out in the exhilarating yet imperfect conclusion, Endgame seemed to end a chapter for Marvel: one that was dedicated to perfecting a formula and amassing a fanbase that not only cared for its characters but trusted wholly that they will, in the grand scheme of things, deliver a worthwhile epic. This decade of teasing its audiences about the next thing has taken Marvel out of bankruptcy and catapulted it into one of the largest, most powerful intellectual properties (IPs) in the world.

Phase Four of the Marvel Cinematic Universe (MCU) has been a period of valuable explorations. However, the Marvel films, particularly the recent origin stories, have had mixed results: Black Widow was a serviceable action film that passed the mantle from Johansson to Florence Pugh’s Yelena, while Shang-Chi and the Legend of the Ten Rings finds itself introducing one of Marvel’s most interesting villains, only to drop the narrative in the third act. Adding the unexpected death of Chadwick Boseman, lawsuits over contracts over theatrical release and the modest box-office success (by MCU standards), you have an IP that is being tested.

Chloe Zhao’s 157-minute foray into the MCU — Eternals — arrives at a precarious time. Marvel enlisted Zhao and other indie film auteurs in the hopes of finding ways to subvert audience expectations to create a new Marvel experience. Fresh off of her Academy Award wins, much expectation is put on Zhao — especially as news broke of the high-wattage stars such as Angelina Jolie and Salma Hayek in the cast, and how much of the film was shot on location with natural light to preserve the evocative quality that is Zhao’s filmic signature (see Nomadland, moreso The Rider).

Eternals follows its 10 titular ancient aliens as they protect humanity across several millennia from the Deviants — largely forgettable, poorly-rendered CGI monsters. When the Deviants are eradicated, the Eternals await further instructions from their creator, the Celestial Arishem, effectively disbanding and secretly living among the humans for hundreds of years. That is, until a tragedy forces them to reunite and reassess their roles in humanity’s rise and fall. It’s a titanic task for any audience member to take in, so much so that there have been YouTubers dedicated to explaining the lore around the Celestials and the Eternals themselves.

The core of Eternals is the age-old struggle of being human and humane, finding itself closer to other science fiction films such as Denis Villeneuve’s Dune or Steven Spielberg’s A.I. than its Marvel predecessors. Despite being hailed as deities, the Eternals have been largely non-interventionists: interfering only when Deviants are in the mix, choosing to even be bystanders even to genocides. When the “emergence” causes the characters to reckon with their passivity and the virtue of their inaction, it becomes compelling.

Without a doubt, it is Marvel’s most intriguing film in years: a welcome attempt at breaking away from all of the beats that Marvel loves to hit. There are moments where it thrives on the friction caused by philosophical differences between its characters, such as when Phastos (Brian Tyree Henry) argues whether or not to rejoin the Eternals or to stay with his husband and son.

But overall, there is a lack of a risk in its attempts at drawing lines between monstrosity and virtuosity; responsibility and agency. Eternals would have been exponentially better had it revealed to its audiences Knives Out-style its secrets from the beginning. But much like the final lip sync for the crown on RuPaul’s Drag Race, Marvel has been defined by the necessity of its reveals, no matter how ineffective they’ve become.

In the past, Marvel has gotten away with many of its mistakes by creating characters that the audiences root for, the emotional attachment (and parasocial relationships) developed serving as armor against any criticism.

But many of the Eternals seem dispensable. The central love triangle between Sersi (the stunning Gemma Chan), her former lover Ikaris (Richard Madden with his perpetually furrowed brows), and Dane Whitman (Kit Harrington) hardly has heat, even if Sersi and Ikaris do have sex.

The most interesting characters are at the periphery: Makarri (Lauren Ridloff, the first deaf character in the MCU) and Druig (Barry Keoghan) have more chemistry than the central love triangle; Ajak (Salma Hayek) is reserved for poorly-written flashbacks; Thena (Angelina Jolie) is an overpowered character that is shockingly pacified by millennia of memories (Mahd Wy’ry) before she is anything interesting; and Gilgamesh (Ma Dong-seok) is relegated as caretaker, whose bonds with Thena fail to be deepened.

Even Kumail Nanjiani, whose charm and charisma is undeniable elsewhere, supplies humor as Kingo, which feels out of place given the film’s tone; an announcement of formula trying to rein in Zhao’s voice. Nanjiani’s departure within the story feels inconsequential. The weight of a thousand years of existence does not seem to reflect in the relationships between the Eternals, nor does it elicit a sense of responsibility from them for their actions and inactions. It is here that the lack of emotional connection makes itself apparent: not only between the characters and the audience but among the characters themselves.

There is just simply not enough time to accomplish everything Eternals seeks out to do, no matter how interesting it is on paper. Given the sheer ambition and the scope of the story, one wonders why Eternals wasn’t turned into a TV series: with an episode on each of the superpowered beings with an additional one or two episodes dedicated to tying the story in an epic climax.

Marvel Studios’ foray into television has found success — as evidenced by the critical and commercial love for WandaVision and The Falcon and the Winter Soldier, among others. The episodic nature of the format creates room for Marvel’s established formula while allowing more expansive narratives, creative experimentation, and in-depth character studies – the kind of things that the franchise has needed to refresh it. More than anything, this continued patronage is proof that the fanbase, cultivated through a decade’s worth of movie-screenings, was willing to follow them wherever they went.

Despite the criticisms, I still found myself enjoying Eternals the most out of the Phase Four films (so far, maybe even out of all of Marvel’s superhero introductions). There is a perspective that attempts to make itself known and felt, and I do wish I knew the Eternals individually way more. I just cannot help but imagine what it could have been had it been given more time to gestate, had its wings not been clipped. Amidst the mess that pulls everything in thousands of directions, there are glimmers of greatness within the film itself, but not enough to merit a second viewing. – Rappler.com