In Sharmila Parmanand’s extensive research on sex work, she states that the stigmatization of the topic “increases the precarity of sex workers and inadvertently normalizes exploitation.” Rather than being provided with legally enforceable rights and dignity in their labor, the criminalization of sex work further compromises sex workers’ health and safety due to unchecked discrimination and an inability to report violations.

The Philippine Sex Workers Collective echoes this idea and rejects the dominant portrayal of sex workers as victims, even claiming that “when women have to choose between precarious jobs, sex work is a better option for some.”

I bring these up because these ideas seem to serve as the backdrop for Julia Barretto’s character, Candy, in Jason Paul Laxamana’s (100 Tula Para kay Stella, He Who Is Without Sin) latest film.

Candy asserts time and time again that sex work is her choice. She sees value in her labor and how she negotiates her body, saying that “tumaas ang sarili kong halaga (my self-worth increased)” when referring to the amount of money she gets from clients. Her work is influenced by her past socioeconomic conditions, with Candy being unwilling to trudge the same monotonous path as her poor family. Yet, even with all of these declarations of agency, Candy seems dissatisfied, or at least the acting and filmmaking want to make it look that way. 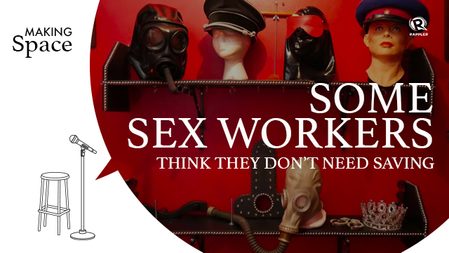 Perhaps the film’s actual message is that commodified bodies are horrible no matter what and that capitalism compromises any real claim of free choice. It turns out, Barretto’s character is still a victim even as she hustles her way into higher positions and amasses extra dough of her own volition. ”Dito lang ako magaling (I’m only good at this),” Candy proclaims about her line of work. Yet, she still gets stigmatized for it because it isn’t “clean,” a sentiment that is raised to her by none other than a man.

Expensive Candy fails the moment it adopts a male point of view, because what follows is a reductive look at sex work and an eerie romanticization of poverty. It has the gall to say that hard work is the answer to the myth of upward mobility. It also has the temerity to claim that happiness can only be achieved when you do “clean” jobs that are almost always determined by a patriarchal society full of hypocrites.

The story is about Toto’s virginity. Yes, seriously. The entire opening half is dedicated to Carlo Aquino’s character, who happens to be a teacher, getting constantly poked fun at for his virginity. Later on, the film becomes about Toto’s poverty, because it is the one thing that keeps him from constantly being with Candy, who asks for higher service fees. Then, as it nears the coda, it warps into a pseudo-suspenseful, bittersweet drama.

Predictably, the film asks us to root for Toto, even though it becomes progressively harder to side with him. He swindles and deceives his family and students in order to get enough money to pay for Candy’s services. The film’s writing, editing, and music would find my previous sentence jarring since they all seem to think this is a romantic gesture.

Nothing prepared me for the use of playful tones and comedic cues for scenes involving the abuse of power of a teacher and other legally questionable things. It was neither comedic nor endearing, but hey, it was all for “love,” and to quote the newly proclaimed King Charles III: ”whatever ‘in love’ means.”

The film’s handling of poverty and class, which is intertwined with its view of sex work, also leaves a lot to be desired. Toto is the embodiment of someone who reifies a hierarchy of work, “with domestic work seen as virtuous and sex work as stigmatizing.” And if the film actually examined this position, and how the structures in Philippine religion and culture likely motivate this kind of thinking, then maybe we would have better understood Barretto’s character in conjunction with these constraints.

Unfortunately, even as Barretto monologues as to why she resorts to sex work, the film still feels the need to portray her predicament negatively, in some cases, even parallelizing her behavior with addicts who relapse back into their vices. Toto treats Candy’s inability to divorce herself from sex work as a biting indictment on his poor socio-economic standing. In his mind, she wouldn’t have had to resort to her labor if he was just rich. In what stands to be one of the candidates for Sadboi Line of the Year, Toto says to Candy: “Ang mahal mong mahalin (Loving you is expensive).”

In reality, Toto, our male gaze point-of-view character, is a horrible person despite Carlo Aquino’s best efforts to remain charming. The most pernicious thing that a film can do with a selfish character is to not realize that the character is, indeed, selfish. Whenever Toto is confronted with his hypocrisy, his response is to either lie, say it was out of love, or refer to the desperation caused by poverty. So when he aids and abets academic dishonesty, deliberately blackmails students, and solicits money based on lies, he feels little to no remorse until he is eventually held accountable for them. In fact, his actions are seen as slick and cool, and transforms Toto into a more confident person.

But when Candy does sex work to earn money, there is little to no nobility or dignity afforded to her by the film. It’s almost as if the film views her as the more selfish character, unable to accept the predetermination that sex work, in all of its variations, is below “actual” capitalist labor. It’s a shame because Barretto gives a fine performance and certainly has the chops to portray a nuanced portrait of a sex worker who doesn’t view herself as a victim.

The ending seals the deal for this storytelling mess because we find out that, unsurprisingly, Toto and Candy are unfit for each other. Toto, who lost his job and is now working as a delivery rider, looks content and is happy to romanticize the idea that life will look kindly on him as long as he earns money the right way.

And for Candy? Well, Barretto must continually look dissatisfied because she isn’t earning money the right way. She is stuck in a perpetual loop, asserting time and time again that sex work is her choice. If this were a better film, maybe it would’ve listened to her the first time. – Rappler.com