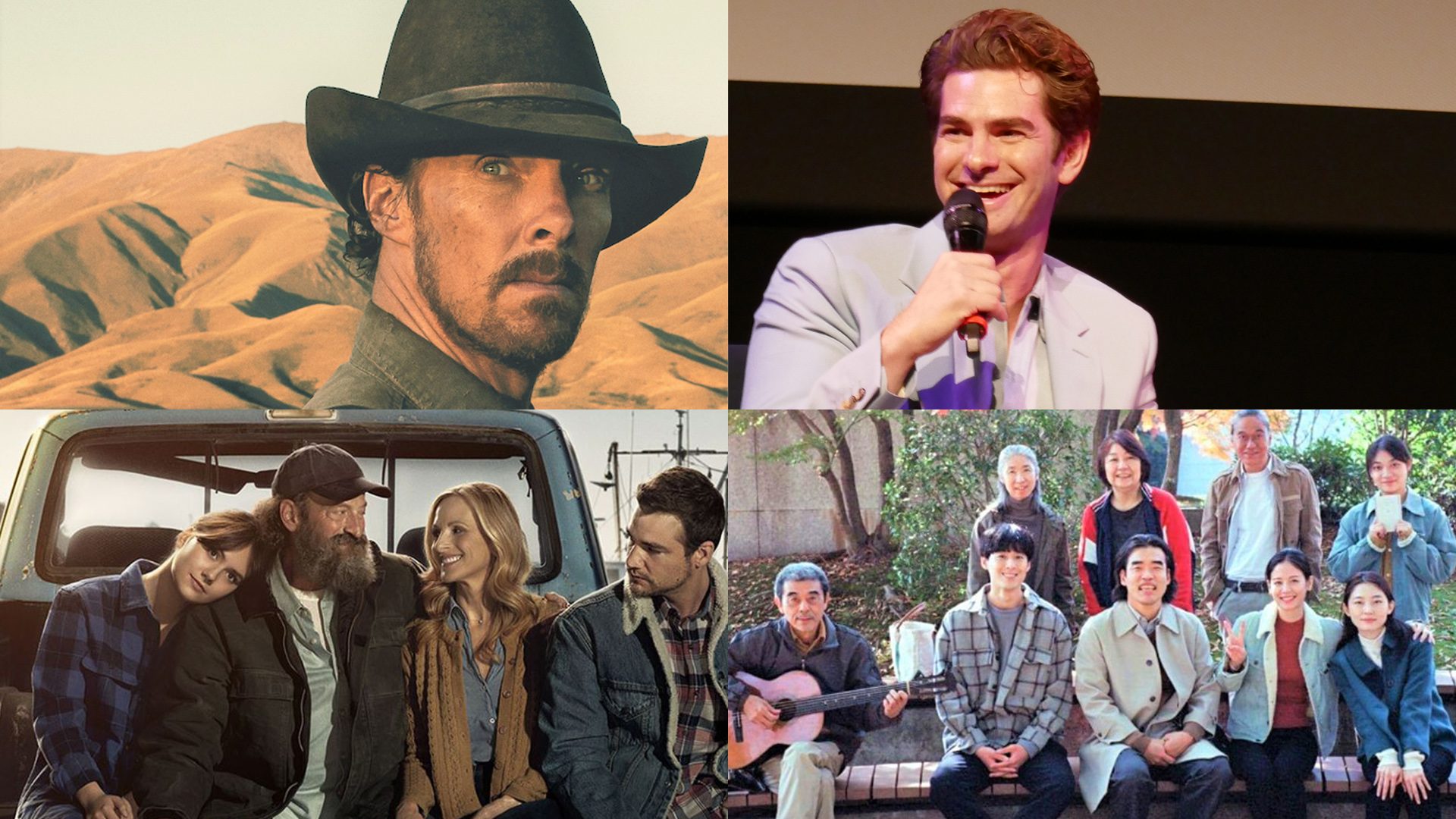 LOS ANGELES, USA – If Frederic Aspiras, nominated with Goran Lundstrom and Anna Carin Lock, wins for best makeup and hairstyling for House of Gucci, he will be the first person of Filipino heritage to win in this category in the Academy’s history when the Oscar trophies are handed out this Sunday, March 28 (Monday morning, Manila time).

If Japan’s Drive My Car triumphs as best international feature, Filipino actor Perry Dizon has the honor of being in the cast of director Ryusuke Hamaguchi’s film, which has been gaining momentum since it debuted in the Cannes Film Festival last year.

As it is, Drive My Car already has the honor of being Japan’s first film ever to earn the Oscars best picture nomination. But in the international feature category, formerly foreign language, Japan has won four times but three were honorary awards.

In Drive My Car’s story, the protagonist (Hidetoshi Nishijima), who is coping with his wife’s passing, directs a multi-lingual production of Uncle Vanya in Hiroshima. Perry, who plays a Pinoy cast member in the play, speaks Tagalog lines.

H.E.R., who made history last year as the first Filipina-American to win the Oscars’ best original song for “Fight For You” from Judas and the Black Messiah, will be back as a presenter this time.

Robert Lopez is the first Filipino-American to bag the Academy’s best original song prize when he and Kristen Anderson-Lopez triumphed for “Let It Go” from Frozen in 2014. The husband-and-wife team won again in 2018 for “Remember Me” from Coco.

Will CODA, Dune, or The Power of the Dog grab the best picture honors?

Speaking of The Power of the Dog, will Jane Campion become only the third woman to win the Oscar best director trophy after Kathryn Bigelow and Chloe Zhao? And will the film’s Ari Wegner be the first woman ever to snag the Academy’s best cinematography prize in its 94-year history?

Those questions and possible milestone moments above are among the things to look forward to in the 94th Academy Awards at the Dolby Theatre in Ovation Hollywood (formerly Hollywood & Highland).

Beyonce is confirmed to sing “Be Alive,” her nominated song from King Richard. There is buzz that the pop diva will perform live from a tennis court in Compton, California. The setting is a nod to the film, which chronicles how Venus and Serena Williams were groomed and trained as young girls in Compton by their dad, Richard (Will Smith), to become tennis champs.

Rachel Zegler, the star of Steven Spielberg’s best picture contender, West Side Story, who casually mentioned on Instagram that she was not invited to the Oscars, has been asked to be a presenter.

Film buffs are hoping to see a reunion of the cast and director of The Godfather, which celebrates its 50th anniversary this month, on the stage of the Dolby Theatre. But that’s just a wish to see Francis Ford Coppola and his actors together again – Al Pacino, Diane Keaton, James Caan, Robert Duvall, and Talia Shire. The Academy has not mentioned it.

In the best actor race, Andrew Garfield, in the running for his tour de force performance as the late Rent creator Jonathan Larson in tick, tick…BOOM!, recently bared his heart and soul in a career retrospective talk presented by Film Independent.

In the event titled An Evening With…Andrew Garfield, with the Hollywood Foreign Press Association (HFPA) as the lead sponsor, the British actor was engagingly open, candid, and emotional. Turner Classic Movies host David Karger moderated the freewheeling talk held at the Wallis Annenberg Center for the Performing Arts in Beverly Hills.

“I don’t take it lightly,” said Andrew, slim and lanky, in a light gray suit and sneakers, about the honor being given him as the night’s spotlighted talent. “I was a young actor. The idea that I would end up here…I was a 17, 18-year-old drama student in London doing Doritos commercials in Spain, thinking that was the top of my career, proudly.”

This Sunday, the eloquent Brit, who kicked off the awards season by winning the Golden Globe best actor in a motion picture – musical or comedy award last January, is up against Javier Bardem (Being the Ricardos), Benedict Cumberbatch (The Power of the Dog), Will Smith (King Richard), and Denzel Washington (The Tragedy of Macbeth).

Speaking of the Oscars, Andrew shared an anecdote involving his dad, Richard (an American; his late mom, Lynn, was from England), and his acting idol and inspiration, Mark Rylance. It was 2017 when Andrew earned his first Oscar best actor nomination for Hacksaw Ridge.

Mark had won best supporting actor the year before for Bridge of Spies.

“So, we are at a party for the Oscars the year I’m nominated,” Andrew began. “My dad knows that Mark is my guy, my hero, and my dad is a proud father to the max.”

“And Mark’s like, ‘Do I have a choice?’ And my dad’s like, ‘It’s Andrew.’ And then, ‘Oh, Andrew, wow. That’s wonderful.’ And then my dad dragged Mark over to meet me basically.”

“So, now I do have a very sweet relationship with Mark. I have to just pretend like he’s not Mark Rylance. Otherwise, I’ll fall. I’ll just dissolve.”

Andrew opened up about how he and Tobey Maguire agreed to appear with Tom Holland in the enthusiastically received appearance of the three Spideys in Spider-Man: No Way Home.

Andrew jokingly said at first, “So weird. I’m not in that film. I didn’t get a call. I don’t know anything about it.”

Then he disclosed how the casting coup was accomplished: “I really was taken aback when Amy Pascal (producer) was like, ‘I want to talk to you about something.’ And I was like, ‘Okay. I think I know what this means.’”

“Because I had heard rumors even before I had been asked about it. It was going to be three of them, blah, blah, blah, blah. I was like, ‘That’s insane. No, they would never do that.’”

“And then Amy was like, ‘We got an idea. We got it from the internet.’ No, she didn’t say that. She was like, ‘So yeah, we want to do something with the three of you. We think it’d be really powerful.’”

“I was really shocked because I’d really had my closure with it. I really, excuse me, put it to bed. And then it took a minute. But as soon as I heard that Tobey was interested, I was like, ‘Well, of course.’”

“The first time I sat with them, they pitched a moment of redemption for my Peter 3 to save Zendaya. It’s stunning because I’m all about fate and destiny. I love that as a foundation of storytelling and of living.”

“So, for me, the idea that if these two Peters, Tobey’s and my Peter, hadn’t been dropped into this alternate universe, that our little brother may have experienced the same fate that we had in different ways, losing the love of their life, and starting to go down a darker path of destruction and letting the lesser angels start to steer the ship.”

“I was like, that’s so beautiful to me, that these two had a genuine purpose in this particular universe, rather than it’s just being us showing up, getting a cheer, and then leaving. That wasn’t interesting to either me or Tobey.”

“We were like, how do we make this about brotherhood and mentorship kind of quintessentially solitudinous? Is that a word, solitudinous?”

“A quintessentially solitudinous character, essentially having thematically to deal with a feeling of being totally alone in the universe, suddenly realizing that he is never alone is so f***ing beautiful and so universal for all of us. So yeah, there were just multiple reasons to do it.”

“And I love all the films. I love Jon Watts. I love what Kevin Feige does with that universe. And Tom is just so heartfelt, funny, and just the perfect Peter Parker. Strange that two Brits have…. It’s weird.”

The talk was paused to show the “Why” song night scene in tick, tick…BOOM! where Andrew, as Jonathan, by himself in a big amphitheater, played the piano and grippingly sang about his friendship with Michael (Robin de Jesus) who was diagnosed as HIV-positive, and the intertwined issues of whether he has what it takes to make it in musical theater and if all that sacrifice is worth the struggles.

As Andrew watched this scene in which he cried, he also wiped away tears as he sat looking up the screen. He has said in interviews that the passing of his mom after a long battle with illness right before he began filming tick, tick…BOOM! with director Lin Manuel-Miranda brought him to such an emotional state.

“I love that,” Andrew said when the talk resumed. “First of all, watching that makes you understand why Myron (Kerstein) and Andrew (Weisblum), the two editors of this movie, got an Oscar nomination, because the ending is spectacular.”

“But when I’m watching that and looking at the different camera angles, closeups, further away shots, this was obviously an overnight, maybe it was more than one overnight…. I don’t remember but how do you summon that emotion for as many takes, as many angles and as many shots as it required?”

Brushing away a tear again, Andrew added, “God, so I cried watching that, not because of what I’m doing, but because it’s…oh, f***. I’m singing for my mother in it. I’m just so grateful that I got to do that and I got to share that with people who watch the film.”

“It’s a bit much because that’s the biggest loss I’ve ever experienced in my life, trying to deal with it, to understand how to move through it and move on with it.”

“And the kind of process that Jonathan is going through in that scene is, how do I meet this loss of my friend? And so many people around me and how do I go on doing the thing that I think I’m supposed to do, which is write music? Is that enough?”

“It’s short and sacred, this life, and we’re here and then we’re not. And how do we know what we’re supposed to be doing? And am I cut out for it? And what’s the way I want to spend my time.”

On losing his mom, Andrew shared, “She didn’t pass until just before we started shooting (tick, tick…BOOM!). While I was shooting The Eyes of Tammy Faye, they were very gracious. Jessica (Chastain) and everyone on that set.”

“They shut down production for 10 days and two weeks. I got to be with my mom for the last 10 days of her life. The best time, the best 10 days of my life, and the privilege of being with her as she passed.”

“I finished Tammy Faye and then started tick, tick… BOOM! early 2020. And then the pandemic. I had lots of time to myself alone. I got to really do the proper grieving with her.”

“It was a beautiful, strange thing that happened in that solitude that I got to really just dig in and really be with her as she passed.”

On whether anything in his career prepared him to sing and dance in the film, Andrew quipped, “I’ve always been like, ‘F***, I want to be Justin Timberlake.’ I do. I want to be Fred Astaire. I hadn’t had the courage or the time, I suppose.”

“But then Lin gave me the courage and time. Lin said, ‘Take a year. And here’s some courage and give it a go.’ And thank God he did because it’s one of the most soul-healing experiences of my life to play Jonathan Larson with this incredible company of people.” – Rappler.com