‘The Fabelmans,’ ‘The Banshees of Inisherin’ win top awards in Golden Globes 2023 Director Martin McDonagh, cast members and crew of "The Banshees of Inisherin" pose with their award for Best Motion Picture in a Musical or Comedy, at the 80th Annual Golden Globe Awards in Beverly Hills, California, U.S., January 10, 2023.

LOS ANGELES, USA –  Steven Spielberg’s The Fabelmans and dark comedy The Banshees of Inisherin landed the top movie awards at the Golden Globes on Tuesday, January 10, as Hollywood returned to a show that had been knocked off television by scandal.

The Fabelmans a coming-of-age story based on Spielberg’s teen years, was named best movie drama at the star-studded ceremony. Banshees of Inisherin, the story of feuding friends on an Irish island, won best movie musical or comedy.

The awards are likely to give both movies a boost on the road to the Academy Awards in March.

Celebrities and broadcaster NBC abandoned the 2022 Globes because of ethical lapses at the Hollywood Foreign Press Association (HFPA), the group that hands out the awards.

A larger, more diverse membership and other changes by the HFPA persuaded many of the biggest movie and TV stars to support this year’s ceremony, which provides publicity for winners and nominees and often boosts their chances at the Oscars.

The show unfolded largely as it had in years past, except for a biting monologue from comedian and host Jerrod Carmichael who opened the show joking, “I’m here because I’m black.”

“One day you’re making mint tea at home. The next day you’re invited to be the Black face of an embattled white organization,” he said at the ceremony, which was broadcast live on Comcast Corp’s NBC network and streamed on Peacock.

Roughly 200 journalists and others from the international film industry voted on this year’s Globes. Among those voters, nearly 52% are racially and ethnically diverse, including 10% who are Black, according to the HFPA. – Rappler.com 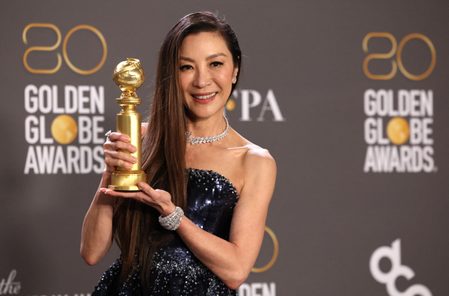