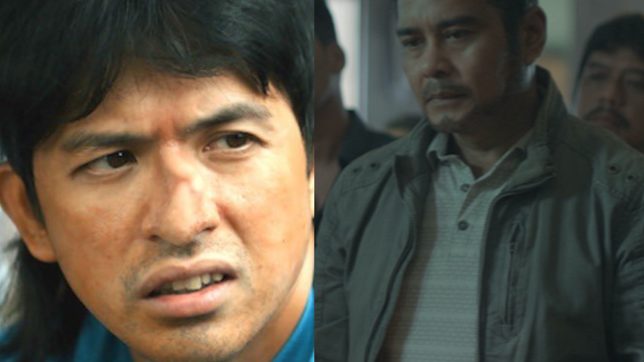 BEST ACTOR. Dennis Trillo and John Arcilla star in 'On The Job: The Missing 8.'

Facebook Twitter Copy URL
Copied
'If we could give you a joint award, we would give it to both of you,' says jury member Chloé Zhao

Dennis Trillo was supposed to tie with John Arcilla for the Volpi Cup for Best Actor award at the 78th Venice International Film Festival, according to jury member Chloé Zhao.

In a video released by producer Quark Henares on Wednesday, September 15, the Nomadland director praised Trillo for his performance in On The Job: The Missing 8.

“If we could give you a joint award, we would give it to both of you. But we weren’t allowed to,” Zhao said in the clip.

Henares added that Zhao did research on Trillo thinking that he was a real prisoner, referring to Trillo’s character as the hitman-inmate Roman Rubio.

“She said she Googled him because she thought he was a real prisoner only to find out he was a matinee idol of some sort,” he said.

Aside from Zhao, several jury members also applauded Trillo. In a separate tweet from Henares, Trillo can be seen talking to Cynthia Erivo, Sarah Gadon, and the jury head, Parasite director Bong Joon-ho, who all told the actor that he was “excellent.”

In an Instagram post on Wednesday, Trillo said that the positive feedback was enough for him and that Arcilla, who won the award, was more than deserving.

Trillo then addressed co-star Arcilla: “Ikaw talaga ang pinakamagaling kahit noon pa (You are really the best, even before). [The] Volpi Cup is long overdue for you.”

Arcilla made history on Sunday, September 12, as the first Filipino actor to win the prestigious Volpi Cup for Best Actor Award at the Venice Film Festival. He was cited for his portrayal of Sisoy Salas, a seasoned radio journalist.

Aside from the lead actors’ performances, Henares also shared that Bong commended the film and director Erik Matti.

“He asked Erik questions about [the] soundtrack, [the locations], the number of days, the budget,” he wrote alongside a video of the On The Job: Missing 8 group sitting with Bong during the dinner party. [READ: On the Job: The Missing 8 filmmakers make strong presence in Venice]

Henares added, “Every time we’d bring up his films or the other festival films, he’d politely answer and turn the topic back to On The Job. He seemed to really love the film. He left after a while to do jury president duties but stopped by before leaving to give [Erik Matti] a hug.”

Inspired by true events, On The Job: The Missing 8 follows Sisoy and Roman as they negotiate and question their loyalty to a well-known politician, especially after eight people go missing. [READ: ‘On the Job: The Missing 8’ review: An unlikely ghost story]

On The Job: The Series available for streaming via HBO Go.  – Rappler.com