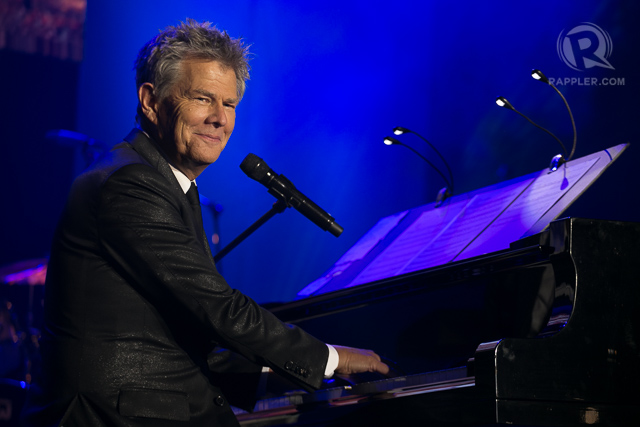 MANILA, Philippines – True to his promise to give the audience a fun night, international producer and songwriter David Foster brought the house down with his songs peformed by top artists at the Araneta Coliseum Tuesday, August 18 for HitMan David Foster and Friends concert.

David’s guests – Ruben Studdard, Natalie Cole, Boyz II Men, and Charice performed many of his greatest hits including a surprise duet and impromptu singing from the audience.

David kicked off the show with the theme song of the 1988 Winter Olympics and from there it was all about the music. 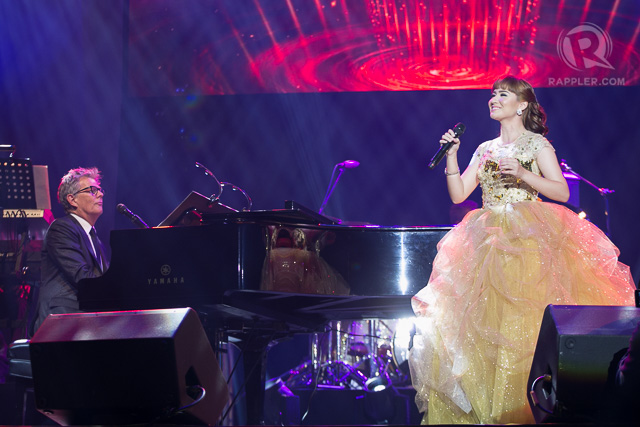 We all know Gerphil Flores as David’s Golden Buzzer singer on Asia’s Got Talent. She performed “The Impossible Dream.” 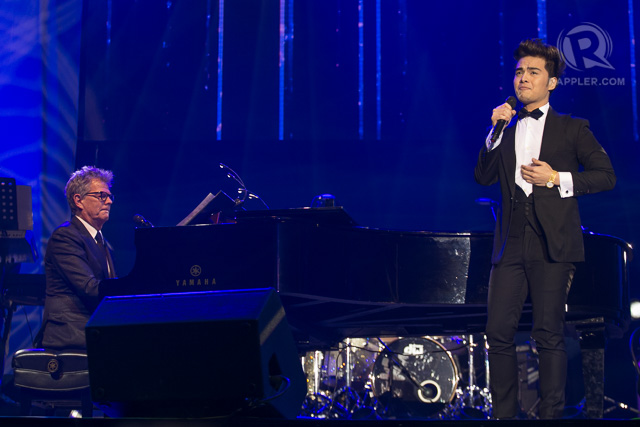 Mark Mabasa is a new talent David found a few years ago. In between songs, Mark shared that he was from Tondo and talked about how he got into singing. He performed 4 songs – “See You Again,” “The Last Time,” “Forever,” and John Legend’s “All of Me.”

David pics viewers to singDavid Foster is known for really interacting with the audience in his show and picking viewers to sing with him. For the Manila concert, he chose Vic Robinson, Yumi Lacsamana and The Voice of the Philippines 2 winner Jason Dy to sing onstage. (WATCH: David Foster picks Pinoy singers to perform at PH concert) 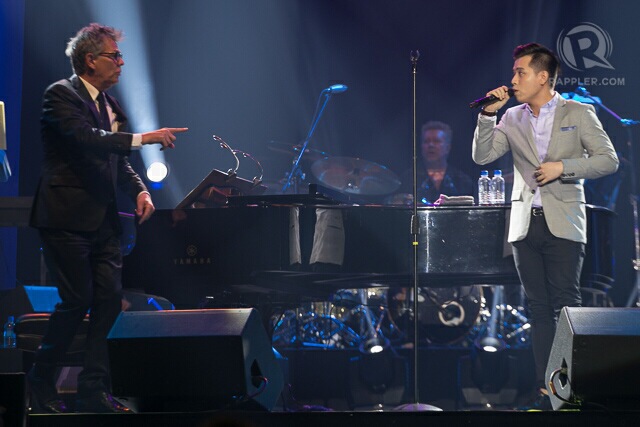 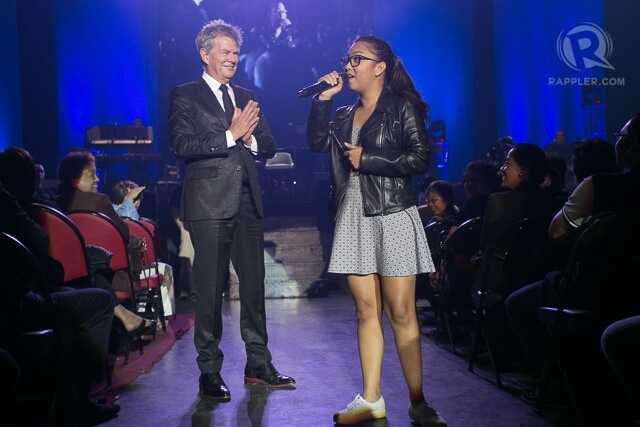 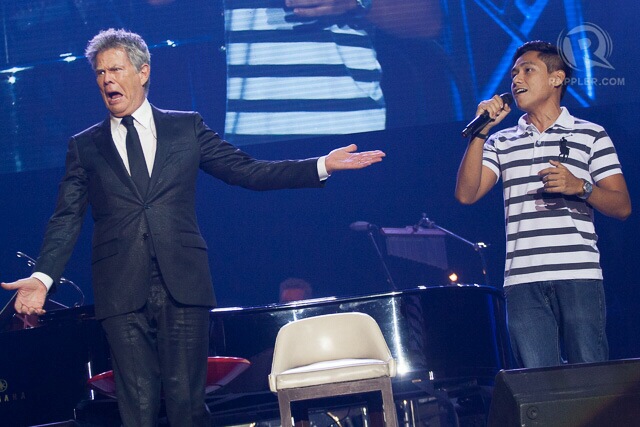 Vic performed Journey’s “Faithfully,” while Yumi rendered her version of Celine Dion’s classic “All By Myself.” Jason joined David onstage to sing Whitney Houston’s “I Have Nothing.” 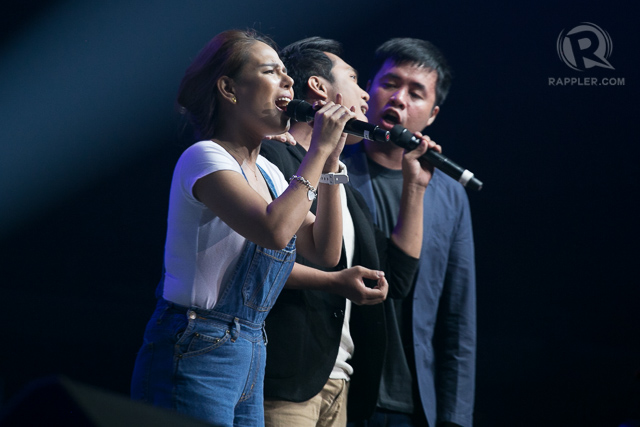 Unforgettable
Natalie Cole performed the classic “Miss You Like Crazy.” But fans were especially waiting for “Unforgettable,” which her dad, the great Nat King Cole, famously recorded in 1951. Natalie performed the “duet” through the magic of technology. 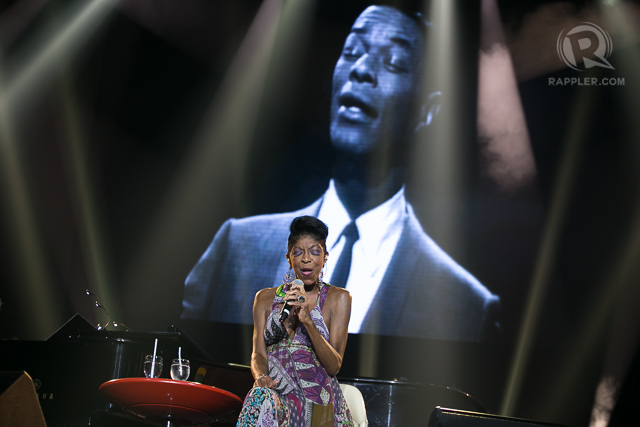 According to Natalie, the song is very special for her because her father was very influential in her career. David commented that if her father were alive, he would have been happy for her. Natalie also performed “This Will Be (An Everlasting Love).”

Robert in the yellow shirt

In between performances, David would always call on a member of the audience named Robert, who was seated in front. During the performance of Ruben Studdard, David shared that Ruben is known for making up songs on the spot. He then asked Ruben to sing with Vic, Yumi and Jason, a song Ruben called “Robert in the yellow shirt,” to everyone’s amusement. 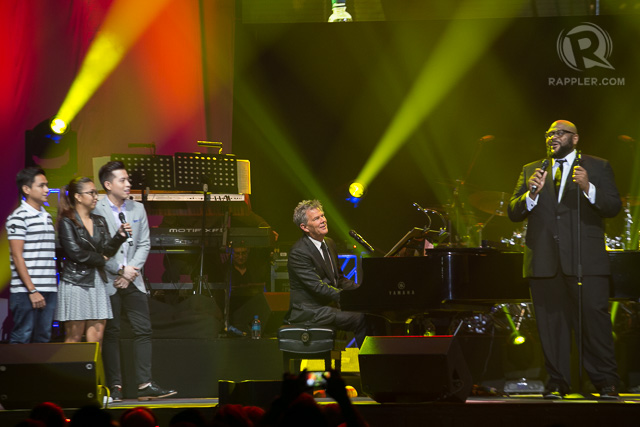 Ruben sings Robert with yellow shirt with Jason and the 2 singers pic.twitter.com/kOHQenRdCD

Ruben also sang tunes like “I Swear” from All 4 One and Michael Buble’s “Home,” which David told the audience that his daughter Aimee co-wrote with the Canadian singer. 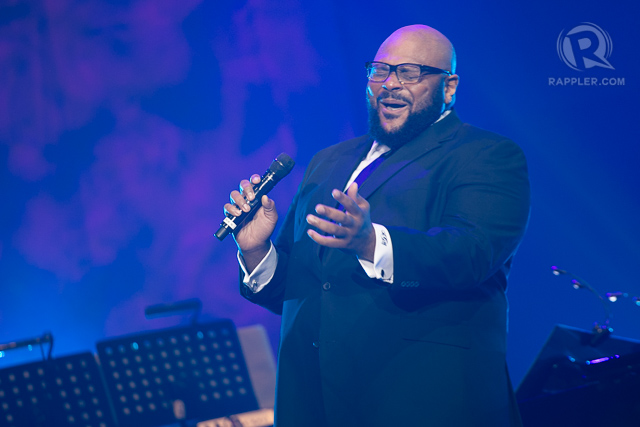 David also shared his story with the audience, even talking about his 3 previous marriages. He said that his first wife would get a house in British Columbia, his second wife a house in the US and his third wife another property in Beverly Hills. He would perform on the piano songs such as “After the Love Has Gone,” “Hard to Say I’m Sorry,” and “I Have Nothing” to express what he has been through.

In one part of the show, David once again asked one of the cameramen to sing a song, with him doing the recording. David said that he was amazed that all Filipinos can sing, joking there must be something in the water. 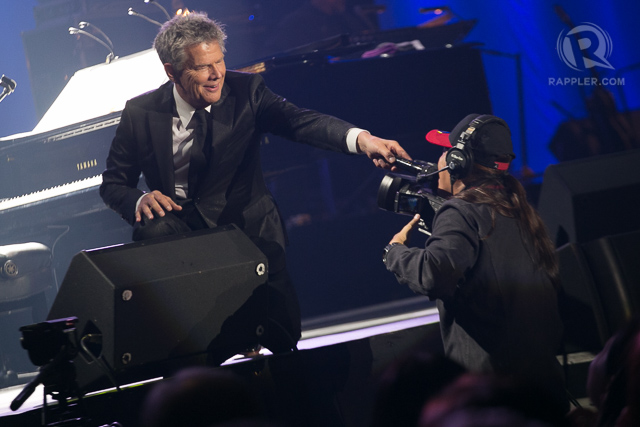 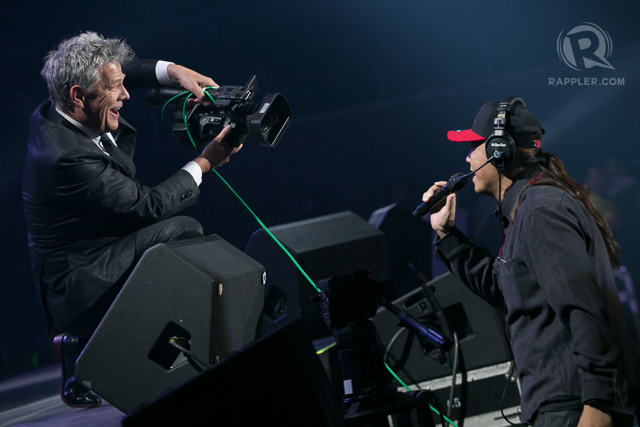 CHARICE!
When Charice came out onstage, the whole crowd cheered. She performed “Through the Fire,” and completely slayed the very high note near the end. She thanked David for giving her another opportunity to sing with him. 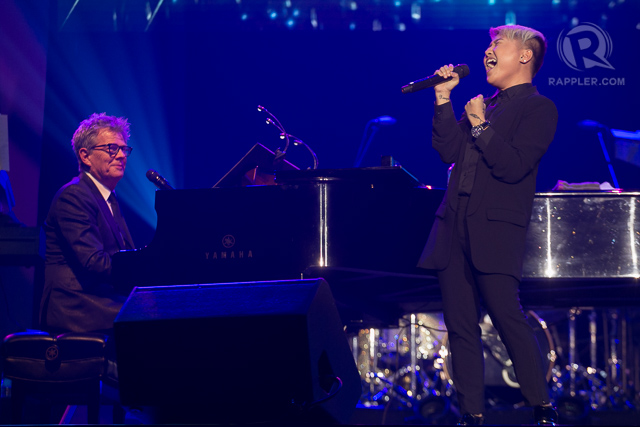 Charice also performed “Lay Me Down” which she sang at Asia’s Got Talent as well as “Superstar” with Ruben, a first for her in the concert. But it was the song “Bukas Na Lang Kita Mamahalin” where the whole crowd gave her a standing ovation. Charice said she was glad David let her perform the song. (WATCH: Charice Pempengco performs with David Foster at PH concert) 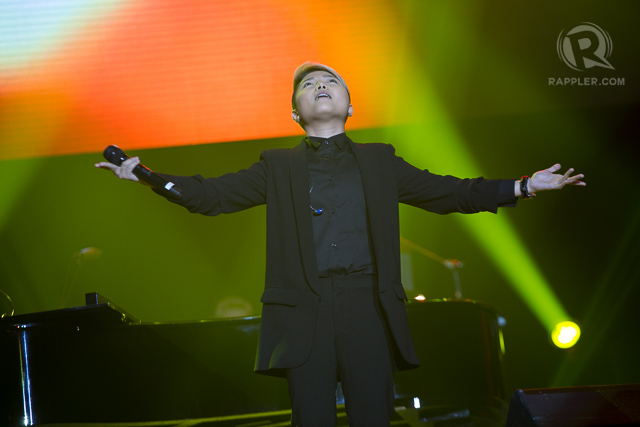 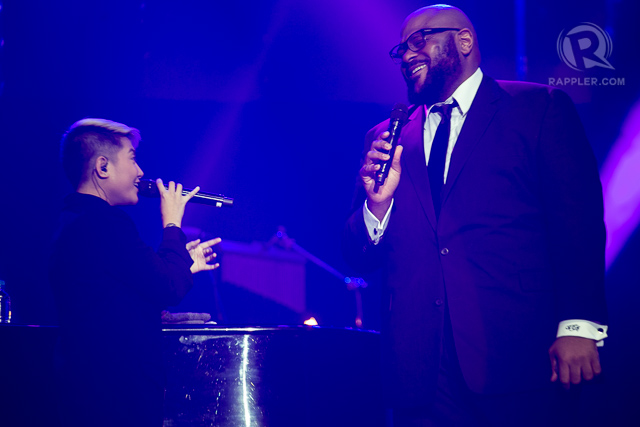 The audience got up on their feet when Boyz II Men came out singing “Motown Philly.” Known for their sweet love songs, the boys said they were happy to be back in Manila once again.  During the song “I’ll Make Love to You,” the boys went down to the crowd and gave viewers roses. 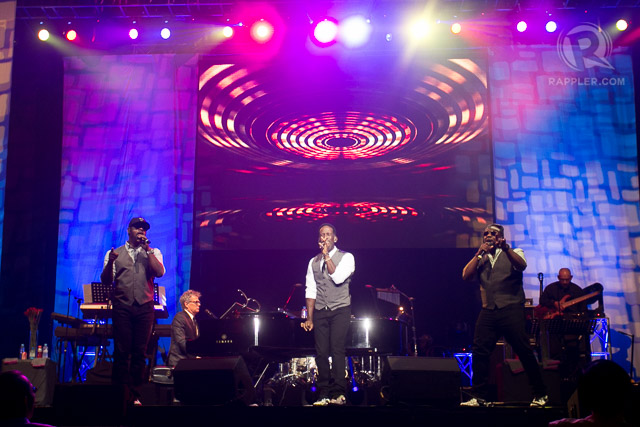 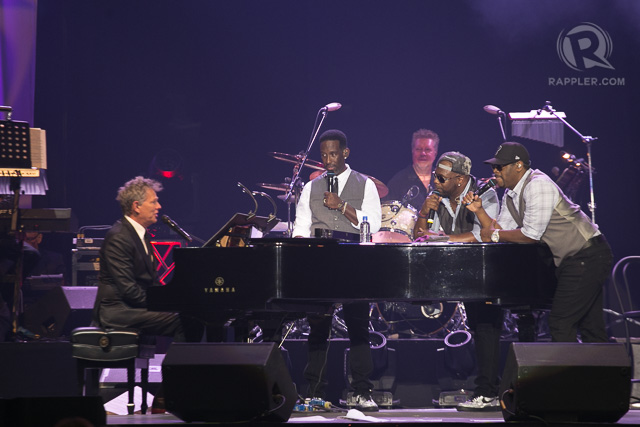 The boys were also said to be surprised to find out that some of the songs from Earth, Wind and Fire and other songs they look up were also produced or composed by David.
Rousing finale
As the show draws to a close, David once again thanked the Filipino audience. He said he put something special and launched to the tune of the Beatles “Hey Jude.” Gerphil, Mark, Charice, Ruben and Boyz II Men went onstage. 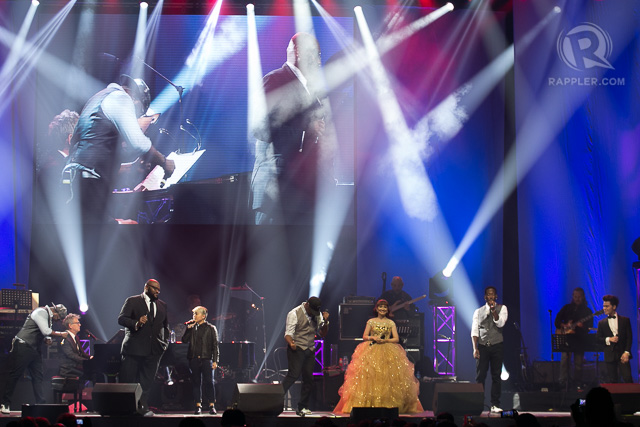 With the crowd asking for an encore, David obliged and went on to perform “St Elmo’s Fire.”
Were you at the concert? What was your favorite part? Let us know in the comments below. – Rappler.com
All photos by Manman Dejeto/Rappler