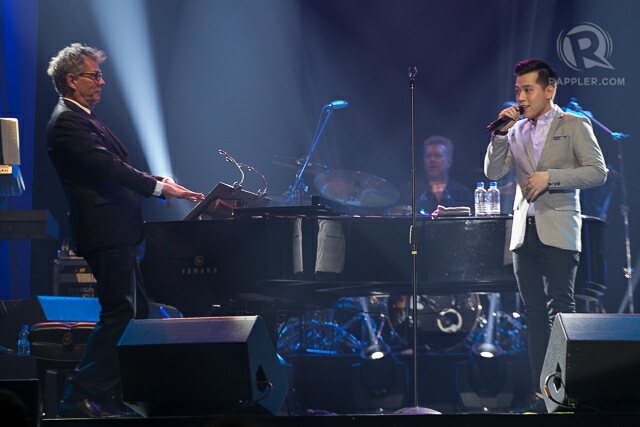 MANILA, Philippines – What would you do if the “HitMan” himself, David Foster, asked you to sing on his stage? Sing your heart out, of course. David asked lucky Pinoy audience members to get up onstage and sing during his Manila concert Tuesday, August 18, and they all seized the moment. (READ: Charice on reunion with David Foster, advice for ‘Asia’s Got Talent’ finalists)

Among those selected was The Voice of the Philippines season 2 winner Jason Dy, who sang “I Have Nothing.” (Read and watch: Charice Pempengco performs with David Foster at PH concert)

Thank you so much Mr. @davidfoster for the once in a lifetime opportunity. When he announced that he'd be picking random people from the audience to sing, albeit very nervous, I didn't think twice about grabbing the chance to sing for the one and only Hitman. The man behind so many iconic songs we all know and love. I am still on cloud nine. I will treasure this night for the rest of my life. Thank you Lord for this wonderful blessing. Thank you @mca_music for the video!

There are no words to describe this night. Thank you so much Mr. David Foster. I will never forget this.

David also chose theater actor Vic Robinson to sing. Here he is performing a stirring cover of “Faithfully” by Journey:

David just got someone from the audience to perform on stage. pic.twitter.com/46gEvS4bQC

“It was really surreal because I never imagined [I would] be called onstage to actually sing inside the Big Dome for the first time in my life. It’s always been my dream. It’s just magical for me to be up there with Mr. David Foster himself,” Vic told Rappler after the show.

Vic posted this later on:

Singer-songwriter Yumi Lacsamana, 26, from Pasig performed “All By Myself” – watch David’s reaction as she hits that beautiful high note:

Another one from the audience Yumi performs " All By Myself." pic.twitter.com/DSppXqfdzz

“It’s really overwhelming and unexpected…he’s just too… charming, to do everything like that and just ask people to sing the songs,” she said, adding that she had met him earlier backstage with the great musical icon, Filipino composer Ryan Cayabyab.

Yumi and Thyro Alfaro won the PhilPop 2015 competition for their song “Triangulo.”

Ruben sings Robert with yellow shirt with Jason and the 2 singers pic.twitter.com/kOHQenRdCD

In this concert, David also performed with Asia’s Got Talent finalist Gerphil Flores, as well as Mark Mabasa. Watch the clips below:

Mark performing "All of Me." pic.twitter.com/u3mQprOE9r

David also chose 3 others, Lillibeth, JV, and Lucky to perform “The Prayer” on the spot.

Jason previously posted a photo on Instagram of him meeting David Foster, with Charice:

Met the one and only Hitman himself, @davidfoster! So honored to have met the man behind some of the biggest and most iconic songs ever! Nice seeing you as well, @supercharice! I'm jealous of those Composit 1.0 glasses! Super cool!  Excited to watch the David Foster and Friends concert tomorrow at the Araneta Coliseum!

Earlier at the press conference for the concert, David said that he appreciated Filipino talents very much.

“I love coming to the Philippines for many many reasons, the biggest reason is, of all the countries that I have ever been in the world, the Filipinos are the biggest music-lovers I’ve ever met,” he said.

He also emphasized the value of good old-fashioned hard work for young, aspiring singers. “You need to sing in the bars, train like the way Natalie did. The way Ruben did, the way Charice did… I don’t how you’re going to be a superstar without knowing how it feels to be hated,” he added.