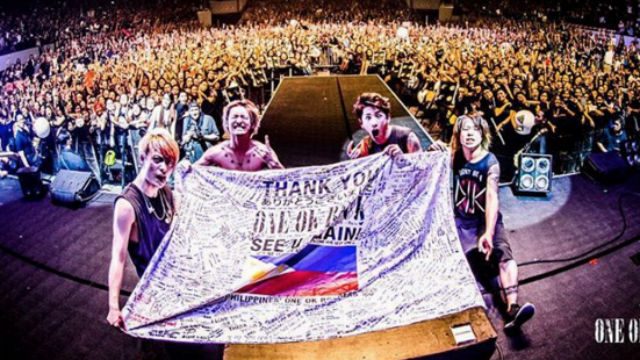 MANILA, Philippines – It seemed like Japanese band One OK Rock had fun at their Manila concert, as Filipino fans sang along to their Japanese lyrics and lit up the arena with cellphone lights during one of their ballads. (WATCH: One OK Rock thrills Manila fans)

The crowd matched the band’s high-energy performance too. Frontman Taka Moriuchi interacted with them before the band wrapped up the Philippine stop of their 2016 “35xxxv” Asia Tour with a couple of encore songs. (READ: One OK Rock: Their time has come)

Just because it’s over though, doesn’t mean that the band and the fans can’t relive the night.

After their concert on Tuesday, January 19, at the Mall of Asia Arena, One OK Rock’s band members took to Instagram to post photos from their night in Manila.

Check out the beautiful shots of the band and the crowd from the stage below:

Meanwhile, Journey lead singer Arnel Pineda  was in the crowd during the concert, and met the band in person too.

Did you catch One OK Rock live in Manila on January 19? Tell us about your concert experience in the comments! – Rappler.com