MANILA, Philippines – Your favorite artists will be performing in Metro Manila, Baguio, and Palawan on 3 different days for Fête de la Musique 2017! 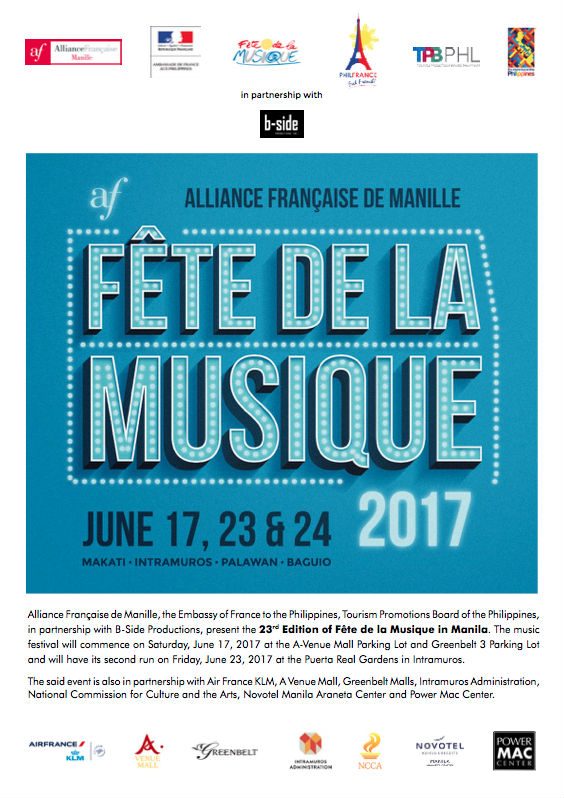 Artists like Kjwan, Ang Bandang Shirley, Taken by Cars, Apartel, Autotelic, Sud, Jensen and the Flips, Joey Ayala, and many more are set to be part of the music festival this year.

Now on its 23rd year, Fête de la Musique will be held in Baguio and Palawan aside from Metro Manila for the first time. Both festivals outside the metro will be held on June 24.

The other main stage will be in Intramuros, Manila on June 23.

According to an announcement on Alliance Française de Manille’s Facebook page, the Makati main stages, which were supposed to be at Greenbelt and A-Venue, have been canceled due to security concerns.

You can still visit the pocket stages in Makati, though, which will be open on June 17.

Here’s a look at the pocket and main stages at Fête de la Musique 2017! No other details have been given for the Baguio stage yet.

Will you be attending Fête de la Musique this year? Which stage are you planning to visit? Don’t forget to share your experience on X! – Rappler.com