The clapback: 10 music feuds that hit more than just the charts MANILA, Philippines – Music feuds have probably been around since before the time Mozart and Salieri, but historians only have letters and rare written accounts to go by.

With the boom of social media, the public is now privy to pop star clashes in real time.  And because the world is watching, salvos between adversaries have become nastier, funnier, more creative, and more elegant.  Here are 10 of the most riveting online musical feuds, digs, shade throwing and clap backs of recent years. Fifth Harmony were working on their third studio album when Camila Cabello left the five piece in December 2016 reportedly without first informing her group mates.  Much blame was thrown between camps but it’s the remaining four who currently have the advantage. For the recently concluded 2017 MTV Video Music Awards, Fifth Harmony fans were surprised to see five figures in silhouette on stage at the beginning of the performance.  As the lights go up it is revealed that the fifth figure is in fact a dummy… that the ladies proceeded to throw off stage in a stunt. 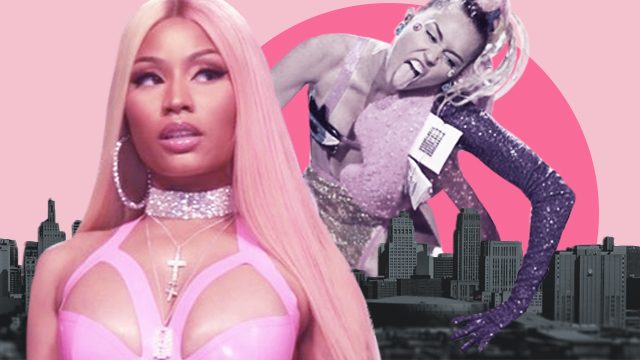 Nicki Minaj was miffed that her video “Anaconda” wasn’t getting enough love from the 2015 VMAs. Minaj complains on Twitter how “when a naked white girl breaks a Vivo record she gets nominated”. She initially gets into a back and forth with Taylor Swift, but Swift ends up apologizing saying she mistakenly thought the dig was for her.  It was Miley Cyrus though that gets the brunt of Minaj’s bile. Miley says in a New York Times interview days before the VMAs that she didn’t respect Minaj’s statement because of the anger that came with it. Thus Minaj’s famous “Miley, what’s good?” glare-jab from the VMA stage.

3. THE CHAINSMOKERS VS. LADY GAGA Lady Gaga releases the song “Perfect Illusion” in 2016.  The lovely boys from The Chainsmokers weigh in with the tweet  “It sucks.”  Gaga responds with “Maybe you guys’ll like this better” with a link for the song “A-YO” which includes the lyrics “I can’t wait to smoke them all, whole pack like Marlboro/Blow it in your face”. In a German TV interview in 2000, Mariah Carey is asked to comment on fellow female pop stars. When Jennifer Lopez’s name comes up she answers, “I don’t know her.” Carey now has a meme as popular as her Christmas song. Lopez is low key about the whole thing even when asked about it in 2014 on US TV.  Later fans pounce on a shot of her during the 2015 Billboard Music Awards scrolling on her phone during a Carey performance. Along the way Brandy and Demi Lovato join the fray because either they’re loyal or need the publicity. This just goes on because that’s what happens when you don’t know each other. Recently JLo is asked once again about the quip and slips in a good one.  “She’s just forgetful I guess.” Not all feuds are forever. Nineties Britpop icons Blur and Oasis were at it for almost twenty years trying to outchart each other, releasing singles on the same day, and slagging each other off with gems like “I hate that Alex and Damon, I hope they catch AIDS and die.” Noel Gallagher shot off that quote. He quit Oasis in 2009. In 2013 he joined Damon Albarn and Graham Coxon onstage at a benefit concert for Teenage Cancer Trust in England where they performed Blur’s “Tender” (with no less than Paul Weller on drums). These days it’s Noel and his brother Liam who are trading barbs, insults, libel suits, and twitter photos with the caption “POTATO”.

6.  RADIOHEAD VS. THE BOYCOTT DIVESTMENT SANCTIONS BDS leads a campaign calling on Radiohead to boycott a concert in Israel. Former Pink Floyd frontman Roger Waters and British film director Ken Loach take to social media to pressure Thom Yorke and the band to reconsider.  Many netizens join the call, accusing Yorke of apartheid and ignorance over the Israeli/Palestine conflict.  In an online discussion with Loach, Yorke says playing in a country does not mean endorsing its government; otherwise they would not be playing America (because of Trump). Yorke adds “Music, art and academia is about crossing borders not building them, about open minds, not closed ones, about shared humanity, dialogue and freedom of expression. I hope that makes it clear, Ken.”

7. RIHANNA  VS. TROLLS (FAMOUS OR OTHERWISE) Rihanna will not hesitate to demolish anybody who decides to take up beef with her and she does it with fearless flair and a sense of humor you know is inappropriate to laugh with but you can’t help it anyway.  She rarely starts things but she has had the last say with fans, haters, blogs, paparazzi, CBS, Kendall Jenner, Ciara, Diplo, MTV, Beyoncé, Amanda Bynes, Charlie Sheen, and Piers Morgan. Courtney was married to Kurt Cobain who was in a band with Dave and Krist. They all basically fought over the rights to Nirvana’s music. Over the years Courtney has called the Foo Fighters gay, and accused Grohl of trying to hook up with Cobain’s daughter Frances Bean. They finally end the feud at the Rock and Roll Hall of Fame when Nirvana is inducted in 2014. Courtney and Dave hug onstage and Courtney tweets that this is “the most magical part of the evening. Thank you Dave, love you. I know this made him smile up there. In 2008 Taylor and Katy are thick as thieves on Twitter and at the VMAs (where everything happens for some reason). In 2009 Taylor likes Katy so much she gives her a lock of her blond hair, a bunch of which she keeps in ribbons in her bag at the Grammys (no, you’re weird).  Katy also defends Taylor in the infamous Kanye stage take over. By 2011 though things begin to get chilly, and in 2012 Katy starts dating Taylor’s ex, John Mayer. By 2014 Taylor reveals, “Bad Blood” is about another female singer “who tried to sabotage an entire arena tour” by hiring dancers out from under her. Katy calls Taylor Regina George (head Mean Girl), releases a scent called Mad Love and just last year uploaded footage of herself dancing to Kanye West’s “Famous.” Katy then releases “Swish Swish,” which is supposed to be her answer to “Bad Blood.” On the day that Katy releases her latest album WITNESS, Taylor returns her whole catalogue to online streaming services like Spotify. The two have recently wished “God bless you on your journey” to one another on separate occasions, Perry adding she wants to end the feud.  She is also featured in a new single with Taylor’s ex Calvin Harris. Taylor might be slightly busy with number ten so we’ll see how this goes.

The two had an initial encounter at the 2009 VMAs when Kanye jumped onstage to interrupt a 19-year-old Taylor during her acceptance speech for Best Female Video.  Apologies are offered and withdrawn over the years but by 2015 the two are good again, collabs are being teased and Swift awards Kanye with the Video Vanguard at that years VMAs. Taylor even offers to be Kanye’s running mate for his Presidential run.  All things are heading towards world domination until Kanye releases “Famous” in February 2016. The song contains the lyrics “I feel like me and Taylor might still have sex / Why? I made that bitch famous.” Kanye claims Taylor was advised through a phone call and that she thought it was funny and gave her blessings. Taylor claims that she was never played the track and that the lyrics are misogynistic. In her Album of the Year speech at the Grammys she takes another dig at Kanye without naming him, while characterizing herself as a strong, put upon woman.  In June 2016 Kim Kardashian West reveals in a GQ interview that there is footage of Kanye’s call to Taylor and in July she uploads the secret recording on her new Snapchat account. A little over a year after Kim’s takedown Taylor is back with a new single and a video “Look What You Made Me Do”.  The Wests say they are over the feud but seems Taylor is gearing up for another season of the Taylor/Kanye Show with the November release of her album REPUTATION.  – Rappler.com