MANILA, Philippines – Lights, music, and fans filled up the Kia Theatre on December 1, 2017 as Sandara Park reclaimed her rightful place on the stage in one-night only mini-concert, Penshoppe Presents: Dara.

Since her debut on Philippine television in the early ‘00s by way of the first iteration of Star Circle Quest, Sandara has enjoyed a highly successful career in the country, both in film and music. Over the decades she’s branched out and launched an equally successful presence in South Korea as an actress, as well as a singer in the now-defunct, legendary KPop quartet, 2ne1. 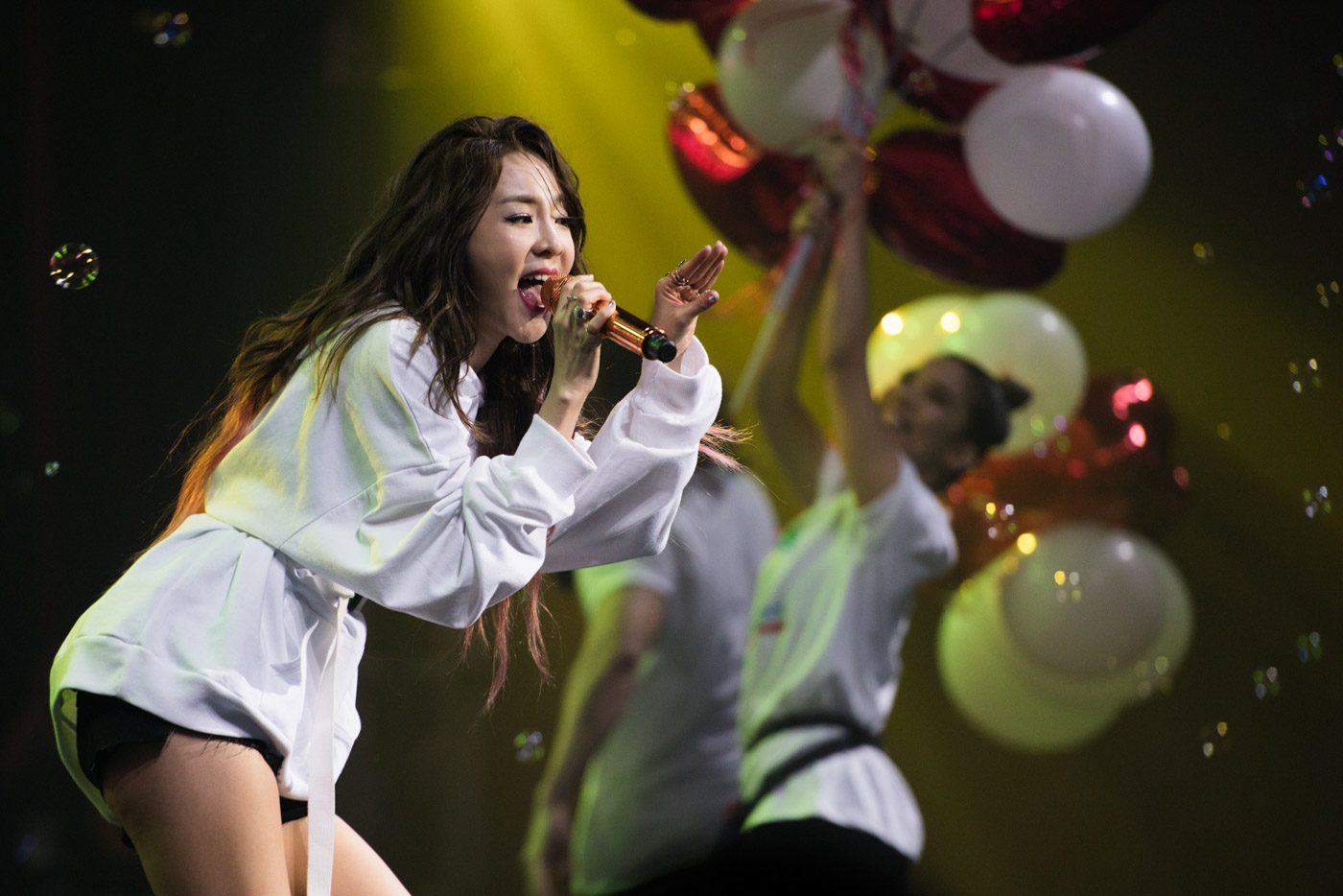 It’s difficult to imagine that the bubbly, fresh-faced girl who’s graced the small and silver screens – as well as multiple stages around the world – has recently turned 33, but Sandara proves that age is nothing but a number when you’ve got the personality of the Pambansang KrungKrung ng Pilipinas and the larger-than-life presence of KPop idol Dara – not to mention flawless skin that sets beauty trends. Known for her youthful looks as well as her edgy and daring sense of fashion (can anyone forget her side-shaved hairstyle in 2012, or that gravity-defying ponytail in 2009’s “Lollipop” music video?), it’s no wonder that she’s been an international ambassador for global fashion brand Penshoppe since 2015. Two years later, Sandara proves that she’s still every bit as iconic as she takes the stage to electric performances, and that her fanbase, lovingly dubbed Blackjacks, are as supportive as ever. 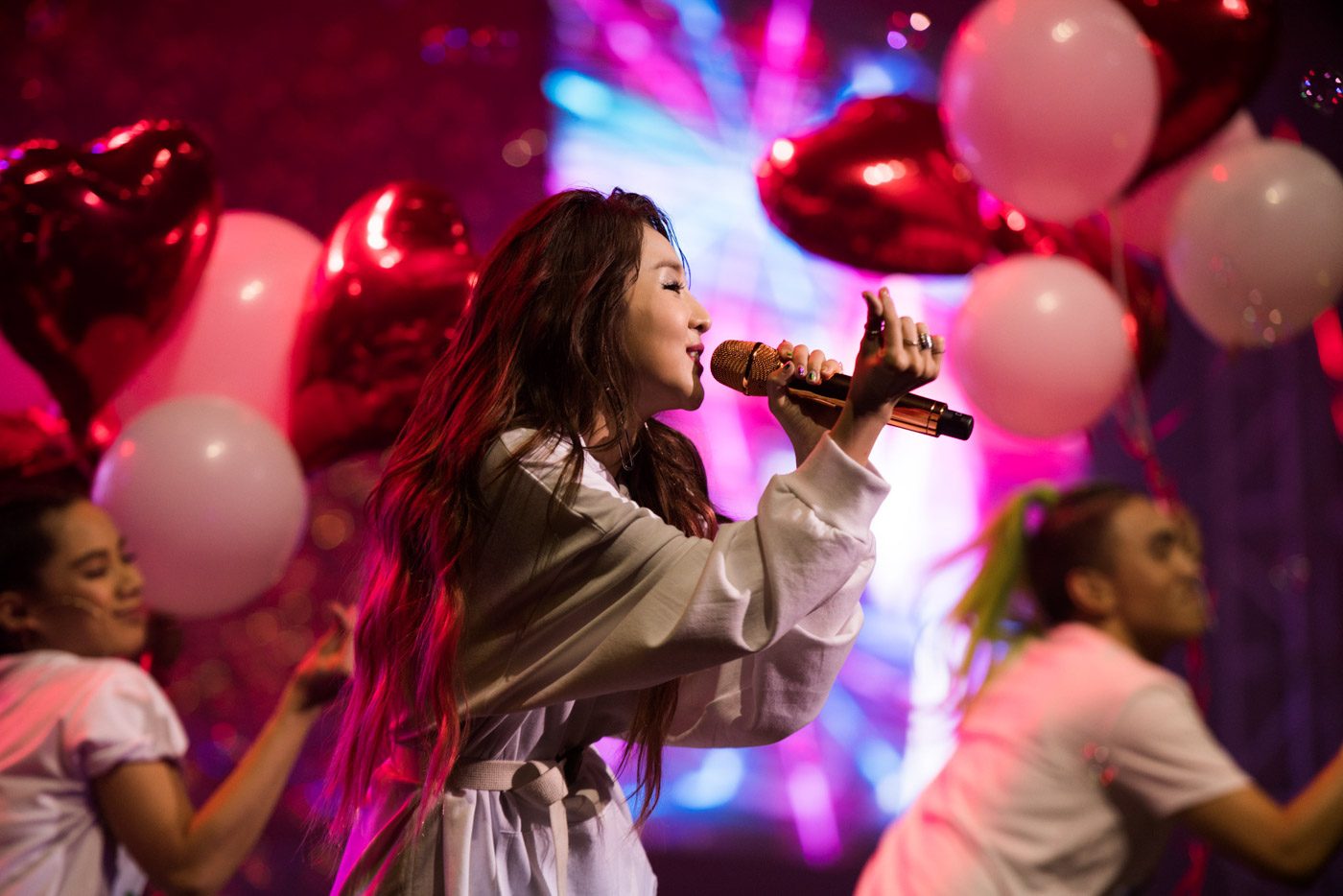 Garbed in elevated streetwear (thigh-high black boots, a tastefully deconstructed red jacket over a black top; a stylishly ripped white shirt over white long-sleeves cinched at the waist with a white belt; and later a white and blue striped polo shirt with fishnets and paired with adorable Mary Jane heels), Sandara wowed the intimate audience with high-energy renditions of well-known 2ne1 songs like “Fire,” “I am the best,” and “Go Away,” as well as the highly emotional “It Hurts.” The crowd was a veritable sea of her former group’s lightsticks, the lyrics to all the songs echoed back despite being in Korean—proof positive that KPop is indeed strong in the Philippines. Accompanied by a live band, with an opening act consisting of  Keiko Necesario, Hashtags’ Ronnie Alonte and fellow Club Penshoppe member Emilio Perez, this was not your usual mini-concert. Unlike other performers, Sandara was unafraid to sit down and get intimate with her audience, mentioning how heartbroken she still is over 2ne1 disbanding in November 2016, as well as how much she misses her bandmates. She shared her fears that, despite being the one to ask Penshoppe if she could stage the mini-concert out of her love for singing and dancing, she would not be able to fill the venue – a fear that was clearly groundless, given the overwhelming support she received. Echoing Penshoppe’s branding, she enthuses that “different is good” and that she was glad she took on the challenge, taking the time to thank the people who made the evening possible like her GForce back-up dancers, even pulling her manager onto the stage to thank the crowd for coming. KPop fanservice is indeed a sight to behold, with members of the audience flying in from different countries like Singapore for the one-night only show. A hundred lucky fans, chosen by raffle, were also treated to a special meet-and-greet after the mini-concert, granting them the unique opportunity to have their photos taken with Sandara on stage. “Hindi na ako krungkrung, nagmature na ako! (I am no longer crazy, I have matured!)” Sandara teases – but we all know it’s an act. Decades into her career and it’s clear from her level of performance and the multi-faceted nature of her talent and personality that she’s just getting started, leaving fans eagerly awaiting what she has in store for them next. – Rappler.com