‘Witness’: Katy Perry’s return to Manila is out of this world MANILA, Philippines — It used to be that getting ready for a Katy Perry concert was as simple and straight-forward as donning a pair of cat (or animal of choice) ears or copping a vibrant wig with straight-cut bangs. Combine this with the cutest, most colorful and twee outfit you owned, and you were pretty much ready to go.

But in the way of all true movers and shakers in the entertainment industry, Katy Perry’s aesthetic has been refined over the years, moving from technicolor lollipop fantasies to, well, something quite out of this world. While she has always been quite the innovator in terms of style and fashion, her latest album Witness marks a great leap forward for her musically, individually, and as an icon.

The proof is in her 4th visit to the Philippines for Witness: The Tour at the Mall of Asia Arena on April 2.

Because while kitschy, quirky costumes and off-kilter music videos may be her signature as an artist, her fifth studio album is worlds away. In Witness, she tones down the hook-laden tunes of her past incarnations to make room for more ballads, delving deeper into themes of self-empowerment that her fourth album, Prism, seems to only have scratched the surface of.

MOA Arena was filled to the brim with fans, lovingly dubbed KatyCats, adorned in everything from the iconic cat ears and colorful wigs to spaceman sequins and Styrofoam eyeballs—emblematic of the Witness album.

Some fans even went as far as to arrive in her stage costumes from the current tour, proudly displaying everything from bedazzled silver veils to sequined body suits. Toddlers, teenagers, and parents alike toted light sticks and glowing headbands, equally alight with fervor and excitement to watch the singer perform—a testament to the fact that while Katy has been in the industry for more than a decade, she’s still an artist can keep old fans hooked while simultaneously converting new generations to her work.

Katy Perry’s concerts are well-known as full-blown theatrical productions, and Witness: The Tour does not disappoint. Foregoing the usual opening act or even the distraction of a pre-show DJ, Katy gets right into the heart of it with a red-hot (as in, the color of the skin-tight, sparkly costume she donned for the opening) and heavy rock rendition of the titular track “Witness.”

Her stunning on-stage reveal was followed by the heady dreampop concoction that is “Roulette,” complete with her back-up dancers in full-force and a stunning parkour performance on larger-than-life dice. The first half of the show continues in the same thread, rife with giant props and undulating dance numbers that make full use of her stage and winding catwalk, a production that is smooth with well-timed segues and lightning-quick costume changes (a staggering total of 6, a majority of them latex bodysuits no less), treating the audience to hits old and new like “Dark Horse,” “Chained to the Rhythm,” “Teenage Dream,” “Hot N Cold,” and “Last Friday Night (TGIF).”

And while the singer’s massive repertoire of chart-topping hits may feel, at some point, a little been-there, seen-that, Katy knows just how to cater to her fans.

The quick wit and quirky humor that she’s known for, combined with the fact that she’s been putting on shows for a majority of her life, turn what could have felt like a too-polished performance of her discography into a celebration of her prolific career instead. 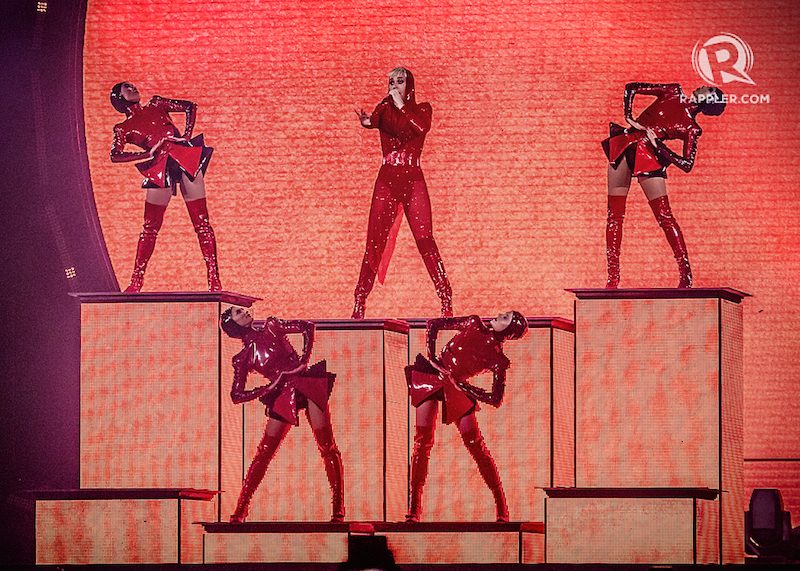 For “California Gurls,” Katy calls on the beloved Left Shark, infamous thanks to the legendary Super Bowl 2015 performance, amping up the theatrics for the crowd before a short interlude in which she invites a very overwhelmed fan onto the stage to learn a bit of Filipino and the once-in-a-lifetime chance to take a selfie with her.

It’s in moments like these that, while pre-meditated and running the risk of seeming completely contrived, Katy sets herself apart from other artists of her stature.

The skit is practiced, but the earnestness of her desire to connect is not.

She is a professional, has done this a million times before, but when she says “mahal kita” (I love you) in stuttering Filipino, there is no doubt in anyone’s mind that she means it. For however much she’s grown over the years – the culmination of which has been shedding her iconic burlesque queen black locks for her current bleached blond boycut – Katy is as wide-eyed and eager to put on a great show for people as she’d been a lifetime ago in 2012, at the very first concert she’d staged here. The show continues with the single that brought her into worldwide consciousness, “I Kissed A Girl,” before another costume change and a series of Burton-esque performances for “Déjà Vu” and “Tsunami.”

The stage, which has been consistently whimsical with inventive prop designs, hits a high with her performance of “E.T.,” in which creatures on stilts accompany her. This sets the tone for the next song, the NSFW “Bon Appétit.” And then, then comes that magical moment that happen so rarely now in concerts, where people actually use their phones for something other than snapping photos and taking videos.

Another smooth transition, and Katy comes back on stage to serenade the audience on acoustic guitar with “Wide Awake,” the entire arena aglow with the modern day version of lighters in the air (that is, with phone flashlights waving), the space awash with the voices of thousands of fans singing along to every heartfelt word. After “Into Me You See,” Katy successfully amps up the crowd again with “Power,” “Part of Me,” “Swish Swish,” and “Roar” before ending the show with a breathtaking performance of “Firework,” complete with confetti stars and actual fireworks on stage.

In total, the show (note: Katy Perry’s performances are always so much more than a mere concert) lasts a little over two hours, but after a decade of growth and the kind of hit-making consistency that other artists are hard-pressed to emulate, it feels like a mere moment before it’s all over. Here’s to hoping we don’t have to wait another 3 years before we get to Witness her next tour. – Rappler.com

(Editor’s note: In an earlier version of this article, we said it was Katy Perry’s 3rd time in Manila for a concert. It’s actually her 4th time in the country. We’d like to ask the purr-giveness of all KatyCats for this oversight.)