Editor’s Note: An earlier version of this story said that EXO used gold mics especially for the Manila concert. This has been corrected.

Xiumin, Sehun, Suho, Kai, Chanyeol, Baekhyun, Chen, and D.O. hyped EXO-Ls by dancing and singing their chart-topping EDM and ballad hits non-stop for almost 3 hours on the multi-LED screen stage fitted with with holographic EXO embellishments and choreographed laser lighting. (READ: Beginner’s guide: Why EXO is out of this world)

The highlight of the show was the performance of EXO’s chart-topping single “Power” complete with the group members in black and red hip-hop attire. The stage was literally on fire as pyrotechnic effects were ignited with the song’s electronic beat. EXO-Ls raved through the dance as silver confetti and smoke filled the pit area. 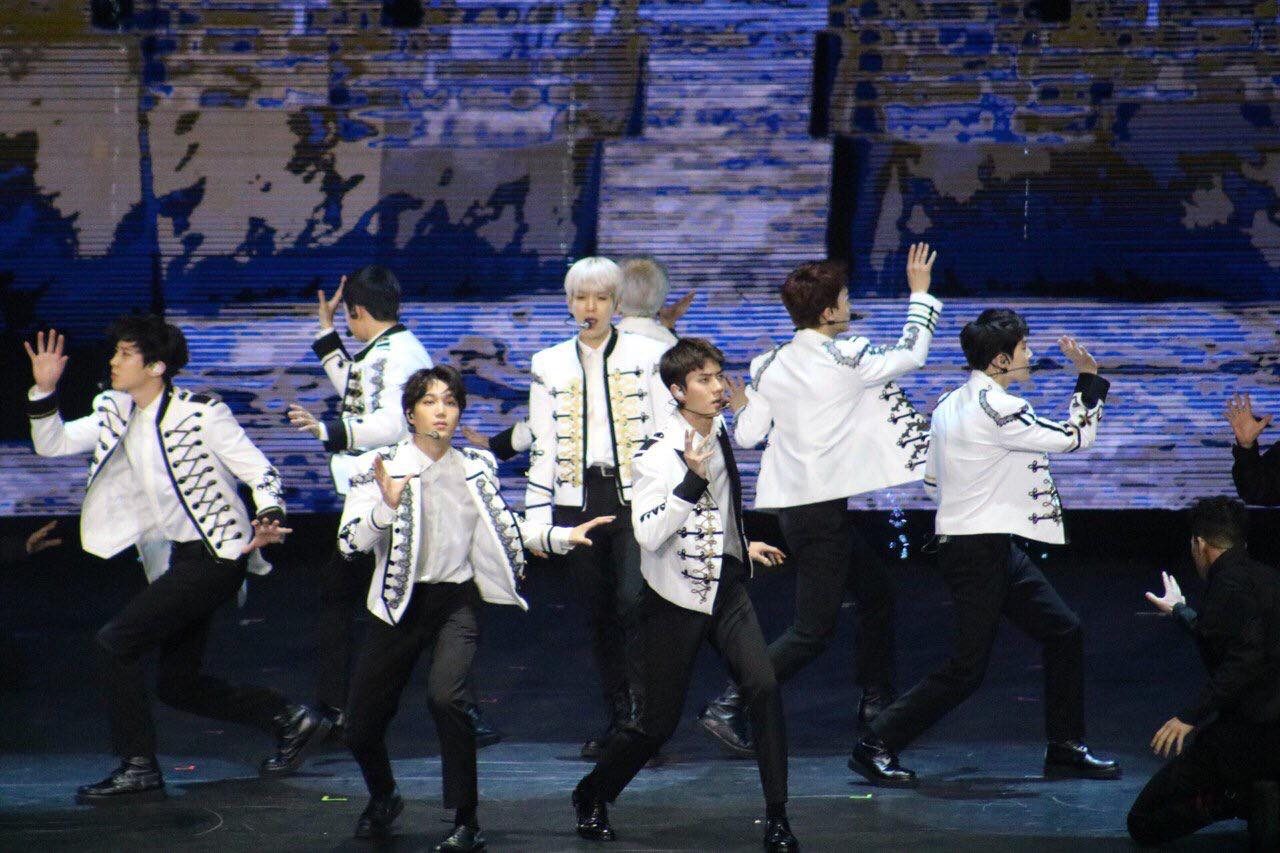 Wearing their famous gold embellished white drummer boy coats, the boys started the show with a fierce and fiery “The Eve” entrance. Normally, the fans would sing fan chants but EXO’s sexy choreography left the Filipino EXO-Ls shouting all through the song.

When the stage’s multi-LED screen stage changed colors from orange-red to galaxy violet, the crowd knew it was time for their famous “Ko Ko Bop” electronic dance music.

Which fan could forget about their breakout single “Growl”? It literally felt like a throwback as EXO danced their originally OT12 song.

The boys used gold EXO microphones for their “Boomerang” song number. They said through their translator that they picked out the mic color “to brighten up the evening.”

They danced, timed with the stage’s hydraulic lift. As soon as they landed, they sang their synthpop house music “Lotto.”

EXO subgroup CBX meanwhile shared a glimpse of their single “Ka-CHING” as other members pulled out Philippine currency-inspired props. The group then sang an eargasmic jazz rendition of “Sing for You.”

The boys, wearing their all-white attire, threw signed EXO balls to the fans as they crooned “Cloud 9” and “What U Do?” During the performance, some of the boys also held fans’ camera phones and took selfies with them. Check it out:

The show ended with performances of power ballads “Don’t Go” and “Angel,” leaving the Filipino fans craving for more.

This moment, I almost cried.

“It’s been a long time since the last time we were on one stage….That’s why this concert is memorable. We enjoyed it very much,” Xiumin shared to the crowd.

Recently, EXO’s sub-unit CBX (Chen, Baekhyun, and Xiumin) were away from the rest of the group, promoting their “Blooming Days” comeback in Japan.

EXO members also shared their love for the Philippines: EXO main dancer Sehun shared he went to the Philippines before the concert for a vacation and Chanyeol meanwhile revealed he recently got his scuba diving license in the country as well.

Did we miss any event highlights? Share them in the comments section below! – Rappler.com