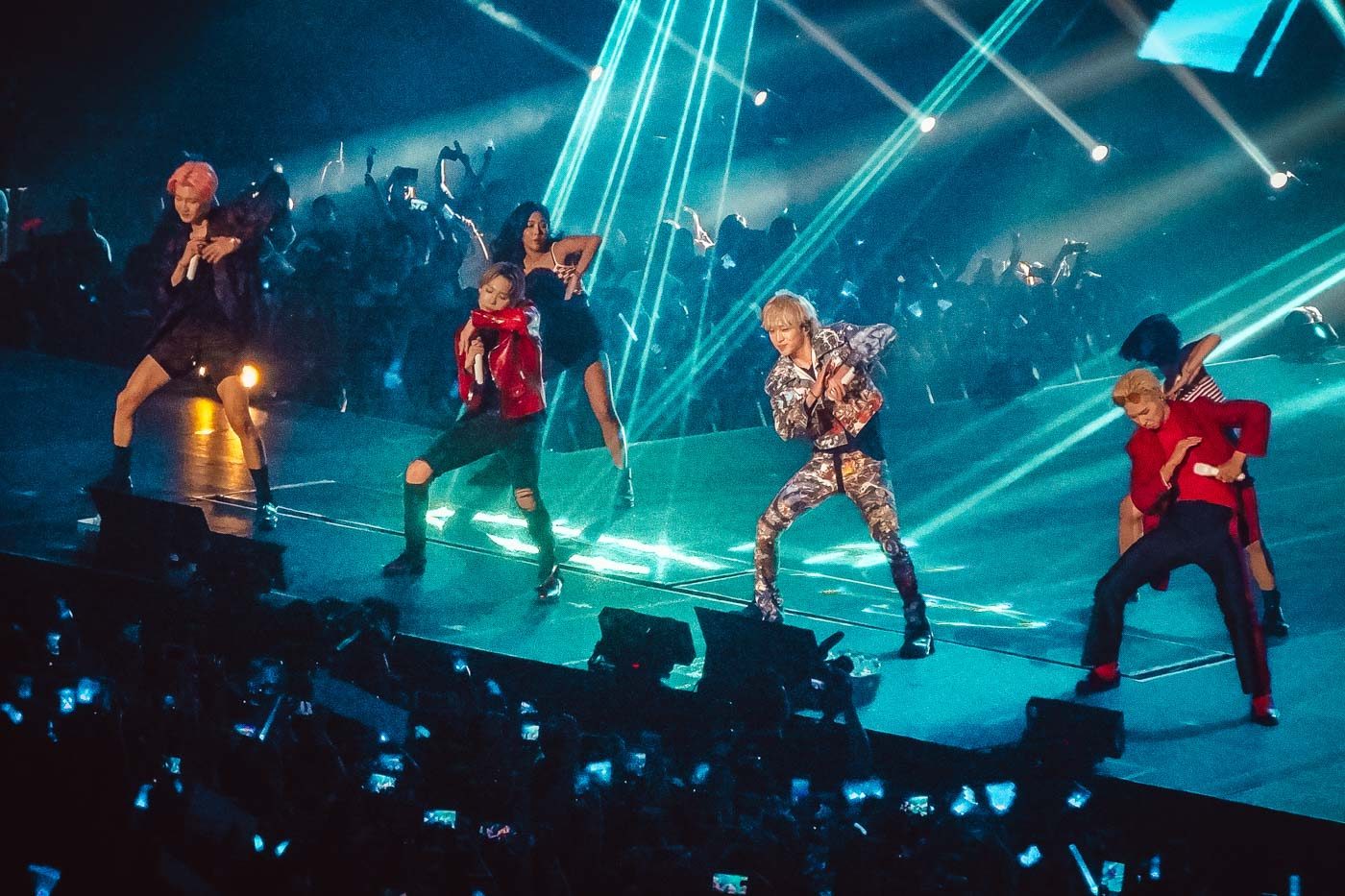 For more than two hours, Yoon (Kang Seung-yoon), Mino (Song Min-ho), Hoony (Lee Seung-hoon), and Jinu (Kim Jin-woo) serenaded their Filipino fans (collectively known as Inner Circle) with their songs, most of which came from their latest album Everyd4y.

They opened the show with “Empty,” a track from their debut album 2014 S/S, and followed that up with “Air.”

After the first two songs, it was time for the introductions. As they greeted the fans, the group made sure to show off their newly-learned Filipino words:

WINNER then went on to sing two songs from their latest album: “Hello,” and the title track, “Everyday.”

Mino left the stage after “Everyday” to prepare for his solo stage. During the intermission, Yoon, who has been practicing his English, played host and interviewed Hoony and Jinu about the Philippines.

While Mino prepared for his solo stage, Yoon, Hoony, and Jinu entertained the crowd. They talked about Jollibee, their recent El Nido trip, and the ads they saw around MOA. #WINNERinManila pic.twitter.com/PF7UGwI360

“Jollibee was good as always,” Yoon said after explaining that it was Hoony who bought them food from the popular fast-food chain. Each WINNER member prepared a solo stage for the concert, starting with Mino who sang his songs “Body” (from the album The MOBB) and “Turn Off the Light.”

Meanwhile, Jinu, who is a self-confessed G-Dragon fan, sang his own rendition of
“Untitled, 2014,” off the Big Bang member’s solo album, Kwon Ji Yong.

Yoon showed his vocal prowess with his own song “It Rains,” and a quick cover of Lauv’s “I Like Me Better.” He also played the guitar as he sang his popular rendition of “Instinctively.”

The last solo stage featured Hoony’s “Serenade,” and his own version of Taeyang’s “Ringa Linga,” which had the resident WINNER dancer hitting the floor with his amazing dance moves.

After the solo stages, the group belted out their Everyd4y ballads “We Were,” “For,” and “Raining” before proceeding to sing their song for the fans, “Movie Star.”

Don’t think I’ll get over this concert anytime soon. The boys were amazing as I imagined them to be, and more. So much love for #WINNER#WINNERinManila pic.twitter.com/Mjam0sH1mw

As in their past concerts, the group also recorded a funny skit for the fans which was shown during the concert.

After the video, all 4 members returned onstage to sing “Immature” (from their EXIT:E album), “Love Me Love Me” and “Island” (from Our Twenty For), and “Special Night,” before ending with their hits “Really Really” and “La La.”

WINNER's "Immature" performances are always the best because you never know what to expect – like Hoony giving Jinu a piggyback at the start, or all members doing the dance break instead of just one member!!! #WINNERinManila pic.twitter.com/x3rVuCp6lU

When the group left the stage, all the fans at MOA Arena turned off their WINNER light sticks, opened their cellphone flashlights, and sang the chorus of “Movie Star” together until the boys returned to the stage for their encore.

During encore, they went up close and personal with the fans near the stage as they sang “Don’t Flirt,” “Luxury,” “Really Really,” and “Everyday.”

Each member’s parting words were just as personal:

Yoon: “The singer cannot exist if no listeners. If we didn’t have all of you waiting for our music, we would have never made it this far. As much as you have been waiting for us, I hope today will be your happiest day. It was my happiest day. Thank you. And we’ll be back soon with our new album. Thank you, I love you guys. I’ll never forget this [banner] ’til I die.”

Jinu: “Maraming salamat sa inyo! Masaya ako dahil magkasama tayo dito. Sana suportahan ‘nyo kaming Winner. Abangan ‘nyo kami lagi. Mahal ko kayo. Kita tayo ulit! Thank you, always, I love you! Hanggang sa muli!” (Thank you very much to all of you! I’m happy because you were with us here. We hope you’ll keep supporting us. Watch out for us always. I love you. Let’s see each other again! Until next time!)

Your beautiful voices, beautiful smiles.. I'll never forget it!! Thank u for making wonderful memories we love u philippines and Special thanks to @daraxxi (She sent a congratulatory video for PHICs) Day after tomorrow is her birthday so please congratz on her birthday #2018everywheretour #inMANILA

Were you part of “WINNER 2018 Everywhere Tour in Manila”? What did you think of the show? Let us know in the comments section below! – Rappler.com