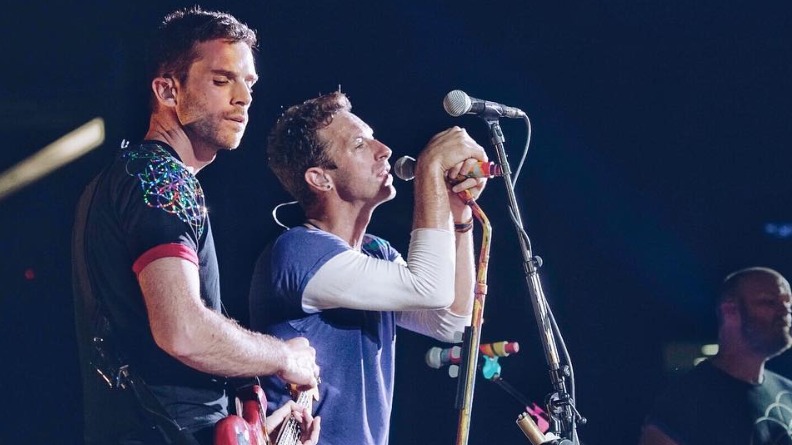 The World Wildlife Fund (WWF) praised the move, as the group released its latest album – Everyday Life – with only two gigs, both in the Jordanian capital Amman.

The performances, staged at sunrise and sunset without an audience, were broadcast free on YouTube.

“It is fantastic to see world famous artists stepping up to protect the planet,” said the head of climate change at WWF, Gareth Redmond-King.

“We all have a responsibility to lead by example in the face of this climate and nature crisis – inaction is not an option if we are to preserve our planet for future generations.”

Coldplay frontman Chris Martin told the BBC they would not tour until they had figured out how concerts could be more “sustainable”.

He listed the amount of flying required and the use of items such as plastic water bottles as the band’s primary concerns over touring.

Activists say international music tours impact heavily on the environment, with concern about the amount of electricity used to power stadiums to waste generated by concert-goers.

Coldplay played 122 shows around the world across 8 legs as part of the tour for their last album, A Head Full of Dreams.”

Martin said if the band do eventually hit the road for the new release, they hope the tour could be entirely carbon neutral.

The band is set to perform another one-off concert next Monday at London’s Natural History Museum, with the proceeds donated to an environmental charity.

Cleaning up their acts

Coldplay’s decision is the latest example of bands and the wider entertainment industry responding to growing concern about the climate crisis.

US teenage sensation Billie Eilish revealed last month that she had tried to make her world tour “as green as possible”  with the help of a non-profit consultancy.

The singer told chat-show host Jimmy Fallon she had banned plastic straws and urged fans to bring their own refillable water bottles and to utilise recycling bins at venues.

On her next world tour starting in March, every site will feature an “eco-village” where concert-goers can learn about environmentalism, she said.

Meanwhile The 1975, another British band, which this year collaborated with Swedish climate change icon Greta Thunberg, are also trying to move towards carbon-neutral touring.

It pledged in September to plant a tree for every ticket sold ahead of their upcoming tour of Britain and Ireland.

Teenage activist Thunberg refuses to fly because of the carbon emissions involved. In September, she travelled to a UN climate conference in New York by boat. She is currently sailing back to Europe.

In Britain, live music events account for 405,000 tons of greenhouse emissions, according to the campaign group Global Citizen, which stages its own zero-waste festivals.

Powerful Thinking, a think-tank focused on the festival industry, estimates the events generate some 23,500 tons of waste each year in the country.

This has led dozens of Britain’s biggest festivals to try to clean up their acts, initiating everything from bans on single-use plastic to using renewable energy sources.

Glastonbury Festival, staged every June on a farm in western England, is partnering with charities such as Greenpeace, Oxfam, and WaterAid to improve its sustainability.

Organizers even deployed portable toilets that utilize technology to convert urine into electricity at this year’s festival. – Rappler.com