Catch Dicta License, Pedicab, and Orange and Lemons at this gig in Pioneer Street

Mar 4, 2020 7:55 AM PHT
Rappler.com
Facebook Twitter Copy URL
Copied
Celebrate 'Paghilom, 'Tugish Takish,' and 'Strike Whilst The Iron Is Hot' all on one special night 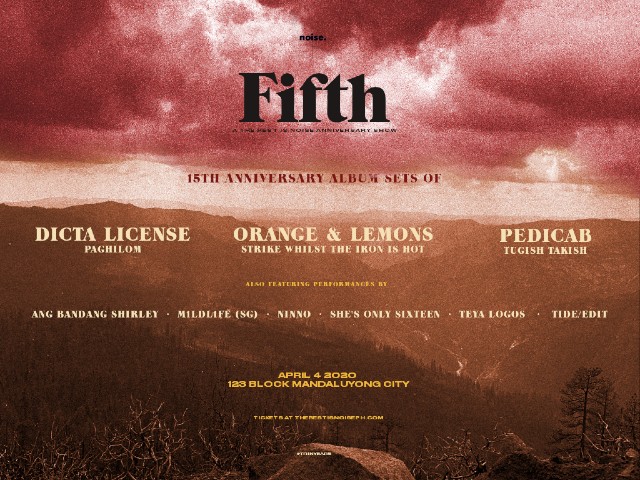 The gig, produced by The Rest is Noise (TRIN), includes special long sets by Dicta License to celebrate Paghilom, Pedicab to celebrate their debut album Tugish Takish, and Orange and Lemon’s iconic Strike Whilst The Iron Is Hot.

All 3 albums turn 15 this year, with Manila-based production team The Rest is Noise celebrating its 5th anniversary.

Tickets are on sale on The Rest is Noise’s website. Pre-sale rates are at P350 until March 16 or until supplies last. Regular tickets will be told on-site and at Linya-Linya’s SM Megamall branch from March 17 to April 2 at P450. Limited tickets will be sold at the venue itself for P500. – Rappler.com