Imago back with new album ‘Kapit’ 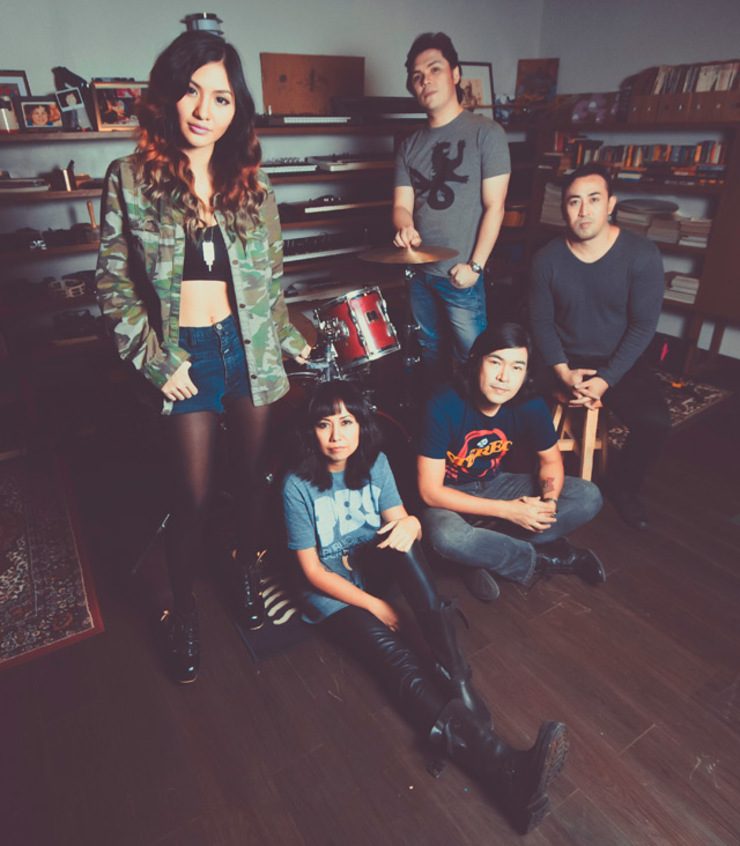 MANILA, Philippines – Bands come and go but for pop rock band Imago, they’ve proven their worth in the industry.

Fans were saddened last year  by the departure of the group’s original vocalist Aia de Leon who left to pursue a solo act. But the group is now back and with a new album titled Kapit. Adding to that, a new vocalist was introduced in the person of Mayumi Gomez and Mervin Panganiban on drums.

Zach Lucero  has now swtiched to guitar duties while Tim Cacho does lead guitar and Myrene Academia on bass.

“What is special about this (album) is our new line-up. What is also special about it is the songs –hinugot namin talaga siya sa damdamin namin at nilabas namin,” Zach said.

(What is also special about it is the songs.We really took it from our emotions and let it out.)

Myrene on the other hand said the songs in their album has the “honesty and the emotions,” which she said it speaks for.

For Mayumi, she had no adjustments in joining the group. Following the departure of Aia, she admitted to being concerned about the crowd accepting her as the new vocalist of the band.

“Siguro yung big adjustment is the crowd kung paano i-aaccept yung persona as the new vocalist of Imago but as a band we are doing okay,” Mayumi said.

(I guess the big adjustment is the crowd, how they will accept my persona as the new vocalist of Imago, but as a band we are okay.)

A brief profile about Mayumi on her Facebook account shows her music influences including Lily Allen, Katy Perry, Japanese singers sunch as Shina Ringo and Utada Hikaru. A former solo artist, Mayumi said that she also used to be in a band.

Zach said that when they heard Mayumi’s voice, it was different. Describing it as “quite dark,” they know they’ve found their new vocalist.

Keeping up with technology

Although some are concerned about the future of Filipino music, Zach said that 2014 was the year of many bands and artists.

“We’ve seen the number of artists with releases and albums this year. You’ll be surprised because of technology, demos left and right are coming out on online media,” he said.

Zach described the role of online media as “heartening,” saying that it has been a big help and at the same time, where they see musci going.

Song leakages maybe a problem for recording companies and their artists, but for the group, they see it very positive.

“The more people hear it, the more we like it. The wider the reach, the better for us,” Myrene said.

“In terms of media, everything is impatient. They (the fans) want it now. For us, we share the music. We’re not going to say that its just for us,” Zach added.

Recently, the music video for their single “Kapit” was uploaded on YouTube and has 20,849 views. While many fans have expressed their sadness over Aia’s departure last year to pursue a solo career, fans have welcomed Mayumi with open arms.

With 8 tracks on the album, Imago fans will surely recognize the familiar sound the group is accustomed too. The album is produced by no less than Raimund Marasigan of Sandwich and Eraserheads fame.

What do they think of today’s generation when it comes to music?

“The next generation has a very short attention span. The taste nowadays is okay and its evolving,” Zach said.

Now that they are back on the scene, Zach said to expect go music from them. They are now in the process of preparing not only for a bar tour but also school gigs, and hopefully share their music outside of the country.

With a new album, a new line up, and new music to share to fans, Imago is here and they will surely rock the scene once more.  – Rappler.com