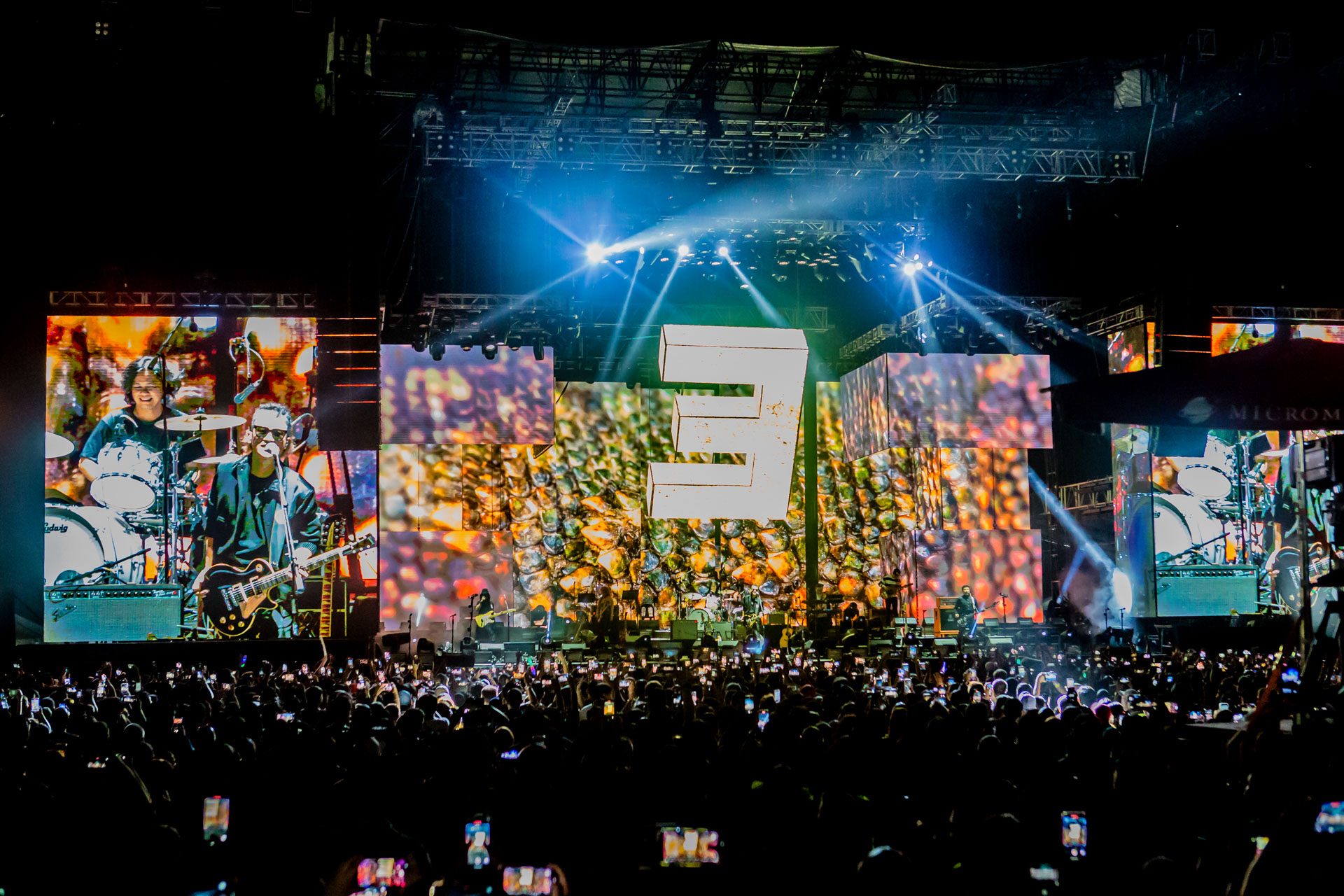 THE GIANT E. The stage design was intense and immense. Stephen Lavoie/Rappler

MANILA, Philippines – Music history was made on Thursday, December 22 as the four former members of the Eraserheads – Ely Buendia, Raymund Marasigan, Buddy Zabala, and Marcus Adoro – reunited for Ang Huling El Bimbo, their first full concert since 2009, and supposedly their last one ever – at least in the Philippines.

The significance of the show was not lost on Eraserheads fans who made their way to the SMDC Festival Grounds in Paranaque, facing holiday traffic, the threat of rain, and the ghosts of Ben&Ben’s homecoming concert logistics nightmares. (Ultimately, there was a lot of traffic, but no rain, and no logistical nightmares, unless you count the very long queues at the portalets.) 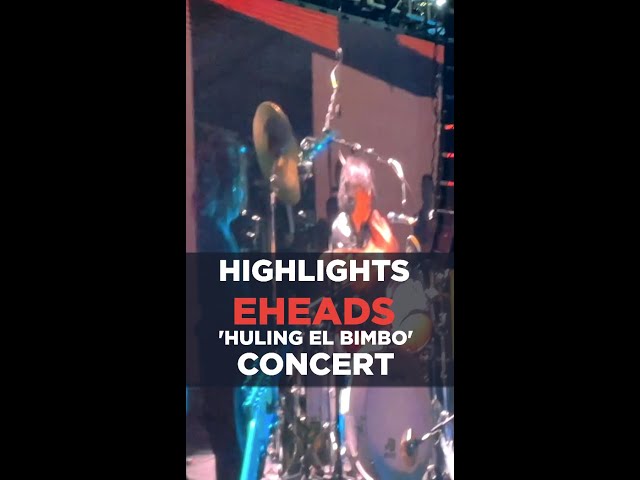 Before the show, The Diegos, the DJ duo made up of Diego Castillo and Diego Mapa, spun tunes to keep the crowd hyped up – not that people needed hyping. The crowd – made up mostly of elder millennials and Gen Xers – cheered at any sign of movement from the stage.

A little after 8:30 pm, the stage dimmed, and the band’s logo, a giant inverted E, lowered from the rafters. This E would hover over the band throughout the show – a cosmic presence, like the Space Odyssey monolith or the UFO from Nope.

The stage lit up with the familiar opening riff of  “Superproxy” – the band’s song about being so stressed out with life that it makes sense to hire someone to act on your behalf. The concert went epic from the get-go as the band’s original co-collaborator, the late master rapper Francis Magalona, made an appearance via hologram with his sons Elmo and Arkin and Ely’s son Eon joining in to rap.

From the get-go, Ely was the consummate frontman, hyping the crowd in his own Ely way. Buddy was cool and collected. Raymund radiated joy – smiling widely and laughing as he played the drums and even took over vocals for “Paru-Parong Ningning.” Beset with controversy after being accused of emotional abuse by his daughter, Marcus stayed mostly out of the spotlight, save for guitar solos on several songs.

What followed was pretty much the entirety of the band’s 1995 album Cutterpillow, performed in the same order that the songs appear on the album, save for the last track, “Ang Huling El Bimbo,” which would obviously be played as a closer, like it was always meant to be. As a result, crowd favorites like “Overdrive” and “Huwag Mo Nang Itanong” were ticked off the setlist early on, and the first act ended with Ely crooning tenderly on “Fill Her.”

A 30-minute intermission featured the University of the Philippines Pep Squad (a nod to the university where the four band members met), and a roving dance camera to keep the crowd on their toes. Having a countdown timer on the screens for the break was a thoughtful touch, as if to make sure that everyone gets back to their spots by the time the band returns on stage.

The second act of the show opened with a video montage of the Eraserheads through the years, giving way to “Pop Machine” and the irony of Ely singing the refrain, “Kailan ba ako magkakapera? Kailan ba ako makikilala?” to thousands of people who paid good money to see him play.

Composer Mel Villena and the AMP Orchestra joined the band for the second act, and Ely took the time to introduce them, along with their A-list sessionists: Ciudad’s Mikey Amistoso, Itchyworms’ Jazz Nicolas, General Luna’s Audry Dionisio, and cast members of the Eraserheads jukebox musical Ang Huling El Bimbo.

The show continued with the rousing “Ligaya,” “Lightyears,” “Saturn Return” (for which nepo babies Arkin and Eon returned to the stage), and “Maling Akala.”

The show slowed down nicely with Buddy going solo on “Tama Ka,” the song he penned with his wife, writer Earnest Mangulabnan Zabala, before an affecting rendition of the anthemic “With A Smile,” which left the crowd swaying and holding their companions just a little closer.

Just as people were lulled into an introspective moment, the band broke out the heart thumper that is “Insomnya,” building the adrenaline yet again for their next guest, Mr. Pure Energy himself, Gary Valenciano. The 58-year old bounded on stage, biceps in full view, as he sang, danced, and played percussion for “Christmas Party.”

Seeing Gary V’s theater kid eagerness mixed with the ‘Heads rockstar coolness on perhaps the least Eraserheads-y Eraserheads song was definitely one of the high points of the show. It was followed by “Spolarium” and “Magasin,” where the audience sung the entire first and last verses, then the stage dimmed again for another break.

“Pare Ko” – the song that shot the band to fame in the ‘90s – opened the final act of the concert. Raymund stepped away from the drums and recorded the crowd with a camera, though as he passed by Ely, the frontman pulled him to the mic and got him to sing a verse. And of course the audience gladly chimed in with the requisite “Tangina!” at the song’s chorus.

Ely then took a moment to talk about memories and friendship, even getting the crowd to stop and hug each other, and the band launched into the opening melodies of “Alapaap.” The crowd got as far as singing along to the first few lines before the band stopped, Raymund admitting that he skipped a song on their setlist

Going back on script, the band performed “Minsan” before finally heading into the spacey “Alapaap,” and just like that, they were down to their last song, which of course had to be “Ang Huling El Bimbo.” As predictable as the closing song choice was, the performance was full of surprises – towards the final refrains, fireworks shot into the sky, and kept going, well until the the last “nanananaaa” had been sung.

It would’ve been the perfect swan song – though apparently, a world tour had been announced on screen before the show began. Regardless, given the band member’s own careers and separate lives, it’s clear that this coming together is not something we’ll see a lot of, especially not at this level – well-organized, well-executed, and downright spectacular.

An audience member, James, told this writer at the break that one of the reasons he loves the band is because of their friendship. He had been listening to the ‘Heads since he was in high school, and has been a fan ever since.

“It looks like they have a real relationship, and it reflects in their songs,” he said. Many loved the band for the same reason, and their hearts were broken a few years ago when Ely pointed out that the band members weren’t really close friends.

By the end of the show, it was clear that whatever unique dynamic they have has always had the power to keep a crowd of thousands singing. The Eraserheads don’t need to be friends. They just need to be the Eraserheads. – Rappler.com