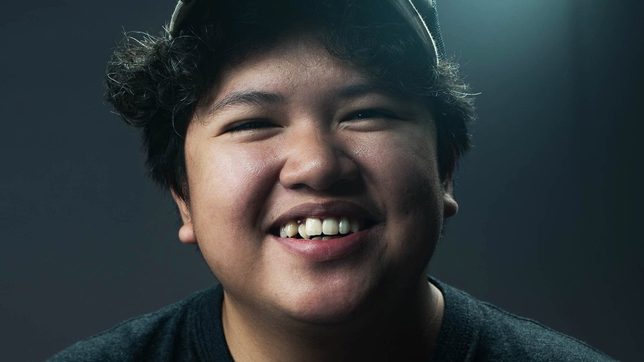 VISPOP. Jerika Teodoriko is a household name in Cebu's wide roster of Vispop artists and is best known for her song 'Labyu Langga.'

Born and raised in the quiet neighborhood of Talamban, Cebu City, Jerika Teodorico, one of Cebu’s most beloved artists, learned to love songwriting and the happy nostalgia that Vispop music brings to people.

At a young age, Jerika was exposed to the rhythm and rhyme by her music-loving parents, who enjoyed listening to The Beatles and The Carpenters over the radio. In a way, this shaped the overall acoustic melody of her iconic songs like “Labyu Langga” and “Baklay.”

“Actually, I started songwriting when I was in [kindergarten]. We had a VCD of Toy Story and I would always listen to Randy Newman’s song which inspired me to write,” Jerika told Rappler in an interview.

She was referring to the 1995 classic, “You’ve Got a Friend in Me” – a song that built the childhood of so many millennials and Gen Zs all over the world.

“I really loved the song, but because my vocabulary was so little as a kid, I would sing along to the song but couldn’t get the lyrics, just the ‘You’ve got a friend in me’ part. I retained the refrain but for the rest, I changed the lyrics with my own,” she said.

The young Jerika would go on to write her own lyrics of other great songs during her college days at Cebu Normal University until eventually, in 2013, the artist won Vispop 2.0 with “Labyu Langga.”

It was also at this time when Cebuano artists like Kurt Fick, Lourdes Maglinte, Mandaue Nights, and others banded together to weave their cultural identity into a rising genre which we now know as “Visayan Pop,” more commonly known as Vispop.

In fact, according to Jerika, it was Jude Gitamondoc, the founder of Cebu’s biggest songwriting competition, who encouraged her to join the Vispop competition and write in the Cebuano language.

“He would often joke about it. He would say that I really wrote and sang better in Bisaya,” she said.

Jerika recalled that in her college days, she would often write lyrics in English. She eventually embraced the Cebuano language when her literature teacher Therese Villarante, also a well-known musician and composer in Cebu, encouraged her class to try Cebuano songwriting.

The artist remarked how beautiful the language was as there were always “more words to discover,” describing Cebuano songwriting as something that was “near limitless.”

This idea pushed Jerika to prove to her family and friends that Cebuano songwriting was a worthy profession and definitely something to earn from.

Since then, Jerika Teodorico became a household name in music festivals, workshops, and even university celebrations. Cebuanos from all over the province wanted to hear Jerika perform and sing along to her greatest hits.

At her first gig (where she actually proxied for an artist) with 22 Tango Records, an independent record label owned by the talented Cebuana Cattski Espina, Jerika was in awe after seeing how audiences responded with the same love and passion she had for Vispop.

“Their audience wouldn’t just listen to the hit songs. They would stay there and listen to the other songs we kept in the vault as well,” she said in Cebuano.

After that performance, Jerika made it her mission to write more songs in Cebuano and continue to give Vispop the exposure it deserves.

For now, with the pandemic still ongoing, Jerika wishes to finish her first album soon and be able to work on her room at the same time.

“I want to improve the way my room looks. I want to create an environment for myself. I want it to be conducive for the stuff I’m going to be doing,” she said.

“After my album, which will release early 2022, I’m planning to write songs for other artists. I think collabs with musicians that I love like Lourdes, Kurt Fick, and even for Missing Filemon,” she said.

One of the first Vispop songs Jerika wrote, “Labyu Langga,” defined a generation of Vispop-loving Filipino music buffs and started the path that the artist has been walking on for a long time now.

The song officially released in 2015, along with other songs like “Imong Bayani” by Ralph Mallapre and “Intergalactic Gugma” by Tony Alfonso and Kaye Dinauto. This was also the song that gave Jerika her first win in Vispop 2.0.

(“Langga” came from my family because my family calls me “pangga.” The term of endearment “pangga” is obsolete but I still like to use it so I alliterated it to “langga.”)

In hindsight, Jerika believes that what made the song a hit was because of its simplicity and jazzy roots.

Released in 2016, Baklay first started out as a short poem Jerika wrote in a poet’s guild in college.

“I remember first that every end of the week, we would have a sharing of what we wrote. I wrote a short poem on the day entitled ‘Uptown to Downtown,'” she said.

The original poem was dedicated to a very significant person she spent time with during her college days. Eventually, Jerika decided that it was about time to bring the poem out of the shelf and turn it into a nostalgic country song.

“It was timing when Jason Mraz wrote ‘Long Drive.’ I wanted a Bisaya version of that. Didto gasugod ang ‘Baklay‘ (That’s where ‘Baklay’ started),” she said.

While the song features iconic places in Cebu, Jerika said that the song wasn’t actually intended to be touristy and that it was actually about walking and spending time with a friend.

“It’s really about spending time with someone you value,” she added.

“After ‘Baklay,’ there was a phase with ‘Anino,’ poetic daw ko nga bisaya (they say I was sort of a poetic bisaya),” Jerika said.

Released in 2017, “Anino” was known for its strong use of idiomatic expressions and western country flavor, although it was loved most by fans for being a heartbreak song.

Being the humble artist that she is, Jerika said that the song was purely experimental.

Released in 2019, “Ihatod Tika,” as Jerika puts it, was a song not meant for the stage but for the artist, for herself.

“I met a certain someone in 2018 who had a huge impact on me. I started writing songs about them. ‘Ihatod Tika’ was a personal song and it was meant for this person,” she said.

According to Jerika, this was a song that really showed her growth from her first few hits, starting from “Baklay.”

“From ‘Baklay,’ I was just walking this someone, and now with ‘Ihatod Tika,’ it’s a Jerika who can now afford to pay for someone’s way back home,” she said.

The song was written in January 1, 2019, a day after Jerika’s birthday. According to her, the goal of this song was to let that person know their impact on her life and career.

Conceived during her early college years, “Downtown Disco” – or “DD” as Jerika likes to call it – was a four-year project meant to be a shoutout to the lifestyle of Colon, the downtown center of Cebu City.

“Colon has a certain vibe, it gives me a certain feeling. At the same time, I had an obsession with Abba and I loved ‘Dancing Queen.’ I wanted to write something new, something disco, and about Colon,” said Jerika.

While it’s not explicitly stated, the main melody of the song was actually inspired by the sound of a rhythm guitar of a song she heard from a TV advertisement.

Another fun fact about the song is that Jerika intentionally wanted to contribute to a micro group of songs in the Vispop community that had a “Woah” line in their lyrics.

Still, Jerika emphasized how the song was really meant to describe the flavor of the downtown center and how the lifestyle could be told in a song for those who’ve never even been to Cebu City.

“‘DD’ is not just a song but also a philosophy for people who live in Colon,” she said.

Listen to the song on Spotify here. – Rappler.com