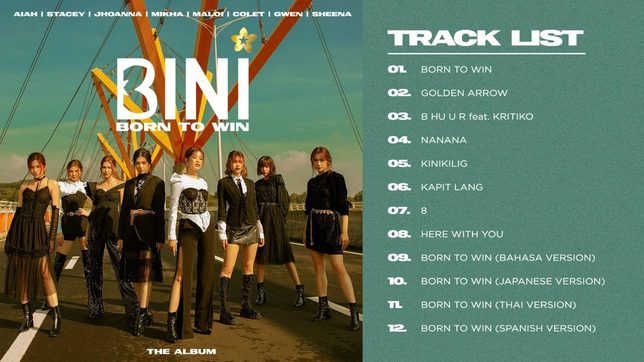 P-pop girl group BINI hit a new milestone with the release of their debut album, Born To Win, on Friday, October 15.

The album opens with their anthemic title track, “Born To Win,” with international versions in Bahasa, Japanese, Thai, and Spanish also included.

Also included in the album is the group’s previous release, “Kapit Lang,” and their latest single, “Golden Arrow” – the music video of which was released along with the album.

The album also contains brand new tracks “B HU U R” featuring rapper KRITIKO, “Nanana,” “Kinikilig,” “8,” and “Here With You.”

The album comes as the group prepares for their first concert – a joint show with sibling group BGYO, streaming on November 6 and 7 on KTX.

BINI is made up of Jhoanna, Colet, Maloi, Aiah, Stacey, Gwen, Mikha, and Sheena. They were officially launched in June but made waves with their pre-debut single, their version of the hit novelty song “Da Coconut Nut.”

Listen to Born To Win here: