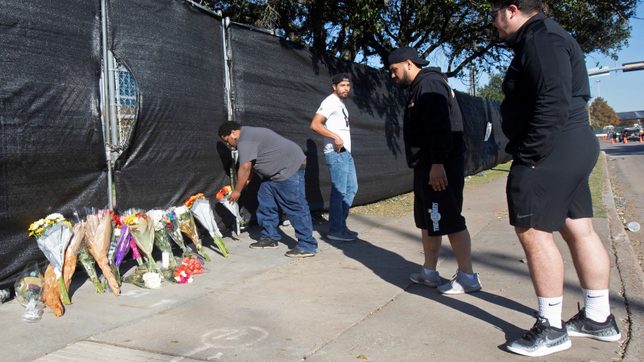 Matthew Shelton, Diego Rivera, Anthony Perez and Juan Carillo place flowers on a gate to NRG Park, after a deadly crush of fans during a performance at the Astroworld Festival by rapper Travis Scott in Houston, Texas, USA.

Facebook Twitter Copy URL
Copied
Eyewitnesses say that there were 'chaos' even before the main act took the stage at the Astroworld Festival, that left at least eight attendees dead

Crowds surging forward as the main performer took to the stage at the Astroworld Festival led to chaos and crushed bodies in the darkness of the outdoor concert, say attendees who escaped the tragedy on Friday night, November 5.

At least eight people died and scores were injured during the first day of a weekend event that attracted tens of thousands. Police have opened a criminal investigation. About 300 people were treated for injuries including 11 taken to hospitals suffering from cardiac arrest.

Eyewitnesses interviewed by Reuters pointed to fans being crushed and trampled at times during the day, before the main act took the stage. The crowd was already on edge and throwing water bottles when faced with choke points at a COVID-19 test center and merchandise sales areas, attendees said.

There was “chaos” throughout the day as crowds overwhelmed the facilities and security on site, said Anthony Mendiola, 22, from San Antonio, Texas. While police and security teams were present throughout the park, “there just wasn’t enough,” he said.

There were 528 Houston police and 755 private security members hired by festival organizer Live Nation working at the event, Houston Mayor Sylvester Turner said at a briefing on Saturday, November 6.

“It felt like a riot. There were people throwing out stuff, objects flying everywhere,” said Albert Merza, 43, a supermarket manager, who saw fans attempting to jump fences to get inside and a “lot of crazy behavior.”

A countdown clock that signaled headliner Travis Scott was to perform that night pulled scores toward the main stage, crushing fans at the front, said Jonathan De Leon, who moved away as fans up front were pushed from behind, some falling to the ground.

Job Ramos, 21, from Kennewick, Washington, also had attended last month’s Rolling Loud festival in New York, which billed itself as the world’s largest rap festival. Houston’s had more people, he said, and the mosh pits where fans dance and jump were frightening enough to keep the regular concert-goer away.

“All of a sudden it was like there was 13 mosh pits,” said Longoria. “People were falling down” into piles, he said, including one woman who fell to the ground and was covered by three others who toppled after her.

“It’s not easy getting out of those mosh pits,” said Ramos. “When you’re in a mosh pit, you feel like you can’t get oxygen. All you are breathing is CO2.” – Rappler.com