‘How music should be enjoyed’: Music festivals back with a bang at Salo-Salo Fest 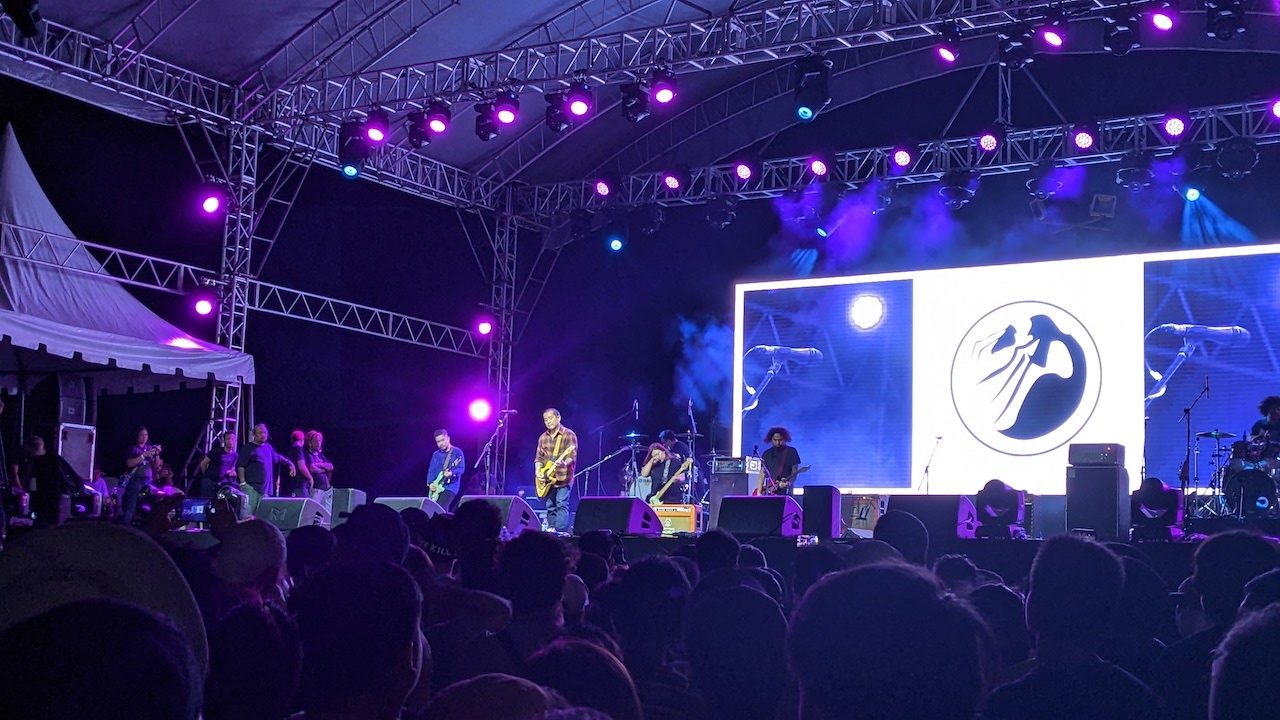 Facebook Twitter Copy URL
Copied
Have you ever come down from a rollercoaster-induced adrenaline high to the sound of a rock band playing live?

MANILA, Philippines – Two years without live music is way too long, so one can imagine the collective sigh of relief from musicians, fans, and the industry when gigs and concerts slowly but surely returned this year.

Even music festivals – conceivably the toughest live music event to mount simply for the sheer number of moving parts involved – made a comeback this year, so much so that music fans were even introduced to a new concept: a theme park music festival.

If you think about it, theme parks are the perfect venue for music festivals. You have everything that a music festival needs: a wide selection of food and drinks (and even themed restaurants!), built-in activities (eg: rides!), and perhaps most importantly, actual bathrooms – no disgusting portaloos with endless queues.

The theme park concept was the draw for Salo-Salo Fest, which promised unlimited rides to go with a generous lineup made up of both OPM legends, up-and-coming stars, and even a couple of foreign acts.

The festival was held from December 2 to 4 at the country’s biggest theme park.

Salo-Salo Fest had a two-stage set-up, which seemed key to the festival not going overtime as these events tend to do.

The first, the Salo-Salo stage, was an outdoor stage set up next to the park’s infamous extreme rollercoaster, so that people’s panicked screams played on loop in the background as artists performed. The outdoor stage was where the more established OPM acts performed – the likes of Rico Blanco, Barbie Almalbis, Moonstar88, Orange & Lemons, Ebe Dancel, Ely Buendia, Urbandub, Mayonnaise, and Parokya ni Edgar.

The second stage, called the Parol stage, was on the other end of the park – an indoor set-up at an event tent. Dim and airconditioned, it was a nice respite from the deluge of sights, sounds, and sensations outside. This, it seemed, was the stage for the up-and-comers – Ena Mori, Arthur Nery, Zild, Clara Benin, and Unique Salonga, as well as American acts Joan and Johnny Stimson.

Each stage was a decidedly different experience so it actually felt like you were going to two different music festivals. The connecting thread, of course, was the theme park’s rides.

Shuttling from one stage to another, it was impossible to ignore the rollercoasters, the spinning pendulum, the acrobatic planes. Getting on one meant in-between sets was a trip. Ultimately, there’s nothing like coming down from an adrenaline rush to the sound of, say, Zild’s kooky, trippy rock, or a hundred other voices screaming the chorus of Urbandub’s “Evidence” back to the band.

Ebe, it seemed, spoke for everyone – musicians and audience alike – when he spoke to the crowd on the second day of the festival.

“I just want to say that for two years you watched me on your tablets, your phones…and it’s so nice to be here right now,” he said.

“This is how music should be enjoyed: with you right in front of me, and me playing your favorite songs, and you guys singing along,” he said.

At Salo-Salo Fest, people were reintroduced not only to how music should be enjoyed, but also to how it could be enjoyed: the genuine connection between artists and listeners, punctuated by periodic adrenaline highs, rollercoaster screams, and the heady magic of a beloved theme park.

With more music festivals on the calendar in 2023 – at the time of writing we’re waiting on a major artist announcement Wanderland Festival – live music is definitely back and, dare we say, here to stay. – Rappler.com