Aug 19, 2020 8:00 PM PHT
Kiara Gorrospe
Facebook Twitter Copy URL
Copied
The Fil-Am rapper talks about how she balances both passions and what she's learned from both working in labs and on-stage

That she worked in a biotech laboratory had never truly a secret about Fil-Am rapper Ruby Ibarra, whose hard-hitting verses on cultural identity and the diaspora have made her a must-listen both online and on-stage.

“I think most people think that I’m a full-time musician because they see me traveling and doing shows,” said Ruby in a Rappler Talk interview that aired on August 11.

But as the world buckled down and sheltered in place because of the coronavirus pandemic, the rapper found her day job in the spotlight – to the surprise of even the most ardent of fans. 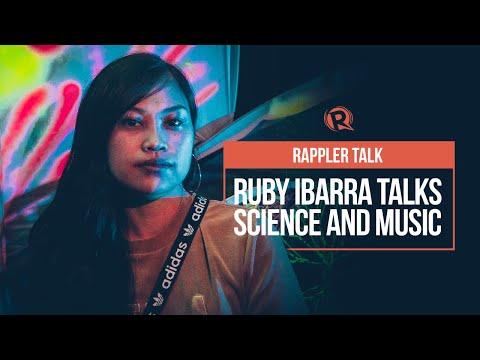 For Ruby, music and science have always coexisted. Pursuing two careers simultaneously hasn’t been an easy task, but she said a sense of focus helps keep priorities in check.

“When you have multiple things that you love, you learn how to make time for each,” she said.

Whether in the lab or in the studio, immersion in the craft is vital to the quality of work she puts out, Ruby said. “[Music and science] are two things that I am not only passionate about, but two things that I feel like I have to give my 100%. Otherwise, it not only affects my work, but it affects other people.”

While Ruby is undoubtedly dedicated to her practice in both fields, to her, music provides an escape that working in science simply doesn’t provide. “I still get a different kind of fulfilment when it comes to writing lyrics, recording songs, and just being face to face. Having that human interaction when I’m performing and doing live shows,” she said.

Music, Ruby said, is where her true calling lies.

The career shift that almost was

There was a time when Ruby considered shifting to music full-time.

“I almost, you know, let that part of my career go, working in biotech. But of course, because of this year, I feel like it’s more important than ever to be working in that field,” said Ruby. To her, working in biotech is means to help and contribute towards addressing pandemic.

The pandemic, of course, has affected both of her chosen careers. In biotech, it means the stakes are much higher – when it comes to health protocols and the urgency of her work. For music, it’s meant a shift in how things have been done.

Ruby has found herself revisting her roots –the “YouTube era [of] people singing in their bedroom.” It’s refreshing, in a way, and gives her a more raw and liberated landscape for music production.

Like most of us, the rapper has learned to take each day as it comes: “[I realized] that everything that I used to think was important wasn’t necessarily as important anymore because, you know, those things aren’t really part of my everyday life anymore, like touring, live interviews.”

“If anything, I think I have learned how to adjust and to pivot and to learn how to go with the flow and just be present in the moment and, you know, learn to accept–most importantly–that it’s okay to not know what tomorrow looks like,” she said. – Rappler.com