A ‘stronger’ Tomorrow X Together wraps up their ‘ACT: LOVE SICK’ world tour in Manila 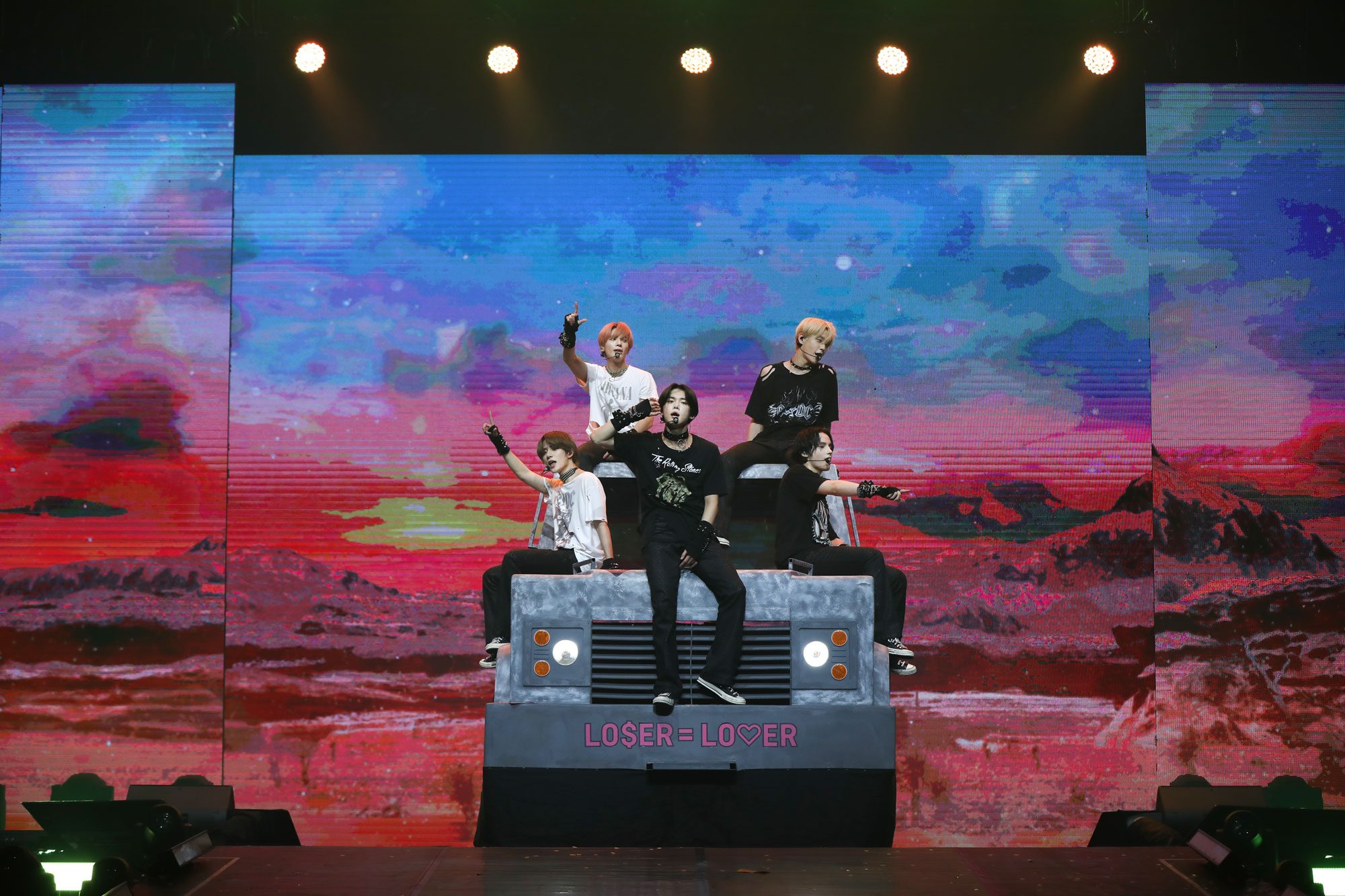 It’s been long overdue, but Filipino MOAs finally had the chance to see K-pop boy group Tomorrow X Together (TXT) grace the Philippine concert scene with a two-night show at the Mall of Asia Arena on October 27 and 28.

Presented by PULP Live World, the Manila shows served as the group’s last stop for ACT: LOVE SICK – their first live concert world tour since their 2019 debut. For nearly four months, the quintet has staged 19 successful concerts in a total of 13 cities worldwide.

“It’s been a while since we performed in front of an audience and we’re so happy that we got the chance to do it today,” they told fans during the Friday show. “We have prepared amazing performances for you all and if we’re being honest, we’re very excited to see how our MOAs will react to it.”

Cheers filled the arena when the group opened the three-hour show with an intense performance of “0X1=Lovesong,” which was quickly followed by more energetic numbers such as “Wishlist,” “Magic,” “New Rules,” and “PUMA.” MOAs in MOA also couldn’t help but vibe along when TXT performed fan favorites “Lo$er=Lover,” “Blue Hour,” “9 and Three Quarters (Run Away),” and “Good Boy Gone Bad.”

In between performances that showcased the group’s powerful dance moves, the set was also complemented with several ballads from the quintet such as “Trust Fund Baby,” “Anti-Romantic,” and “Opening Sequence,” which really highlighted the members’ distinct vocals.

Fans were also treated to subunit stages – “Lonely Boy” for members Yeonjun and Huening Kai, while Soobin, Beomgyu, and Taehyun performed “Thursday’s child has far to go.” “This is the kind of performance that you’ll only be able to see in our concert,” they said.

The amazing stage production and cinematic VCRs also heightened the overall concert experience. TXT, whose first online full-length concert was titled ACT: BOY, continued treating fans to a show with a great and coherent storytelling, letting their discography tell their stories of growth as artists.

“The first world tour was an opportunity for us five members to become a stronger team. Most importantly, words cannot express how grateful we are, as ACT: LOVE SICK would not have come true without our MOAs’ love and support,” they said.

The members also went the extra mile to show their appreciation to their global fans by giving all of their ments in English and even preparing skits in Filipino. Member Taehyun also surprised Filipino MOAs when he sang the chorus of Itchyworms’ hit “Akin Ka Na Lang.”

“I won’t forget the love you showed throughout the whole tour for as long as I live,” member Huening Kai said. The group continued to express their gratitude to their fans who’ve made their first world tour successful: “Nobody but you could ever show the five of us with so much love,” leader Soobin said.

Beomgyu also took the chance to thank each of the members, reminiscing how each of them played a huge role in making the tour memorable for all of them. “I was so happy to be spending time with the group and I can’t wait to see what the future holds,” he said.

Yeonjun added that aside from them growing closer as a group, their first world tour also cemented their relationship with their fans: “It feels like our bond with the MOA is growing stronger too.”

During the encore, Filipino MOAs surprised the group by unveiling a huge banner that read: “You did so well in your first world tour. Mahal namin kayo (We love you), TXT.” Fans also flew paper planes filled with fan-written notes towards the stage, with members picking them up and reading them.

Clearly moved by the fan projects, TXT capped off the show with an impromptu performance of “Our Summer” as they promised the fans that they’ll “come back soon” at “an ever bigger venue” with even “bigger and better performances.”

“We promise that TXT will keep working hard to earn your support,” they said.

“We’ll try even better to be good for you. The next one will be even cooler. And until then, magsasama tayo (we’ll be together) forever,” TXT told fans. “I hope you all stick around to see what’s coming next for us. You won’t want to miss the next chapter.”

It’s a delight to see how much TXT has grown, and ACT: LOVE SICK just affirmed that they still have so much to offer. – Rappler.com